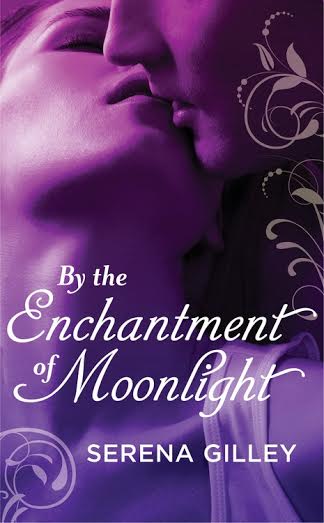 BY THE ENCHANTMENT OF MOONLIGHT by Serena Gilley (February 2, 2016; Forever Yours E-Book; The Forbidden Realm 2.5)

In a world where desire is forbidden and passion can turn deadly, two Fairies begin a dangerous dance with both . . .

Swift, Enforcer for the Fairy Council, knows something is amiss. Not only does he sense the Realm is in danger, but his own magical abilities are under attack. It’s as if his strong, steely will is being replaced by human characteristics like need,want, and lust. Especially after he reunites with his rule-following colleague . . .

A flicker of heat burned inside when he thought of Pimma. She seemed earnest, so fresh…so full of passion for defending the code. He’d been impressed with her professionalism and intellect. He liked the way she smelled, too. Like sunshine on a warm day, like the bud of a rose, just about to open. He shut his eyes and reveled in the memory of her scent.

His body responded immediately. His breathing was labored, his heart rate increased, and his temperature suddenly soared. What was this feeling? Want, need, urgency…desire.

The realization startled him. But how had he suddenly fallen prey to such a carnal, human reaction? He forced himself to shake it off, shoving his thoughts of Pimma’s sweet scent, satiny skin, and delicate features aside. By the Skies, what was happening to him?

But of course he knew. It wasn’t merely his perception of the Fairy Council that had been changed by his experiences in Iceland. He’d been changed, too.

He’d come too close to the very thing he’d sworn to condemn, and now he was hungry for it in a way he couldn’t quite understand. The conspiracy he had found was fueled by desire, stoked by passion. Human lust had infected the Veil and had infected him, too. Desire—hot, carnal, and wild—was awakening inside him and he dreaded what it might do.

Somehow he had to take control of this thing before it took over him completely, the way he’d seen it do to other magical beings. The rogue fairy Kyne abandoned their Realm when he fell into desire. Swift had seen a huge, raging dragon brought low by passion. There was no place in the Forbidden Realm for this sort of thing—it could only bring destruction.

And now Swift felt it pumping through his veins in full force. How could he have let this happen and how was he going to stop it? Even now, his mind wandered back to those tempting thoughts of Pimma, hoping she’d be happy to see him again and wondering how it would feel to stroke the gentle curves of her body, the iridescent sheen of her wings. She’d done nothing to put these thoughts into his head, but he couldn’t seem to get rid of them.

By the Skies, desire had invaded his system and taken root. He simply had to be stronger than this carnal weakness. He was an enforcer, by the Clouds. He was not about to let depravity rule over duty. No matter how good it might feel.

Serena Gilley grew up reading fantasy and fairy tales, and believing there was a distinct possibility that both of them were real. Somewhere. Even all these years later, Serena’s belief in magic and mystery hasn’t diminished. In fact, She is living out her own happily-ever-after with a handsome prince in a beautiful castle, taming dragons and granting wishes every day.  Okay, so the prince is a regular guy, the dragons are really just teenagers, and the wishes she grants are as spectacular as frozen pizza on Friday night, but it’s a fantasy world just the same.