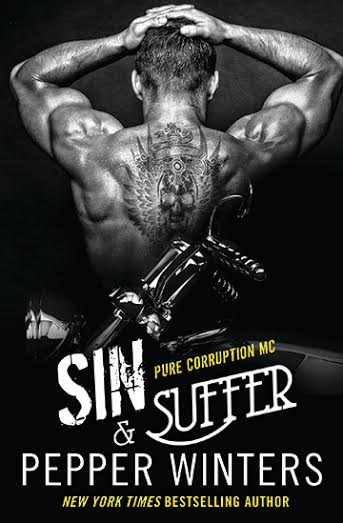 About SIN & SUFFER
“Some say the past is in the past. That vengeance will hurt both innocent and guilty. I never believed those lies. Once my lust for revenge is sated, I’ll say goodbye to hatred. I’ll find a new beginning.”

She came from a past Arthur “Kill” Killian never forgot. She made him sin and made him suffer. She tugged him from the shadows and showed him he wasn’t as dead as he thought. And with her resurrection came betrayal, deceit, and war.

But then they took her. Stole her. Imprisoned her.

Now Kill’s carefully laid plans for vengeance are complete. He craves action, retribution-the blood of his enemies. War has begun. War is all they’ll know until they’ve paid their penance. He will get her back-and rewrite their destiny . . .
Amazon
B&N
iBooks
Kobo
Google Play

“Let’s go.” Mo cocked his head at the undergrowth. “The sooner this is over, the sooner we can blow some shit up and get home.”

I tried to hide my slight sway and the way even the darkness hurt my eyes. But of course, he saw right through it.

Mo came closer. “You’re the prez, Kill. You’re the one pulling the strings on this party. But tonight, let us be the ones in front, yeah?”

Grasshopper froze. I was well known for being on the front line. I never asked others to do what I was afraid to do myself. I shook my head, then stopped immediately.

Swallowing my groan, my shoulders slumped. “Normally, I’d take a swing at you for sprouting such bullshit. But . . . you might be right.”

Honesty was a weakness, but it was also a strength. My men trusted me because I wasn’t stupid. If they had a better idea, I listened. If they had reasons to avoid something, I paid attention.

And this was one of those times.

Grasshopper’s boots crunched a twig as he shifted. “You’re still the boss. We aren’t protecting you or doing shit on your behalf; you’re just doing us a favor by not getting in the way.”

As if anyone believes that shit.

“We’ll get her back, dude. And we’ll destroy those motherfuckers.” Grasshopper slapped a hand on my shoulder.

If it hadn’t have been for Hopper, I might’ve bled out or turned into a damn zucchini before anyone noticed. He’d been the one to pop around when he couldn’t get me on the phone. He was the one who found me passed out.

Mo pulled his gun free and clicked off the safety. “Let’s go.” Like an evil spirit, he dissolved into the tree line.

Grasshopper took off after him, leaving me to bring up the rear—like a rookie or some idiotic prospect.

The trees were watchdogs.

The shadows were death’s pockets to hide in.

We remained silent as we merged with the darkness, slinking stealthily through leaves and cobwebs.

Every step throbbed my head.

Every duck to avoid branches sent queasiness splashing through my skull.

Cleo was nearby and we were about to rescue her.

That was all the incentive I needed to do my fucking job as a Pure Corruption president and lover to my woman.

I’m stronger than a damn concussion.

However, the closer we got to the large wooden fence barricading Dagger Rose, the more I feared I might not be a help but a hindrance. Mo was right to put me at the back. My muscles trembled and the cold sweat of illness never let up. I could barely stomach the pain of walking, let alone running into battle and firing a loud gun.

Moving past the glade where I’d brought Cleo, my fists tightened as I recalled her peering through the hole in the fence and witnessing her old home.

My stomach convulsed as a rancid thought crusted my mind.

She’ll remember what I did.

My father would’ve had ample time to tell her what happened. To show her the false statement and guild lies into truths.

Everything he said would reek of dishonesty—but one fact remained.

One undisputed fact that would make her hate me for eternity.

What I did was unforgivable.

I was the one who pulled the trigger.

I was the one to slaughter the two people she cared for most in this world.

How can she ever forgive me once she knows?

About Pepper Winters
Pepper Winters is a New York Times and USA Todayinternational bestseller. She loves dark romance, star-crossed lovers, as well as the forbidden and taboo. She strives to write a story that makes readers crave what they shouldn’t, and delivers complex plots and unforgettable characters that keep readers talking long after the last page is turned.

On a personal note she loves to travel, has an addiction to creme brulee, and is married to an incredible Canadian who puts up with her endless work hours and accompanies her on signings. She’s also a firm believer that the impossible can become possible.
website
Facebook
Twitter
Pinterest