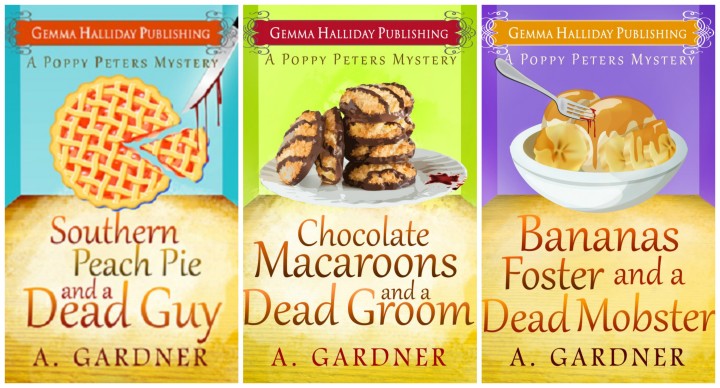 Book Summary:
After an injury derails Poppy Peters’ ballet career, she gathers the courage to follow in her grandmother’s footsteps and attend Calle Pastry Academy in a small-town in Georgia. Poppy has her work cut out for her not only fitting in with her charming (and not-so-charming ) Southern classmates but also proving her worth to her teachers after her first publicly humiliating attempt a making the school’s famous peach pie. But Poppy’s pastry problems go from bad to worse when she’s suddenly accused of stealing expensive black truffles, and her attempt to clear her name goes awry…resulting in her finding a dead body instead! If Poppy’s going to survive this culinary experience, she’ll need to find the missing truffles and track down a killer, all while honing her baking skills to compete in the school’s dessert competition for a coveted pastry internship in Paris. Can Poppy prove she’s one tough cookie? Or is her life about to crumble?

Book Summary:
When Poppy Peters takes an internship in Paris working for a top pastry chef, she realizes that bakery life isn’t all cupcakes and frosting. The sous pastry chef dislikes foreigners, her mentor only speaks French, and to top that all off she finds the groom of the wedding she’s catering dead in his own backyard. But Lord Dovington wasn’t just a handsome royal waiting to sweep his bride-to-be off of her feet. He was also a well-known playboy with a long line of vengeful exes.

Now, as one of the prime suspects, Poppy must prove she’s innocent . . . and that her recipe for chocolate macaroons isn’t to blame. But the clock is ticking, and with a missing diamond, a break-in, and a hot batch of reporters on her tail, Poppy has a lot of sifting to do. Will she find the killer before she too gets baked?

Book Summary:
Reluctant sleuth Poppy Peters is back in Georgia, and her last semester of pastry school is no icing on the cake when a body is discovered at the local farmer’s market, and the murder weapon has Poppy’s name on it. Not to mention, the victim belonged to a deadly southern crime family. Now, Poppy is being tailed by the mafia, and it doesn’t help that the school’s new pastry instructor has her working with her worst rival. But after a heart-stopping car chase, a frightening discovery at an old jam factory, and a spontaneous trip to New Orleans, Poppy discovers a secret that makes her past feats look like a piece of peach pie. Poppy’s chances of making it to graduation day are about to go up in flames just like her Bananas Foster.

Praise for the Book

“A sweet and satisfying mystery that will leave you hungry for more! A. Gardner’s Poppy Peters Mysteries have earned a place on my keeper shelf!”
~ Gemma Halliday, New York Times bestselling mystery author

“A. Gardner cooks up one fabulous mystery with this Southern suspense.”
~Pauline Michael, Night Owl Reviews

Excerpt
My first encounter with a southern guy isn’t going so well. So far I’ve admitted I have never tried sweet tea, and my big toe is a little too long for the shoes I am wearing. Nice one, Poppy. Now he is going to think I am a weird westerner with a foot fetish. I try hard not to look down at my black, high-heeled boots. Why am I the only one on campus wearing any black?
“My name is Cole,” the man says with a grin on his face. I reach out to shake his hand. My palms are sweating just like every other place on my body. I haven’t even turned thirty yet, and I’m already having hot flashes. It is going to take me some time to get used to this heat.
“Poppy Peters,” I reply. I wipe my forehead and underneath my eyes. I bite my lip when I see a bit of smeared mascara on the side of my finger. It is so humid my makeup is melting off. “Is it always this hot here?”
“Welcome to Georgia.” Cole chuckles and shrugs as we walk towards the student bakery. Cole is one of the first students I bumped into at the registration office. His lemon-colored T-shirt shines bright compared to his dark skin, and his impressive physique makes me look at him twice. His eyes are intriguing—an even mix of blue and green.
As we walk, I can’t help but admire how lush the vegetation is on campus. Every tree outstretches towards the sidewalks, providing a much needed break from the glaring sun. The patches of grass remind me of ocean waves, if the ocean sparkled like emeralds. Even the flowerbeds near the Administration building had bundles of purple and orange wildflowers that couldn’t be contained.
“What’s that smell?” I ask. “And don’t say it smells like fresh meat. I heard a teacher in the Registrar’s Office use that joke about a hundred times.”
“I’ll show you.”
I follow Cole across campus until the heavenly smell of baked bread and sugary doughnuts grows stronger. I long for that smell sometimes. It takes me back to my schoolgirl days when I spent my weekends in the kitchen with Grandma Liz. My Grandma Liz came to Calle Pastry Academy when she was in her early twenties. I imagine her tiny frame and long, dancer legs. It’s a miracle that she came to this school and still stayed so thin.

Author A. Gardner
A. Gardner is a native westerner exploring the sweet bites of the south. After years of working in the healthcare industry, she moved across the country with her husband and adventurous baby boy. She is a mystery and romance writer with a serious cupcake obsession and a love of storytelling that began at an early age. When she is not writing, she is either chasing after her son, out for a swim, trying out a new recipe, or painting her nails bright blue.

Enter to win an Amazon Gift Card or Paypal Cash

Open only to those who can legally enter, receive and use an Amazon.com Gift Code or Paypal Cash. Winning Entry will be verified prior to prize being awarded. No purchase necessary. You must be 18 or older to enter or have your parent enter for you. The winner will be chosen by rafflecopter and announced here as well as emailed and will have 48 hours to respond or a new winner will be chosen. This giveaway is in no way associated with Facebook, Twitter, Rafflecopter or any other entity unless otherwise specified. The number of eligible entries received determines the odds of winning. Giveaway was organized by Kathy from I Am A Reader and sponsored by readinglight.com. VOID WHERE PROHIBITED BY LAW.