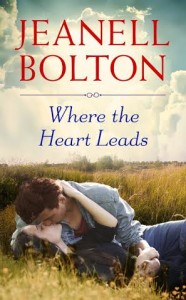 About WHERE THE HEART LEADS

A new beginning. It’s the only thing former child star Moira Farrar wants. Putting her painful Hollywood memories in the rearview mirror, she’s headed to Texas and to an exciting new job directing a small-town theater group. But it’s the sinfully sexy smile of red-headed rancher Rafe McAllister that makes Moira really dream of starting over-even though she knows that anything more than a fling would set the stage for heartbreak.

When Rafe buried his wife three years ago, he buried his heart along with her. Now, the only woman in his life is his daughter . . . and all ofthe women in Bosque Bend know that. But from the moment he lays eyes on Moira, he feels alive again. Maybe it’s her quick wit and clear-eyed compassion. Whatever it is, Rafe wants Moira, body and soul. So why is she so skittish? Rafe aims to find out-before his second chance at happiness rides off into the sunset . . .

Moira followed Sarge through the barn door.  No rain had fallen yet, but navy blue clouds had gathered at the edge of the sky and the air smelled of ozone.    She looked around the barn.  Rocky was nowhere in sight, but Astrid was leaning against Dakota’s stall, waiting for them.

She pushed off the stall and walked over to them.  “Rocky had to take care of her car so I rubbed down both horses and put them in their stalls.  Rafe, that Bella horse tried to bite me.  I’ve never had a horse do that before.”

Rafe shook his head.  “Bella’s vicious—bad to the bone.  I’m surprised you could handle

He swung off his horse and reached up for Delilah. As he lowered her to the ground, a

thunderclap shook the barn, and she buried her face against his leg.

Astrid stepped forward.   “Rafe, how about I run Delilah into the house right quick before the rain starts while you take care of Star?”

“Good idea.”  Rafe knelt down to his daughter’s level.  “Miss Astrid is going to get your to the house before the rain starts, sugar.  She’ll take care of you till the pretty lady and I come in.”

As Astrid and Delilah started up the road, Moira swung her leg over Star’s back, but before she could reach the ground, Rafe’s arms were at her waist and he was turning her to face him.

Her heart pounded, and she grasped his shoulders.  She wasn’t expecting this.  And she didn’t want it—or maybe she did.

He slid her slowly down his body, tight against his hardness, and she felt the heat rise in her cheeks.  Her breathing turned to a soft pant and the barn was suddenly much too warm.

Oh God, she did want it.

She felt faint.  She felt happy.  Her ears rang.  She could live in this moment forever.

His voice was a whisper in her ear.  “Have lunch with me tomorrow in town.”

Moira nodded, so full of wonder she could hardly speak.  One syllable was all she could get out, but it was enough.

The rain came in spits and spatters, first a polite pitter-pat, and the next minute, a windshield-blinding maelstrom, then back to the droplets again.  Moira gazed out the window of the car at the sodden landscape, but didn’t really see a thing.

Good thing Astrid had volunteered to drive.  She’d have run them off into a ditch.

What had Rafe McAllister done to her?   Her pulse was thumping and her nerves humming and she felt like she was floating on air.  God help her, that was exactly what it had been like when Colin kissed her the first time.

Astrid shot her a quick look.  “Okay—spill.  What happened with you and the cowboy?  You’ve been in another universe ever since I left you two alone in the barn.”

About Jeanell Bolton
Award-winning author Jeanell Bolton is an active member of the Austin chapter of Romance Writers of America. She has three children, one husband, and one dog. She lives on five glorious wooded acres in the boondocks of Georgetown, Texas. In past lives, she has been a teacher, an activist, an artist, a journalist, and a chorus director, but she is now settled into writing about deep, dark romances which end up happily ever after, which is how it always should be.
https://www.facebook.com/Jeanell.Bolton
http://jeanellbolton.com/