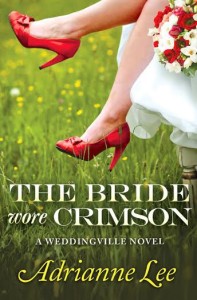 EVERY BRIDE WANTS A KILLER WEDDING
Weddingville, Washington, is in the throes of its annual bridal fair. For Daryl Anne Blessing, that means soothing the high-strung brides-to-be who have taken her family’s dress shop by storm. Hunky photographer Seth Quinlan is around to provide eye candy and witty repartee-but it’s no laughing matter when a diamond ring set disappears from the Ring Bearer Jewelers, followed by a designer gown from Blessing’s Bridal Shop.

Daryl Anne hopes the thefts are just the work of a prankster poking fun at the wedding fever that’s overtaken the town. But Weddingville’s shopkeepers can’t afford for the bridal fair to lose its luster. Then business takes a dark turn when a bride is found dead in Flower Girl Shop’s fridge. Now, with Weddingville’s romantic reputation on the line, Daryl Anne and Seth turn up the heat on their own simmering attraction-and a killer determined to make bridezillas a dying breed . . .

It always feels like I’m walking into a secret garden when I enter a floral shop. Green everywhere. Take another step and bursts of color catch the eye. But the first sensation is the ambrosia scent, a mix of different blooms that I can never quite define. Sweet. Pleasant.

This was the Flower Girl. The narrow entrance, like walking through a trellis, opened to a wide room that held racks and displays and an array of accessories for garden and home, just as Jenny had described. The mesh of voices, however, robbed the sense of a secret garden today.

Customers milled throughout the display racks, oohing and aahing at the variety of arrangements. Several were almost nose-touching the glass cooler case, peering in at myriad bouquets in a riot of hues that could suit any wedding theme.

As I worked my way toward the counter, I spied Flora working the cash register. Her daughter, Violet, and another person I didn’t recognize were in the work area behind her, putting together arrangements.

Flora looked up, spotting me in line. She was in her late forties with thick glasses, straight blond hair going gray, and a penchant for oversized jeans and men’s plaid shirts. She waved me forward, leaned across the counter, and said, “Daryl Anne, your mother’s roses are in the cooler in the storeroom. Just go on back and get them.”

“Sure.” I retreated along the line of buyers waiting to pay for treasures they’d found or to place an order for that something special that would add to their own perfect ceremony. At the end of the day, I thought, there are worse jobs than fulfilling someone’s dreams. I cut across the room to a doorway marked EMPLOYEES ONLY, humming “Here Comes the Bride.”

I entered a short hallway that opened into a ten-by-twenty-foot windowless room. I suppressed a shudder, telling myself it wasn’t some creepy basement, just a storeroom. But the sputtering fluorescent lighting overhead did not alleviate my unease. I hummed a little louder. My gaze darted to the shelves at one end of the room, stuffed with boxes, vases, planters, and big plastic buckets. Nothing there to cause the hair on my nape to stand on end. And yet it was.

My arms were even goose bumpy. Stop it, Daryl Anne. All the talk about locking doors and no one feeling safe in this town had me scaring up nightmares in the daytime. Nothing scary, except maybe a spider or two. My gaze went to the two refrigeration units at the other end of the room. The glass front of the larger cooler seemed frosted, but as I neared, I realized it was just steamed up, as if someone had let too much warm air into the interior by holding the door open too long.

I peered into the smaller cooler first. Baby’s breath, lilies, carnations, even lilacs, but no roses. I moved to the other cooler, grabbed the handle, and pulled the door open. Chilled air rushed out to greet me. I stared at the calamity inside, not comprehending what I was seeing. It looked as if someone had taken a baseball bat to the glass shelving, vases, and flowers, smashing everything. Shards of glass clattered to the concrete, onto my sandal-clad feet, cutting into my toes.

I didn’t feel it. Not then. My attention zeroed in on the mound of rose petals and broken stems on the bottom of the cooler. A fisted hand rose from the heap as if reaching toward me. I recoiled. I wanted to run. But what if this person was alive? Needing help. I leaned forward to touch the wrist and felt cold, rubbery flesh. Someone started screaming. It might’ve been me. 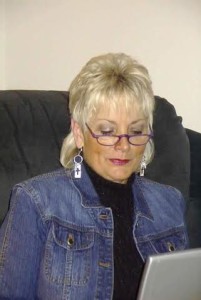 Adrianne Lee lives with her husband of many, many years on the beautiful Olympic Peninsula in Washington State in a pole barn building her husband transformed into an upstairs apartment with a shop below for his hot rods. Adrianne creates her stories on her laptop, in her recliner with her adopted cat, Spooky, curled between her calves, snoozing. 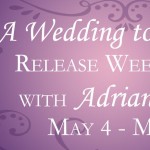 #Giveaway A WEDDING TO DIE FOR by ADRIENNE LEE @a 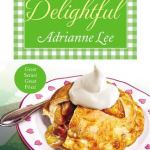