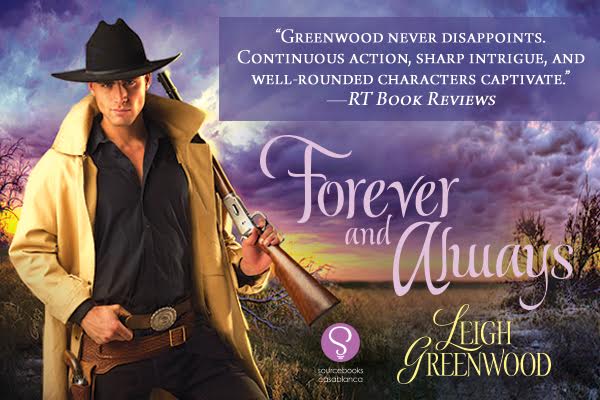 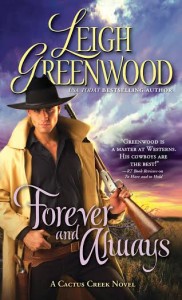 HE KNOWS SHE CAN NEVER BE HIS…

Logan Holstock, oldest of three brothers orphaned on the Santa Fe Trail, has always been content knowing his brothers were alive and happy somewhere in the vast and brutal West—until he learns he may be dying. Certain he has little time left, Logan sets out to find them and end his days near a family he’s never known…and stumbles across a strong yet vulnerable widow who makes him yearn for what can never be his.

Logan knows he shouldn’t love Sibyl Spencer—he couldn’t bear leaving her a widow all over again. But as he finds himself drawn deeper into the lives of this small Western town, he can’t escape the longing to find peace in her arms. When he discovers that his death sentence is anything but, Logan swears he will do whatever it takes to prove himself to the woman he loves…and show he believes their love is worth fighting for.

Leigh Greenwood is the USA Today bestselling author of the popular Seven Brides, Cowboys, and Night Riders series. The proud father of three grown children, Leigh resides in Charlotte, North Carolina. He never intended to be a writer, but he found it hard to ignore the people in his head, and the only way to get them out was to write. Visit him at www.leigh-greenwood.com.

This November marks the release of Forever and Always, the final book in Leigh Greenwood’s Cactus Creek Cowboys trilogy. To celebrate, we’re sharing an excerpt from the book!

“What are you doing here?” he asked.

“I was hoping to catch you before you left.”

“To tell you not to come in to work tomorrow. The swelling seems to have gone down a little, but you aren’t looking very strong.”

Something inside him gave way. It was a moment before he realized it was his resolve to keep his distance from this woman who obviously cared for him a great deal. He was sure she believed the swelling had gone down because she wanted it so badly. Knowing that removed the final barrier, and he reached out to take Sibyl’s hands. It was almost too much for his self-control when he received an answering squeeze.

“How could I have been so lucky to find someone to care as much as you and Kitty?”

“We wouldn’t care so much if you weren’t so wonderful.”

The sincerity in her voice was his undoing. Any shred of restraint vanished. Before he knew what he was doing, his arms were around Sibyl, and he was kissing her with an ardor all the more intense for having been denied so long. When he realized she was responding just as eagerly, it was nearly too much. Still, he fought to keep control. It almost wouldn’t matter if he dropped dead afterward. He would have had this one moment of indescribable happiness.

Finally, Sibyl broke the kiss. “You’ve got to take better care of yourself. You may not care what happens to you, but I care very much. Now before I say something I can’t retract, I’m going back inside.” She kissed him again—quickly this time—then turned and almost ran back around the corner of the house.

Logan was unable to move for several moments. His life had taken a turn so abrupt that it had thrown him off balance. Did Sibyl love him as much as he loved her? It seemed impossible that could be true. Still, she had responded to his kiss and kissed him again. Surely she wouldn’t have done that out of mere sympathy. The euphoria started to wear off, leaving him feeling week and shaken. Needing to sit for a few minutes, he walked over to the steps and sank down. Trusty approached and whined softly.

“I’m not going to fade out on you yet,” he told the dog. “In fact, once I get my strength back, I’m going to do everything I can to live. I might even see that doctor. I never knew holding a woman in my arms could make me feel like I’ve been half asleep for my whole life.” 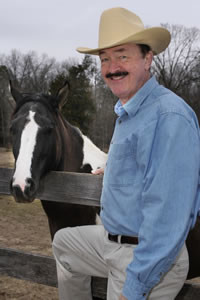 Best selling author of the popular Seven Brides, Cowboys, and Night Riders series. The proud father of three grown children, Leigh resides in Charlotte, North Carolina. He never intended to be a writer, but he found it hard to ignore the people in his head, and the only way to get them out was to write. Visit him at www.leigh-greenwood.com. 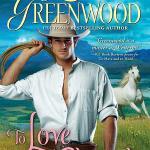 Giveaway Interview TO LOVE AND CHERISH BY LEIGH GR