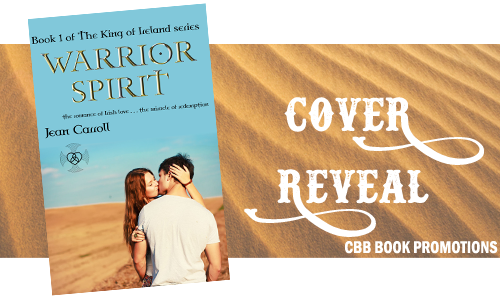 Today we’re excited to share the cover reveal for the revitalized cover of Warrior Spirit, Book 1 of The King of Ireland series by Jean Carroll. The book is also available free for Kindle 10/14-10/18, so grab it quick! 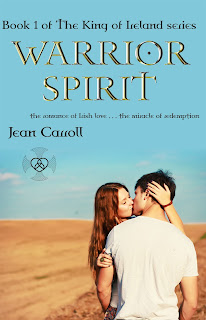 Irishman Blackie O’Brien led a sinful and self-destructive life of women, alcohol and drugs. He was the best, winningest, champion steeplechase jockey in the history of the sport until a near-fatal racing accident ended his career.

But this was no “accident”- his ruthless ex-agent, Mickey Reegan orchestrated the whole thing. It seems that the luck o’ the Irish has deserted Blackie once and for all.And Blackie is no ordi­nary Irish­man. This lusty young man is the direct descen­dent of Brian Boru, the most influ­en­tial High king of Ire­land. If Ire­land still had a king, Blackie would be it.Now, Blackie is a man with­out a career and with­out a kingdom.

War­rior Spirit chron­i­cles Blackie’s jour­ney from the green val­leys of Ire­land to the priv­i­leged horse coun­try of Mid­dle­burg, Vir­ginia. As Blackie begins to despair over his future, in enters beau­ti­ful, young Meg, who brings her horses to Blackie’s fam­ily farm where he’s been recu­per­at­ing from the accident.

Their sex­ual chem­istry is immediate.But Blackie’s fam­ily has other plans for him. They believe he’s dri­ven by the spirit of an ancient Irish war­rior and demand he find a place in Ireland’s polit­i­cal leadership.

From fight­ing off alco­holic temp­ta­tions, thwart­ing an attempted rape of Meg, and stop­ping thugs try­ing to take his life, Blackie leaps over one hur­dle after another. Will Blackie ulti­mately find the future he’s meant to have with the love of a good woman?

I started writ­ing The King of Ire­land series in 2008 when I had my sec­ond knee replaced. I was immo­bi­lized with ice on my knee for hours dur­ing the day and was, of course, bored to tears. The’King’ story was some­thing I had played with in my head for maybe twenty-five years. Watch­ing one more TV show, I decided to write it down. I wrote long-hand and quickly filled many yel­low legal pads and kept on going. Luck­ily my sister-in-law was a very good typ­ist, so I enlisted her help.

I made a lot of mis­takes at first and along the way learned a great deal about the craft of writ­ing and I’m still learn­ing. I got a moun­tain of advice and help from agents, edi­tors, con­test judges, cri­tique groups and friends. I found quickly that their was some­thing called “word count” and it was frowned upon to have too much of it. So I had to pare my 300K word novel down to where some­body might look at it. Hence I now have a three book, one novella series and might add more if my read­ers get invested in my characters.

I love my char­ac­ters by the way and feel very close to them. I got highly insulted when a friend said Blackie just wasn’t her cup of tea! I have a pas­sion for horses just like my char­ac­ters and have since I was a lit­tle girl and saw my first horse. Our prop­erty backed up to the Gar­ri­son For­est School for Girls in Mary­land and they rode their horses through our woods.

I started rid­ing when I was about eight years old and rode con­sis­tently until in my thir­ties and was lucky enough to have my own horse and pony for ten years. I did a lot of show­ing and did mostly jump­ing. Later I dis­cov­ered dres­sage and became fas­ci­nated with it just like the main char­ac­ters in my book. I retired in 2010 and briefly before that I started rid­ing again and it was glo­ri­ous to be on a horse once more. I’m retired from Johns Hop­kins Uni­ver­sity where I worked for 27 years as an Elec­tron Micro­scopist. The best thing is now I get to write full time and feel very blessed to be able to do so.

Excerpt: THE KISSTHE KISSThey got the horses ready, and led them out of the barn. She was get­ting ready to mount Cloudy when Blackie walked up behind her, leaned into her and whis­pered with his mouth against her ear,

Her heart flipped and she knew she was blush­ing from the huge rush she got. Meg wanted to just turn around in his arms and kiss him but she stuck her leg out and he flipped her into the saddle

He took off at a trot and she fol­lowed. They rode along the edge of a field next to the woods. Meg loved watch­ing him ride he was so good.

Turn­ing into the woods, Blackie slowed to a walk. The peace of the woods sur­rounded them like a bower; the breeze gen­tly wav­ing the branches; the birds singing their love songs.

He reined Sand­man back to ride next to her. Quiet for a few min­utes, he stopped, Meg halted Cloudy and Blackie stared at her. He moved Sand­man over close, leaned in and kissed her gen­tly on the mouth.

His lips were soft as he brushed them like a whis­per over hers. The jolt and rush she got wasn’t exactly soft. She instantly wanted more but he had already kicked Sandy into a dead run.

Christ, what am I doing?

He jerked the horse away and put him into a gal­lop to cover up his sur­prise and embar­rass­ment. Embar­rassed! He’d never felt that way before, kiss­ing a woman, even when he was a kid. The instant arousal caught him off guard, another rea­son to get out of there before she noticed. He knew her mouth would be that sweet. As he gal­loped off, he licked his lips to savor the taste of her.

She was star­tled. He’d caught her off guard. It took her a beat to react and then she took off after him.

Oh my God. He just kissed me.

She’d been won­der­ing what it would be like to kiss him, but hadn’t expected it to be that gen­tle or potent. The kiss had plucked her like a harp string all the way to her toes.