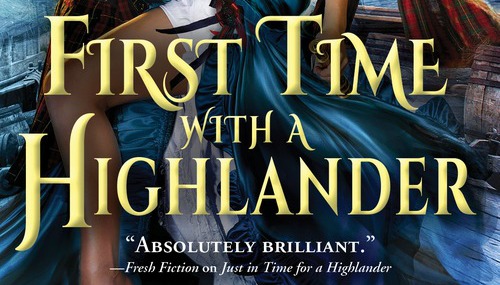 When I write a romance, I like to have one or two quiet scenes where the hero and heroine have a chance to get to know one another. My books tend to have some adventure happening, so many of the chapters have an accelerated pace. In First Time with a Highlander, this is one of those scenes. Serafina, the eighteenth-century down-on-her-luck owner of a small shipping concern who is my heroine, and Gerard, the twenty-first century ad man playboy who is my hero, have just outrun some bad guys. Serafina has escaped to the open spire of St. Giles, the most beautiful church in Edinburgh and the church that served as her place of worship when she was growing up. Gerard ascends the spire stairs to find her and discovers gorgeous views in every direction—the sea, the fields of green and, of course, Edinburgh Castle. We are in Serafina’s point-of-view here, and she really wants him to like what he sees because Edinburgh is so much a part of her. 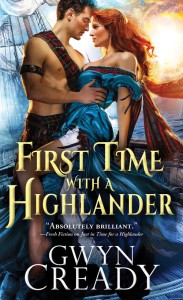 From the “master of time travel romance”, award-winning author Gwyn Cready continues her steamy Sirens of the Scottish Borderlands series.

She needs a man—but only for a night

What do you get when you imbibe centuries-old whiskey—besides a hangover the size of the Highlands? If you’re twenty-first century ad exec Gerard Innes, you get swept back to 18th-century Edinburgh and into the bed of a gorgeous, fiery redhead. Gerard has only a foggy idea what he and the lady have been up to…but what he does remember draws him into the most dangerous and exhilarating campaign of his life.

Be careful what you wish for…

Serafina Seonag Fallon’s scoundrel of a fiancé has left her with nothing, and she’s determined to turn the tables. If she can come up with a ringer, she can claim the cargo he stole from her. But the dashing man she summons from the future demands more than a night, and Serafina finds it easier to command the seas under her feet than the crashing waves he unleashes in her heart.

“Well, I locked the door when I came in. There’s no point in inviting unhappiness, right? I must say, it was certainly a challenge to find you—” He stopped mid-sentence when he noticed the view. “My God.”

“Do you like it?” Foolishly, she felt the view to be a gift she was giving him, and she wanted very much for him to like it.

“I live in a city,” he said, clearly struck, “in a very tall building. Higher than this even. And I have a beau­tiful view—of fifty other buildings equally as high—”

“No! It’s not possible.” The thought made her dizzy.

“Oh, it is. The building I was in when you sum­moned me is as high as this and has a pool in it.”

“’Tis something out of a story.”

He chuckled. “I suppose it is. But the people in my time don’t even think about how lucky we are. The woman I was with said—” He stopped and cleared his throat. “Not important. But this…” He gestured to the castle and the verdant hills beyond. “This is… I mean, it’s just…”

He looked at the soaring structure over their heads, a steeple atop a dome of iron ribs twenty feet high, beyond which a vista of nearly several hundred square miles was visible.

“This is your church, then? Where your family attended services, I mean?”

“When we were on land, aye. My father captained ships before he was a merchant. Most of the time, we sat for services on the deck of the ship, with the terns and kittiwakes looking on.”

He turned a quarter turn to the west and grinned. “The castle.”

He turned a quarter turn again, and she waited, hoping, hoping…

A small, thrilled sound rose in his throat. “Wow.”

“’Tis the Firth of Forth,” she said, the flush of pleasure running deep. “It empties into the North Sea—sometimes called the German Sea, though not by Scots, of course. We believe the sea to be ours. The Celts called it Morimaru—the dead sea.”

“Because of dangerous navigation?”

“Och, no. ’Tis not dangerous, not when you’ve done it enough. ’Tis a beautiful stretch of sailing water, though she demands attention and respect.”

“As any good woman does.”

“Any good Scotswoman,” she said, laughing. “But she can hide her currents under patches of water that are still—what a sailor calls ‘dead.’”

“The parallel to a good woman continues.”

Serafina grinned. “She brought us the Saxons and the Vikings, who gave us our warriors and the will to fight. Then she brought us textiles from France and grain from Germany and timber from Scandinavia, so that towns like Edinburgh and Glasgow could rise like oases in the beautiful hills. And now Scots fill their bellies and their pockets with the riches from her waters. Is she not the most giving of mothers, the most glorious of gods?”

“You should write copy.”

“Would anyone care for a woman’s thoughts?”

“Good copy has no gender.”

He took a step backward, and she caught his arm. “Careful.” She pointed to the hole in the floor.

He peered into the nave. “I knew falling was going to be a risk around you, but I wasn’t thinking this.” 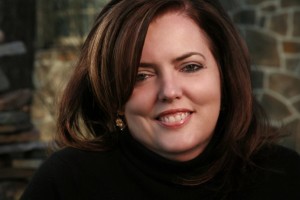 Gwyn Cready is a writer of contemporary, Scottish, and time travel romance. She’s been called “the master of time travel romance” and is the winner of the RITA Award, the most prestigious award given in romance writing. She has been profiled in Real Simple and USA Today, among others. Before becoming a novelist, she spent 25 years in brand management. She has two grown children and lives with her husband on a hill overlooking the magical kingdom of Pittsburgh.

Giveaway Ends 10.27.15 and open to all who can legally enter.
US only -Sorry no PO Boxes
You must be over 13 or have your parents permission to enter.
An email will be sent and you have 48 hours to reply or a new winner will be chosen.
Winner will be announced within 48 hours at the end of the giveaway. Giveaway is organized by Bookhounds and sponsored by the publisher
It has no affiliation with Facebook, Twitter or any other entitiy.
Void where prohibited.