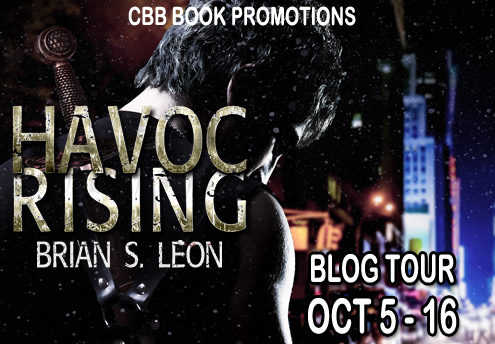 Welcome to my tour stop for Havoc Rising by Brian S. Leon!  Havoc Rising is an adult urban fantasy and the review tour runs October 5th-16th. Check out the tour page for the full schedule.

Steve—Diomedes Tydides to his Trojan War buddies—just had a bad day on his charter fishing boat in San Diego, but when the goddess Athena calls on her faithful warrior for another secret mission, he’s ready. The bomb that exploded inside the Metropolitan Museum of Art isn’t the crime American authorities think it is. Someone also stole the Cup of Jamshid, and Diomedes knows its fortune-telling abilities won’t be used for anything benign.

Though Diomedes recovers the Cup from a determined shaman holed up beneath Central Park, when he finds his allies slain and the Cup taken once more, he knows he’s up against a truly powerful enemy. Over a millennium has passed since Diomedes last contended with Medea of Colchis, deranged wife of Jason the Argonaut, but neither her madness nor her devotion to Hecate, goddess of witchcraft, has waned, and she intends to use the Cup of Jamshid to release across the world a dark brand of chaos unseen in human history.

Immortal since the Trojan War, Diomedes must once again fight for mortals he understands less and less, against a divine evil he may never truly defeat.

Brian S. Leon is truly a jack of all trades and a master of none. He writes just to do something with all the useless degrees and skills he’s accumulated over the years. Most of them have no practical application in civilized society, anyway. His interests include mythology and fishing, in pursuit of which he has explored jungles and museums, oceans and seas all over the world.His credentials include an undergraduate degree from the University of Miami and a master’s degree from San Diego State University, plus extensive postgraduate work in evolutionary biology at the University of Massachusetts Amherst, where he studied animals most people aren’t even aware exist and theories no one really cares about anyway.

Over his varied career, Brian’s articles have been published in academic journals and popular magazines that most normal people would never read. They can be found in The American Society of Primatologists, the American Journal of Physical Anthropology, Proceedings of the American Association of Zoos and Aquariums and the like.

His more mainstream work came as an editor for Marlin and FlyFishing in Salt Waters magazines, where he published articles about fishing and fishing techniques around the world. He won a Charlie Award in 2004 from the Florida Magazine Association for Best Editorial, and several of his photographs have appeared on a number of magazine covers—almost an achievement of note, if they weren’t all fishing magazines.

Always a picky reader, Mr. Leon enjoys stories by classical masters like Homer and Jules Verne as well as modern writers like J.R.R. Tolkien, David Morrell and Jim Butcher. These books, in combination with an inordinate amount of free time, inspired him to come up with tales of his own.

PLEASE WELCOME BRIAN TO BOOKHOUNDS YA

Who is this Diomedes Guy?

First off, the main character in Havoc Rising is not someone I just made up. I actually borrowed him from history, or, more accurately, Homer (No–not the guy on the Simpsons). For some, the character of Diomedes will be familiar, but for most—even most who read the Iliad—he’s a virtual unknown among Greek heroes and other legendary figures even though some believe that books V and VI of the Iliad were originally separate books meant to describe Diomedes’ tremendous feats. Why he’ still so obscure, I have no clue. Everybody remembers Achilles, probably because Brad Pitt played him in the movie Troy, and in which Diomedes wasn’t even mentioned. It’s a shame because it is mentioned quite often in the Iliad that Diomedes was one of the most feared warriors the Greeks had. In fact, the Trojans were scared to death of him, far more so than Achilles. And unlike the brash and egotistical Achilles, was level-headed, honorable and wise. He is also the only mortal ever in all of the myths and legends the Greeks passed along to wound, not one, but two gods. And one of them was Ares himself. He even bested Ajax the Greater (not the little one) in hand-to-hand combat during funerary games and he never lost a fight, nor did he ever give up, no matter how badly he was wounded. On many occasions he went into battle while the Greeks fled. He was the first to volunteer for the Trojan Horse mission and he had to cajole and convince Odysseus to accompany him to infiltrate Troy to steal the Palladium so that the city would fall. In short, he was a high speed, low drag bad ass and possibly the first commando.

Kicking ass was in his genes. In typical Greek fashion Diomedes was mostly known as Tydides, which means “Son of Tydeus.” His father Tydeus was considered one of the greatest warriors of his generation and was one of the Seven Against Thebes, which was one of the greatest battles prior to the Trojan War. He was such a great warrior that Athena, Goddess of Wisdom and Thoughtful Warfare (i.e. tactics—versus Ares’ battlefield chaos and bloodshed), offered him immortality. However, during the battle, Tydeus was mortally wounded and for some reason went a little crazy and was discovered eating the brains of a fallen adversary. Athena, predictably, was horrified and rescinded the offer of immortality and left him to die on the battlefield. Diomedes was maybe 4 when this happened. At the funeral he and the other six sons of the heroes of this battle swore an oath of vengeance, calling themselves the Epigoni. Ten year later these seven boys led an army and did what their fathers could not—restore the rightful king to the throne in Thebes in the greatest war before Troy. Nothing is left to describe that war, however, it is said that while Diomedes was maybe only 14 at the time, he was already considered the most feared warrior of the war.

His mother Deipyle was the daughter of Adrastus, the king of Argos before Diomedes. Yep, he was a king (more like a warlord or chieftain actually) and one of the suitors of Helen—the face that launched a 1000 ships. As a suitor he was bound by the Oath of Tynadareus, which obligated him to protect Helen’s husband from any wrongdoing that stemmed from his marriage to her, regardless of how big a prick he was. Don’t ask, I don’t get it either. That’s how he got dragged into the whole war.

Never a piker, he showed up with his A-game. He brought 80 ships with him, with only that blowhard Agamemnon and Nestor bringing more. He was more than just a soldier, though, he was a tactician and a trusted advisor who never went into battle ill-prepared or without a plan. In the Trojan War the list of people Diomedes kills is impressive, as is his level-headed advice to Agamemnon and the others. He was widely feared, respected and his honor was unquestionable and, like his father before him, it earned him the favor of Athena. In fact, according to legend, Diomedes is the ONLY mortal that Athena ever showed her true form to and she favored him above all others, including Odysseus. And yes, she granted him powers and abilities to identify and face Aphrodite and then Ares in combat, and then bested them both. By the end of the war, it is said that Athena offers him the same deal she offered his father–immortality.

After the war, Diomedes attempts to return to his homeland but a seriously pissed off Aphrodite, still holding a grudge, stifles his attempts and turns his wife against him. He never again sets foot on his home land and ends up heading west toward Italy. There is no record of his death, most say because he took Athena’s offer.

Et Viola, my hero, the main character of Havoc Rising, is born