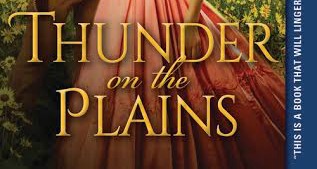 Thunder on the Plains Excerpt

Sunny held her chin higher and faced him. “I’ll race you,” she told him.

She gave him a daring look, a new boldness in her eyes. “I said I’ll race you. If you catch me and manage to pull me off my horse, you’ve won!” She charged away, and Colt sat there a minute, wondering what she was up to. What was this sudden change in conversation? She was like a crazy woman today, and she had turned his feelings a thousand different ways.

Colt watched her, the way her bottom fit her saddle, the way her hair blew in the wind. Her daring look stirred his pride, and the race was on. He kicked Dancer into a hard run, manly desires stirring in him at the challenge of catching her. He held the reins with one hand and smashed out his cigarette against his saddle horn with the other, tossing the stub aside and leaning into the ride. “Get up there, Dancer,” he shouted to the horse.

Dancer’s mane flew up into Colt’s face as he galloped up and down more sandhills. He noticed Sunny veer to the west rather than north, and he turned Dancer, taking a cut between two more sandhills and emerging near Sunny as she came around the end of one hill. She screamed and laughed when she saw him, and now he knew he could catch her.

He came closer, the determination to reach her now a burning need. It went against all reason, was totally foreign to all sense of maturity. They were like children for the moment, and yet not children at all. The emotions it stirred in him to think of catching her were dangerous, yet he could not stop himself. He came ever closer, and now he was on her!

Sunny screamed when she felt his strong arm come around her. Suddenly, she was free of her horse and sitting sideways on Dancer, a powerful arm holding her. She covered her face and laughed as Colt slowed his horse. “Now you are my captive,” he teased.

She threw her head back and faced him, and both of them sobered. For a moment they sat there breathing heavily from the ride, watching each other.

“We had better go catch your horse,” he finally told her.

“We’ll find it later,” she answered. She moved her hands to touch his powerful arms, ran her fingers over his bare shoulders. “Tell me, Colt. What does an Indian do with his captive?”

For a moment everything went silent for him. Nothing existed but the utterly beautiful woman in his arms, her tempting mouth, her open blouse, her blue eyes, her golden hair. He moved a hand to rest against the flat of her belly. “He takes her to his tipi and makes her his slave,” he answered, his voice gruff with passion.

She touched his face. “That’s what I want you to do with me, Colt. Make me your slave—today, tonight, tomorrow.”

He shook his head. “Sunny—”

She touched his lips. “Don’t say it, Colt.” Her eyes glistened with tears. “I don’t know what’s right and wrong anymore, and today I don’t care. I just want you. I’ve always wanted you.” A tear slipped down her cheek. “It can’t be anybody else, Colt, not the first time. I—”

His kiss cut off her words, a deep, hot kiss that removed any remaining inhibitions. She could barely get her breath for the thrill of it, the ecstasy of his hand moving to her breast, the ache of womanly desires that surged in her when his tongue moved between her lips. Dancer moved slightly, and she clung to Colt. He left her lips for a moment, keeping one arm around her as he slid off the horse and pulled her afterhim. 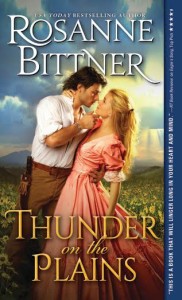 IN A LAND OF OPPORTUNITY

Sunny Landers wants a big life—as big and free as the untamed land that stretches before her. Land she will help her father conquer to achieve his dream of a transcontinental railroad. She won’t let a cold, creaky wagon, murderous bandits or stampeding buffalo stand in her way. She wants it all—including Colt Travis.

ALL THE ODDS WERE AGAINST THEM

Like the land of his birth, half–Cherokee Colt Travis is wild, hard, and dangerous. He is a drifter, a wilderness scout with no land and no prospects hired by the Landers family to guide their wagon train. He knows Sunny is out of his league and her father would never approve, but beneath the endless starlit sky, anything seems possible… 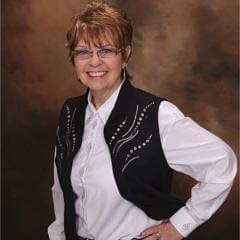 USA Today bestseller and award-winning novelist Rosanne Bittner is known as the “Queen of Western Historical Romance” for her thrilling love stories and historical authenticity. Her epic romances span the West—and are often based on Rosanne’s personal visits to each setting. She lives in Coloma, Michigan, with her husband and two sons.