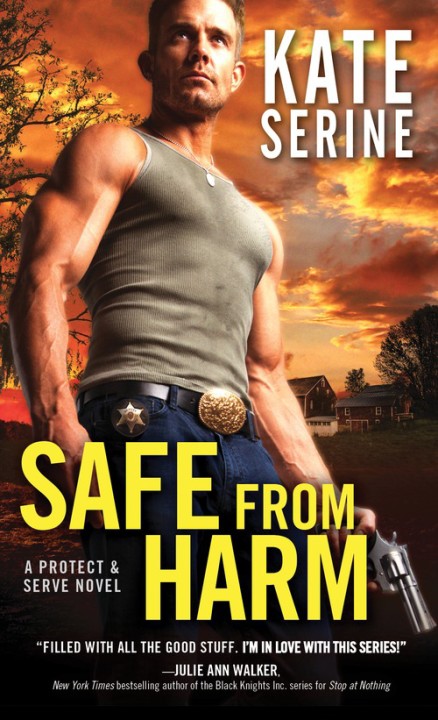 There’s something about prosecuting attorney Elle McCoy that Deputy Gabe Dawson just can’t get enough of. Even with Gabe’s family legacy in law enforcement and promising career, Elle’s smart, sassy rejection of all his charm makes Gabe want her even more.

But Gabe’s confidence is shaken when he’s shot on the steps of the courthouse, protecting Elle from a terrorist intent on revenge. Worse, Elle isn’t out of danger yet. But as they race to counter the terrorist’s next move, Gabe determines to prove to Elle—and himself—that he’s a man worthy of her.

Kate SeRine (pronounced “serene”) is a hopeless romantic who firmly believes in true love that lasts forever. So it’s no surprise that when she began writing her own stories, Kate vowed her characters would always have a happily ever after. She writes paranormal romance and romantic suspense and is the author of the award-winning TRANSPLANTED TALES series and will be releasing the PROTECT AND SERVE series with Sourcebooks in November 2015 and the DARK ALLIANCE series with Kensington in July 2016.

Kate is a member of Romance Writers of America and of Indiana RWA and has been a finalist in the Fire and Ice Contest (2010), the Finally a Bride Contest (2010), and the Gayle Wilson Award of Excellence (2013), and is the recipient of The Emily (2012) and the National Readers Choice Award (2012). She is represented by Nicole Resciniti with the Seymour Agency.

Kate lives in a smallish, quintessentially Midwestern town with her husband and two sons, who share her love of storytelling. She never tires of creating new worlds to share and is even now working on her next project–probably while consuming way too much coffee.