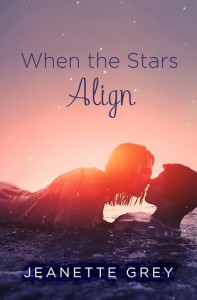 WHEN THE STARS ALIGN by Jeanette Grey (September 1, 2015; Forever Yours E-Book)

Their passion burned hotter than the stars . . .
For Josephine “Jo” Kramer, nothing has ever been easy. When she earns a summer internship in Puerto Rico, working at one of the world’s preeminent scientific facilities, she’ll let nothing distract her. Not her own insecurities, not the arrogant scientists, and definitely not her tall, chiseled research partner, Adam.

For Adam McCay, physics is simple—it’s women who are complicated. Especially brilliant, beautiful ones like Jo. From the moment they meet, he can feel the heat smoldering deep beneath her icy exterior. And Adam knows just what it will take to make Jo melt . . .
Under the endless stars of a tropical sky, Jo and Adam indulge their every desire. But as their internship comes to an end, their perfect island paradise is threatened. Was their time together a summer fling? Or is their passion hot enough to last the long winter nights?

When The Stars Align Excerpt

The instant he had them in his room, he slammed her up against the door, shifting a hand away from her ass to flick on the light. She blinked hard at the shock of brightness.

The sudden vision of this man, all flushed skin and sinful lips, blond hair and eyes that she suddenly couldn’t read.

He tore her binder from her and tossed it on the floor. His forearm slapped against the door beside her head, and she startled. There was a growl to his voice as he said, “You are so…fucking…”

And she couldn’t help it. Her mind supplied all the words that should go with that. Bitchy, difficult, stubborn, such a pain in my…

Just like that, it wasn’t any mystery at all to read his gaze. Their eyes had had time to adjust to the light, but his pupils were still huge, his nostrils flaring, and there wasn’t any mistaking the way he pinned her with his hips. That insistent hardness there, pressing exactly where she wanted it to be.

But it wasn’t just sex, the way he was looking at her. Sex would have been easy. He had to go ahead and make it tender, too.

“So gorgeous,” he said, his tone warm, fingers gentle as he ran them through the blue and black strands that had fallen into her eyes. “Your hair.” His hand drifted down, the broad pad of his thumb sliding across her bottom lip. “Your mouth.” He leaned in to kiss her. His teeth tugged at her piercing, and it sent lightning coursing all the way to her clit. “And this.” Stroking the tendrils of ink that crept above the neckline of her shirt, he kissed her deeper. “Teasing me all this time.”

Maybe it was a fetish. Maybe this clean-cut, all-American guy had a thing for a girl with a little bite.

The reverence in his touch brushed against something she kept locked too deeply away, and she squirmed against the way it threatened to break free. She hitched herself up higher against his hips and looked him straight in the eye. Made her tone drip sex when that was only the beginning of it.

“Maybe it’s about time it finally stopped teasing you, then, huh?”

By day, he’ll show her a side of Paris not found in any guidebook. By night, he’ll introduce her to a passion beyond her wildest dreams. In this sensuous story of indulgence and desire, Jeanette Grey delivers one of the most romantic reads of the year and proves why she is fast becoming a must-read star.

SEVEN NIGHTS TO SURRENDER
Kate arrives in Paris hoping to find inspiration. Instead she finds Rylan. In a swirl of stolen kisses and hot, tangled sheets, Kate is quickly swept away by the sexy stranger, longing to surrender to his expert touch. With Rylan, nothing is forbidden—except the truth.
An American ex-pat worth millions, Rylan never flaunts his fortune. Rather, he guards his identity from everyone, especially women. No strings, no commitments, no complications. But the second his lips taste Kate’s soft, sweet skin, everything changes. For the first time, Rylan has found someone to share his every want and need. Yet he knows that secrets stand between them. To keep her, he’ll need to confess thetruth before it’s too late . . . even if doing so could mean losing Kate forever. 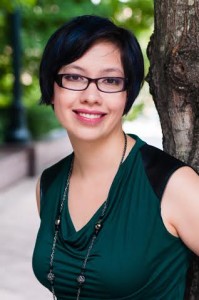 Jeanette Grey started out with degrees in physics and painting, which she dutifully applied to stunted careers in teaching, technical support, and advertising. When she isn’t writing, Jeanette enjoys making pottery, playing board games, and spending time with her husband and her pet frog. She lives, loves, and writes in upstate New York.