Recipe for the Perfect Highland Hero

Hello all!  I love me a great Highlander hero. I can’t get enough of reading about the romance of the Highlands, and those burly Highlanders falling in love. But what makes for the perfect historic Highland hero? Never fear, I have devised a recipe for the perfect Highlander!

In The Highlander’s Bride, I met Highland warrior, Sir Gavin Patrick, who I like to think embodies all these characteristics. It is 1359 in medieval France and all Gavin wants is to get back to his native Scotland. But before he can leave the battlefields of France, he is tricked into becoming honor bound to escort Lady Marie Colette to her fiancé in Scotland. Under no circumstances is he to lay hands on the beautiful, clever-tongued heiress…no matter how desperate the temptation.  Forced to pose as a married couple to make their escape, Gavin and Colette find themselves thrown into peril…and each other’s arms. As the danger mounts, so does their forbidden passion. When Colette is taken from him Gavin must choose—will he jeopardize his honor, defy his promise, and fight to win her back?

If you were creating a recipe for the perfect Highlander, what “ingredients” would you add? 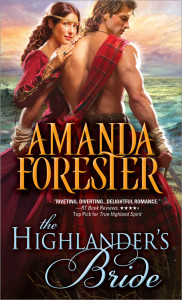 Their attraction is forbidden

All Highland warrior Gavin Patrick wants is to get back to his native Scotland. But before he can leave the battlefield, he’s given a final mission—escort Lady Marie Colette to her fiancé. Under no circumstances is he to lay hands on the beautiful, clever-tongued heiress…no matter how desperate the temptation.

Forced to pose as a married couple to make their escape from France, Gavin and Marie Colette find themselves thrown into peril…and each other’s arms. As the danger mounts, so does their forbidden passion. But it isn’t until Marie Colette is taken from him that Gavin is forced to decide—is he willing to lose the woman who stole his heart, or will he jeopardize his honor, defy his promise, and steal her in return?

Amanda Forester holds a PhD in psychology and worked many years in academia before discovering that writing historical romance was way more fun. A Publishers Weekly Top Ten author, her books have been given starred reviews from Booklist, Publishers Weekly, and a Top Pick from RT Book Reviews. Whether in the rugged Highlands of medieval Scotland or the decadent ballrooms of Regency England, her novels offer fast-paced adventures filled with wit, intrigue, and romance. You can visit her at www.amandaforester.com.

Giveaway Ends 9.27.15 and open to all who can legally enter.
US only -Sorry no PO Boxes
You must be over 13 or have your parents permission to enter.
An email will be sent and you have 48 hours to reply or a new winner will be chosen.
Winner will be announced within 48 hours at the end of the giveaway. Giveaway is organized by Bookhounds and sponsored by the publisher
It has no affiliation with Facebook, Twitter or any other entitiy.
Void where prohibited. 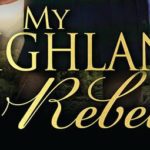