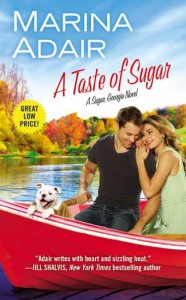 A Taste of Sugar

Marina Adair is a lifelong fan of romance novels. Along with the Sugar series, she is also the author of the St. Helena Vineyard series and the upcoming Shelter Cove series. She currently lives in a hundred-year-old log cabin, nestled in the majestic redwoods of the Santa Cruz Mountains, with her husband and daughter. As a writer, Marina is devoted to giving her readers contemporary romance where the towns are small, the personalities large, and the romance explosive. She also loves to interact with readers and you can catch her on Twitter at @MarinaEAdair or visit her at www.MarinaAdair.com.

A blast from her past…

Charlotte Holden, Sugar’s favorite pediatrician, knows better than anyone that love only leads to heartbreak. Instead, she’s focused on creating the Grow Clinic, an outpatient center for children. All she has to do now is to host the best Founder’s Day Parade in the history ofSugar, Georgia, to win over a big-city donor. Easy as peach pie. Then sexy Jace McGraw blows back into town and utters those three words every woman dreads: we’re still married.

Jace McGraw was making an offer on his dream business in Atlanta when he was told that his wife had some credit issues. Wait, his wife? The annulment went through years ago—or so he thought.  He’d walked away only to keep his troublemaker reputation from ruining her dreams. But now that they have a second chance, Jace offers Charlotte a deal: he’ll grant a discreet divorce in exchange for 30 days and nights ofmarriage. Because this time he isn’t going to let her go without a fight.

“Morning, Dr. Holden,” he said, unfolding himself from the car.

“You’re late.” Charlotte stood and swished her way down the steps toward him. No good morning, no thanks for coming, just a you’re late as though they had plans, as though he’d disappointed her again.

“Sorry,” he said coolly, tapping the face of his watch. “Forgot to set it to Charlotte Standard Time.”

She stopped a few feet from him, and he could see the hesitation in her expression. Hesitation and something else. Something that looked an awful lot like vulnerability. Oh, there was a good portion of irritation and hostility glaring at him through those baby blues, but behind it all was definitely vulnerability. Interesting.

“You’re the one who said we had to go to Atlanta today.”

“I believe you told me you were too busy to make the time,” he said, not sure how he was going to handle six hours in an enclosed space with her. Just standing downwind taking in her floral scent was making him hard.

“I changed my mind.”

Jace looked at her for a long moment, then laughed. She was serious.

“Darling, you don’t change your mind. Ever.” Charlotte Holden might be a Southern belle, but her Kevlar wall of stubbornness could rival a Southern granny’s—and having been raised by the most mule-headed granny in the world, that was saying a lot. Oh, he believed that Charlotte had changed her mind, he just didn’t know why. “So what happened with your debutante sisters yesterday that has you desperate enough to call me?”

“Sugar Peaches,” she corrected. “And since when do you keep up on Sugar gossip?”

“Since you started calling yourself a Sugar Peach. I mean, weren’t the Peaches your mom’s thing?”

Charlotte had once confided in him that she moved to Atlanta to escape the pressure of following in her mother’s footsteps. The pageants and parties and social ladder climbing were Babette’s dream for Charlotte. Charlotte’s dream was to save lives—and she was a master at it.

“Well, it’s my thing now,” she said, and he couldn’t help but notice the resignation in her voice. He wanted to know what else had changed, then realized it didn’t matter anymore. “And that means I have to be back as soon as possible. Founder’s Day is only three weeks off, and I have a lot to do.”

“Yeah, me too.” He had to get an annulment, convince his buddy to fix Hattie’s car, and secure that loan before Dale pulled his offer.

“Good, because as the current regent of the Sugar Peaches it falls to me to plan the Founder’s Day Fair, so this trip needs to be a quickie,” she said, her bossy, take-charge tone making him smile.

“Quickies aren’t really my specialty,” he said. “But who am I to argue with a lady?”

“Easy and discreet, Jace. The last thing I need right now is to explain this to my parents,” she clarified as though he was slow, as though he didn’t know just how anxious she was to put the past behind them. Which shouldn’t have pissed him off, because that was what he wanted, too. But it did.

“Easy and discreet? Kind of like our marriage?” he mused.

She looked at him for a long moment and then slowly shook her head. “Nothing about our marriage was easy, Jace,” she said, and the absolute certainty in her voice made him want to prove her wrong.

“There was one easy thing between us,” Jace said, stepping into her and closing the distance, trapping her between the car and his body. He reached behind her neck, crushed his mouth to hers, and kissed the hell out of her.

Only one touch, and she was kissing him back. No hesitation, no second-guessing, just—pow —debutante to seductress. Not interested to tongue down his throat in two seconds flat.

And holy fucking God, it was perfect. The way she felt, the way she tasted, the way she crawled up his body and demanded more…How had he forgotten this side of her?

That insane pull between them, which he’d convinced himself didn’t exist, wasn’t only burning a hole through his clothes—and his mission—it also wasn’t one-sided. Which told him that he should a) back the hell up, and b) immediately cancel this field trip they had planned. Before things got crazy.

So he deepened the kiss, because why the hell not? Charlotte had her prim and proper hands all over him, and he was certain that this was the best kiss he’d ever had. Hot and needy and raw and so damn desperate it was like driving down the track at three hundred miles per hour with no breaks.

Then he realized that this was not only the best kiss ever, but probably also their last kiss ever, and he slowly pulled back, tugging her lower lip between his teeth as long as he could until the connection finally broke. And damn, he wished he hadn’t stopped.

That one second of uncharged air was all Charlotte needed. Sure, she was breathing heavily, and her gaze was dazed and confused. A mirror image of his own. But within a split second her eyes frosted over and that unflinching fortitude was back.

Not that he was fooled. Jace knew that they had chemistry, remembered how electric they were together, but what had arched between them just now floored him. And it had floored her, too.

Charlotte cleared her throat. “This changes nothing.”

Jace lowered his gaze to her hands, which were resting on the buckle of his belt. “Oh, it changes something.” 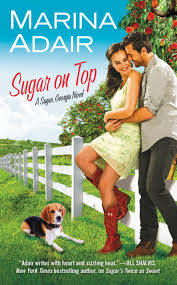 The last thing Glory Mann wants is to become chairman of the Miss Peach Pageant in Sugar, Georgia. Spending months hearing nothing but the clinking of pearls and judgment? No thank you! But when Glory is forced to take the rap for a scandal she didn’t commit, the judge sentences her to head the committee. Even worse, her co-chairman is rugged, ripped . . . and barely knows she’s alive.

He’s ready and willing
Single dad Cal McGraw can’t take any more drama in his life. After a difficult divorce, his little girl became a boy-crazy teenager and his hands are full. The last thing he needs is to spend his down time with the town bad girl. Glory is pure trouble-tempting and tantalizing trouble. But he can’t deny the strong chemistry between them-or how her touch turns him inside out. Now as squabbles threaten to blow up the contest and the town of Sugar itself, Cal must risk everything on the sexy wild card to get a second chance at love . . . 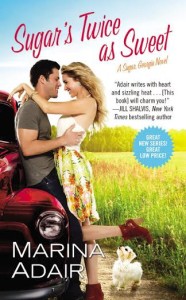 Thanks to a cheating fiance, Josephina Harrington’s perfect life just crashed and burned. Moving in with her overbearing parents is definitely not an option. No, she needs to prove she can make it on her own. And she will—by turning her great-aunt’s old plantation house into a destination getaway. She’s just not expecting her contractor to be so hands-on—and so totally irresistible.

…but everything she wants

Bad-boy golf champion Brett McGraw figured his hometown of Sugar, Georgia, was the perfect place to lay low and get his life back up to par. The leggy blonde with a pint-sized pup is the kind of sweet ’n’ sassy trouble he never saw coming. She doesn’t know a nut from a bolt and before long, he’s renovating her house…as she steals his heart. Can he convince Josephina that his womanizing ways are in the past and he’s ready for forever? 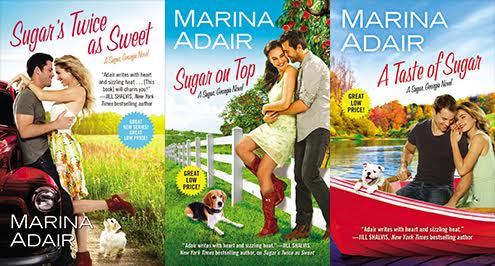