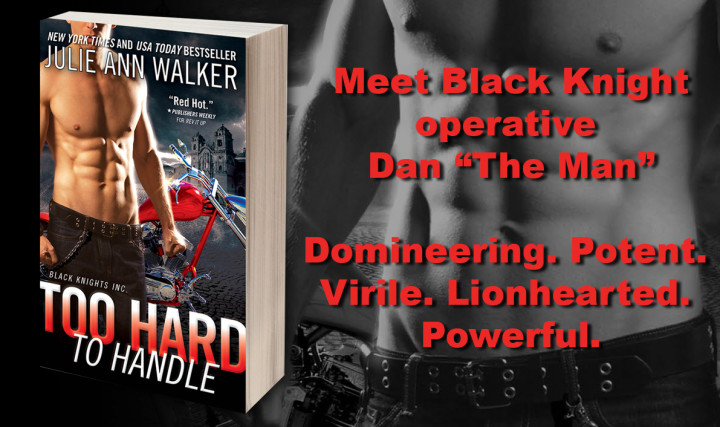 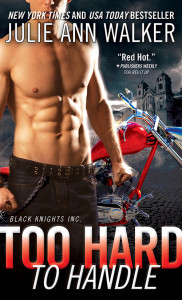 Title: Too Hard To Handle

“The Man” is back
Dan “The Man” Currington is back in fighting form with a mission that takes him four thousand miles south of BKI headquarters, high in the Andes Mountains of Peru. He’s hot on the trail of a rogue CIA agent selling classified government secrets to the highest bidder, when Penni DePaul arrives on the scene. Suddenly the stakes are higher, and keeping Penni safe becomes Dan’s number one priority.

And this time she’s ready
A lot has changed since former Secret Service Agent Penni DePaul last saw Dan. Now a civilian, she’s excited about what the future might hold. But before she can grab onto that future with both hands, she has to tie up some loose ends-namely, Dan Currington, the man she just can’t forget. And a secret that’s going to change both their lives-if they can stay alive, that is.

Exclusive Excerpt from Julie Ann Walker’s TOO HARD TO HANDLE

“Some women like a little mystery in their men.” He shrugged one big shoulder.

“You mean some girls like it,” she corrected. Her proximity to him made her head spin and her knees tremble with the desire to straddle him. “I stopped playing games, including hard to get, when I was in my twenties.”

“Mmm,” he grumbled. Now he was Mr. Grumbly Grumbleton. She couldn’t decide which she liked better. Growlerton or Grumbleton. They were both sexy as hell.

“You have no idea how glad I am to hear you say that,” he rumbled.

“’Cause I don’t believe in playing games either.”

“Oh, I believe in a lot of things,” he whispered, a muscle ticking in his jaw beneath his beard stubble. It made the crescent-moon scar twitch.

And now not only was her heart pounding and her blood running hot, but there was also a lump sitting in the middle of her throat. The things he believed in were so pure. So simple. And to hear them come out of the mouth of such a complex, mysterious man who operated every day in a complex and mysterious world just made them all the more poignant.

“I also believe in asking for what I want,” he went on, a dark, carnal gleam in his eyes. A little thrill skittered through her. “I’ll even ask for it nicely.” 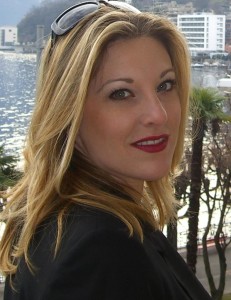 Julie Ann Walker is the USA Today and New York Times bestselling Author of the Black Knights Inc. romantic suspense series. She is prone to spouting movie quotes and song lyrics. She’ll never say no to sharing a glass of wine or going for a long walk. She prefers impromptu travel over the scheduled kind, and she takes her coffee with milk. You can find her on her bicycle along the lake shore in Chicago or blasting away at her keyboard, trying to wrangle her capricious imagination into submission. For more information, please visit www.julieannwalker.com or follow her on Facebook www.facebook.com/jawalkerauthor and/or Twitter @JAWalkerAuthor.