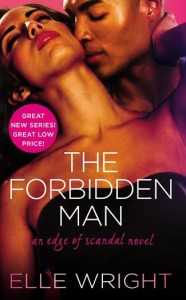 In Love With the Wrong Man

Sydney Williams has forgiven her fiancé, Den, more times than she can count. But his latest betrayal just days before their wedding is too big to ignore. Shocking her friends and family, she calls off the engagement. She walks out on Den . . . and into the arms of his brother, Morgan.
Known as a player, Morgan Smith has secretly spent years fighting his feelings for Sydney. When Den’s latest dirty deed leaves Sydney devastated, Morgan can’t stop himself from coming to her rescue. What begins as friendship quickly escalates into all-consuming passion. Despite their intense connection, Sydney would rather deny her desire than come between brothers. But as Morgan is determined to make Sydney his, Den won’t give her up without a fight . . .

“Are you still feeling cold?” he asked, adjusting the heater and finishing off the contents of his flask.

“Actually, I’m feeling pretty hot.” She jumped when he started coughing. “Are you okay?”

He wiped his mouth. “I’m straight.”

“You sure?” Syd studied his face as she smoothed her hand over his back.

“Yeah.” He closed the flask and tucked it back into his pocket. “It’s the liquor.”

“The bourbon.” He patted his pocket. “It’s making you hot.”

“Somehow I doubt that,” she mumbled.

“What?” he asked, leaning in closer.

I doubt it’s the liquor. “Forget it. I’m cold again.” She burrowed into him.

“You want me to make you hot?” he asked.

Her eyes flashed to his and her lips parted.

When his hand caressed her cheek, her eyes closed of their own volition. Time seemed to stand still. She felt his warm breath on her skin above her lips. “I think—”

She dug her nails into his knee. “Maybe you should call Kent again. See where he is.”

He slid his thumb down the side of her neck.

She exhaled. So this is what Terry McMillan meant when she waited to exhale?  “Because this isn’t going anywhere good. You’re acting like you want to kiss me and I know that’s not true,” she joked.

He clenched her hair in his hands and tugged gently.

She searched his eyes. “Do you? I mean—do you want to?”

“I do—and so many other things.”

She let out a nervous giggle. “I think you’re feeling the effects of that gasoline you’re drinking, Morgan.”

His gaze dropped to her mouth as his hand crept up her thigh and rested on her hip. She jumped in surprise when he squeezed. “Actually, I don’t believe I’m drunk enough,” he said. “At this point, I know exactly what I’m doing, which means I’d be held responsible for my actions.”

Syd placed her hands on his stomach and felt his taut muscles tighten in response. “Den would kill you. So would Red.”

Morgan traced her lips with his thumb. “It may be worth it. Let me . . .” Then, his mouth was on hers, drawing a low moan from her mouth. The simple touch of his lips to hers set off a fire in Syd that seemed to burn brighter and hotter with every second.

She wrapped her arms tightly around his neck as he continued to assault her senses with his kisses. He slid his tongue across her bottom lip, demanding entrance, which she happily granted. She gripped a fistful of his hair as he pulled her onto his lap. He rocked into her, introducing her to his rock hard erection. She braced her other hand against the window as she grinded into him. He trailed hot, wet kisses down her throat and cupped her breasts in his hands. As his thumbs traced her nipples, she cried out and he captured her cry with his hot mouth.

Reluctantly, she tried to pull away, but he latched onto her bottom lip with his teeth and sucked. He obviously wasn’t ready for this to end . . . neither was she. 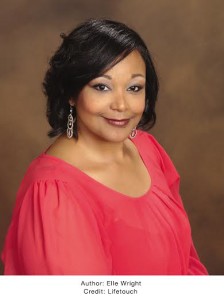 Born and raised in Southeast Michigan near Ann Arbor, Elle learned the importance of reading from her mother. It was also her mother who, later on in her life, gave Elle her first romance nove: Indigo by Beverly Jenkins. From that moment on, Elle became a fan of Ms. Jenkins for life and a lover of all things romance. An old journal she wrote back in college became her first book (which she still wants to publish one day).