Professional assassin John Lago faces off against his deadliest adversary yet—his wife—in Hostile Takeover, the exciting sequel to Shane Kuhn’s bestselling debut The Intern’s Handbook, which the New York Post called “a sexy, darkly comic thriller.”At the end of The Intern’s Handbook, John tracks down his nemesis Alice but instead of putting a bullet in her head, he puts a ring on her finger and marries her. Together, they execute a hostile takeover of Human Resources, Inc., the “placement agency” that trains young assassins to infiltrate corporations disguised as interns and knock off high profile targets. As HR’s former top operatives, they are successful until conflicting management styles cause an ugly breakup that locks John out of the bedroom and the boardroom.But when Alice takes on a new HR target, John is forced to return to the office battlefield in a role he swore he would never play again: the intern. What starts out as a deadly showdown turns into the two of them fighting side by side to save HR, Inc.—and their marriage.“Those who like Dexter will love John Lago” (Booklist), and in Shane Kuhn’s sequel to The Intern’s Handbook, readers will be rooting for this smart, witty antihero to come out on top. 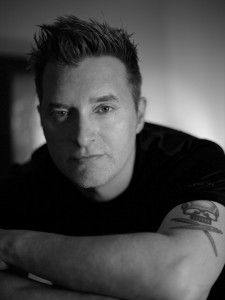 Shane Kuhn is a writer, director, and producer working in the entertainment business and advertising. He is one of the original cofounders of the Slamdance Film Festival and he’s currently developing a novella and television series about a highly sophisticated international heist ring for the European market. He lives and works in Colorado, Los Angeles, and the Bay Area. He is the author of The Intern’s Handbook, bought for film by Sony Pictures, and Hostile Takeover.

Giveaway Ends 7.21.15 and open to all who can legally enter.
US only – must be over 13 or have your parents permission to enter.
An email will be sent and you have 48 hours to reply or a new winner will be chosen.
Winner will be announced within 48 hours at the end of the giveaway. Giveaway is organized by Bookhounds and sponsored by the publisher.
It has no affiliation with Facebook, Twitter or any other entitiy.
Void where prohibited.