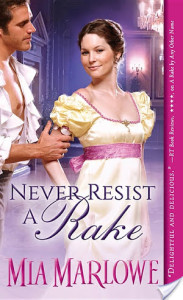 Can he fool his new family?

John Fitzhugh Barrett, surprised to learn he is heir to a marquessate, is determined his new status won’t mean giving up his freedom. But as families from all over England descend upon Somerfield Park for the shooting season, their unmarried daughters are lining up to bag the newest trophy buck—him.

Or is he only fooling himself?

John’s instinct for self-preservation inspires him to divide his attentions between a scandalous young widow, and the safely ineligible Rebecca Kearsey, daughter of a destitute baron.

The charade gives John the illusion of controlling the game but when he loses his heart to the beautiful Rebecca, all bets are off.

The road to love is never easy and often times it takes some well-placed advice from an older and wiser friend or relation to make Happily Ever After happen. For the denizens of Mia Marlowe’s Somerfield Park, the Dowager Marchioness of Somerset, Lady Phillipa, is the lady to call upon for any kind of advice. And so, to celebrate the June release of Never Resist a Rake, we are pleased to share a piece of advice from Lady Phillipa.

“The wellborn gentleman’s propensity for gambling never ceases to amaze, especially since most wagers are guaranteed ways of exchanging something for nothing. Ladies also have the urge to indulge in games of chance, but they satisfy this need by giving their trust to men…with similar results.”

John Fitzhugh Barrett was not going to make a fool of Baron Kearsey’s daughter. No, sir. From all accounts, the new Lord Hartley had been running with a fast crowd and had no doubt kissed dozens of women.

Rebecca would show him. A virtuous girl was just as good as a bad girl. Better. She’d kiss him all right. She’d kiss the man into next week.

She prided herself on reasoned thought and knew she was being illogical, but before she could untangle all the invalid syllogisms running through her head, she pressed her mouth against his with such force, their eye teeth knocked together. No matter. He wasn’t going to think her a missish little thing who kissed like an awkward first cousin. She was going to put some passion into it.

As much as she knew about passion, at any rate.

He covered her hands with his and she realized he was trying to encourage her to soften her grip on his ears. So she uncurled her fingers and slid her hands down to palm his cheeks.

He groaned into her mouth.

I’m getting good at this.

Then when he groaned again, she decided it was probably not a good thing. There was a definite edge of pain in the sound. Her fingertips were pressing too hard on the skin around his swollen eye.

Botheration! There were so many things to think about all at once. She eased up. Her lips softened and she slanted her mouth over his.

This time the groan was different—pleased and needy all at once. A little feral.

The thrill of danger danced on her spine. Imagining kissing a man was safe. Holy, almost. She could envision a perfectly acceptable setting for the kiss—a garden in full bloom, an elegant parlor after a well-spoken proposal, before an altar and a church full of witnesses. Heaven knew, she’d dreamed of a kiss often enough.

Kissing a man for real as he reclined in his bed was wicked beyond imagining.

Her imagined kisses were always chaste too. This one was decidedly not. Something inside her went all warm and liquid.

John cupped the back of her head with gentleness as he teased her lips to part by tracing the seam of them with the tip of his tongue. She gave up, and he invaded her. His breath swirled into her, filling her, drawing her back into him.

His tongue, oh Lud, his tongue…

Rebecca had never suspected a kiss could be so…so…involving. It wasn’t just their mouths meeting. Every fiber in her body strained toward him.

She had to stop right now or she’d never be able to. She pulled back and, to her surprise, he let her go. She almost expected him to drag her down onto the feather tick with him.

A wicked part of her was disappointed when he didn’t.


Mia Marlowe is a rising star whose Touch of a Rogue was named one of Publishers Weekly‘s Top Ten Best Romances for Spring 2012. Mia learned about storytelling while singing professional opera. She knows what it’s like to sing a high “C” in a corset, so she empathizes with the trials of her historical heroines. Mia resides in Boston, Massachusetts. For more visit www.miamarlowe.com. 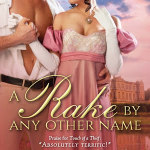 Interview A RAKE BY ANY OTHER NAME by MIA MARLOWE