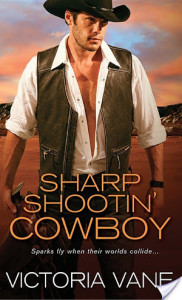 Weary warrior… After eight years as a Marine sniper, war-scarred Reid Everett is back in his native Wyoming. He knows and loves this rugged land, so working for wildlife services to reduce the booming wolf population suits him to a T.

Caring crusader… Wildlife biologist Haley Cooper is desperate to make a difference. Leaving the world of academia behind, she accepts a position as a wolf advocate to protect the animals she loves.

Raw attraction… Their jobs set them on a collision course, but chemistry sparks like wildfire between Reid and Haley. They’ll have to brave some rough territory if they hope to reconcile their polarizing views with a passion that won’t be denied.

He could see her getting more worked up by the minute, and damned if he wasn’t also—just not in the same way. She’d been baiting him from the start, spewing arguments that usually just pissed him off, but in this case, it was turning him on.

His gaze locked on her mouth. Her tongue darted out as if she read his thoughts. She drew a breath as if to formulate another rebuttal, but he’d had enough. Before her lips could spout off anymore of the Pacifist Tree Hugger’s Manifesto, he pulled her into his arms and silenced her with his.

The kiss came without warning, and Haley was too stunned at first to react. He began gently enough, his lips sliding over hers, hands cupping her face, thumbs stroking her jaw, and then he grew more insistent, his tongue probing the seal of her lips. His callused hands were simultaneously firm and gentle, and his lips paradoxically soft and commanding.

Mere seconds had her head spinning and stomach fluttering. She was slipping fast and not about to let him pull her in any deeper. Part of her wanted to give into it, to see where it might lead, but the other half resented his audacity. Her pride won out. She resisted the urge to soften, to open to him, then stiffened, pressing her hands against his chest.

He released her instantly.

She stepped back, knees weak and pulse racing. “I didn’t come here looking to hook up.”

“Neither did I. But sometimes unexpected things happen.” His gaze locked with hers, a look of speculation gleaming in his eyes. “When they do, it’s best to just go with your gut instinct.”

“That so? Well all my instincts scream ‘no marines,’ so don’t let it happen again.”

Suddenly remembering the cue in her hand, Haley turned back to the table. It took all of her will to focus back on the game. She could hardly believe how he’d nearly unraveled her with a single kiss. Then again, no one had ever kissed her like that. She made her break, pocketing the one, and then moved methodically around the table, calling each shot as she sank every solid. Only the eight ball remained, but it was trapped behind two stripes.

Reid’s lips curved with smug certainty. “Looks like I’ll get my turn after all.”

“Don’t count your chickens, cowboy.” She laid down her cue and searched the wall behind her for a shorter one. “Jump cue,” she answered his silent question.

“Nope.” Approaching the table, she angled for her shot. She could almost feel his eyes on her ass. She glanced over her shoulder. Sure enough. He was leaning against the wall with both arms crossed over his broad chest, his gaze zeroed in on her behind.

“Sure am,” he confessed, unabashed.

He was sadly mistaken if he thought he’d unnerve her. Keeping him in her peripheral vision, she widened her stance and stretched out over the table. All sign of smugness evaporated from his face. He tugged on his jeans.

Haley grinned, reveling in her small victory, and then prepared for a bigger one. “Eight ball, side pocket,” she declared with confidence. On a three count she took the shot, jumping the stripes to pocket the eight. “Yeah baby!” She threw down the cue and fisted the air, gloating in her triumph.

Reid gaped at the table. “I’ll be goddamned. How did you learn to do that?”

“My grandpa was a regional pool champion.”

“That bit of information was mighty sneaky to withhold.”

“Victoria Vane continually surprises the reader in her latest western romance Rough Rider as she plunges audiences into the world of bull riders and cattle ranchers.”

“Ms. Vane entertained me… had me at the edge of my seat with twists and turns, and even had me scream at Dirk’s stupidity, so she completely EARNS my top score of 5 fingers up & 10 toes.”

“I honestly loved this book! This is an unconventional love story about second chances. The characters were great on their own, but it was the unique way that the plot unfolded that sold the book for me… The romance was passionate, and the road to a happy ending was bumpy with some detours along the way.” – The Romance Reviews

“Another winner. It was a really good tale in the rough and tumbled world of cowboys and bull riding…  if you get a chance, check it out and also, check out [Victoria Vane’s] other books. You won’t be disappointed.” – BTS Magazine 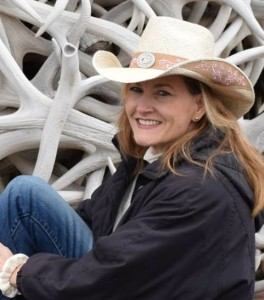 You show and train horses.  What is your favorite horse and what arena do you show them in?

I have had a love for horses for as long as I can remember and have owned several breeds (Quarter horses, Thoroughbreds, an Oldenburg and several Arabians) but have a special affinity for Arabian horses. While I no longer show horses, I have trained several horses for the show ring in both English and Western disciplines.  I also taught my husband and children to ride. For many years horses were a central part of our lives. These days I only have one horse, a grey Arabian named Princeton that I primarily ride for pleasure. 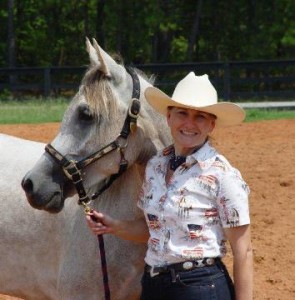 What kind of training is involved for showing your horse?

I follow the school of natural horsemanship which means using very few training aids. It takes longer to do this way but is definitely worthwhile to gain willing cooperation from the horse. Much of what I have done with horses is featured in my upcoming release a cowboy’s whisper. I love developing a special working relationship with my horses. 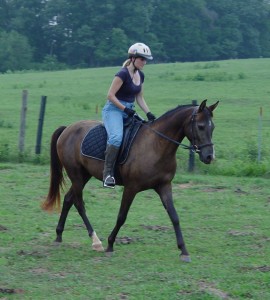 Is it easier to train a horse or a man?

Cowboys are the new rock stars of romance.  Will you be exploring more cowboys?

Absolutely! In addition to the fourth book in my Hot Cowboy Nights series from Sourcebooks that features a Native American horse whisperer, I have a Las Vegas set contemporary Western romance series coming in January 2016 from Kensington that features bull riding. I’m excited to reveal more about that very soon. 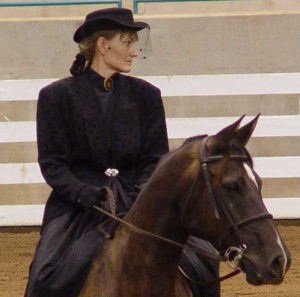 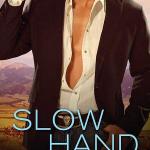