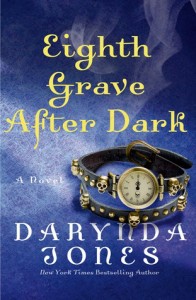 Sometimes I wonder if the purpose of my life
is to serve as a cautionary tale to others.
--T-shirt

With twelve hellhounds after her, pregnant Charley Davidson takes refuge at the only place she thinks they can’t get to her: the grounds of an abandoned convent. But after months of being cooped up there, Charley is ready to pop. Both metaphorically and literally since she is now roughly the size of a beached whale. Fortunately, a new case has captured her attention, one that involves a murder on the very grounds the team has taken shelter upon. A decades-old murder of the newly-vowed nun she keeps seeing in the shadows is almost enough to pull her out of her doldrums.

Charley’s been forbidden to step foot off the sacred grounds. While the angry hellhounds can’t traverse the consecrated soil, they can lurk just beyond its borders. They have the entire team on edge, especially Reyes. And if Charley didn’t know better, she would swear Reyes is getting sick. He grows hotter with every moment that passes, his heat scorching across her skin every time he’s near, but naturally he swears he’s fine.

While the team searches for clues on the Twelve, Charley just wants answers and is powerless to get them. But the mass of friends they’ve accrued helps. They convince her even more that everyone in her recent life has somehow been drawn to her, as though they were a part of a bigger picture all along. But the good feelings don’t last for long because Charley is about to get the surprise of her crazy, mixed-up, supernatural life…. 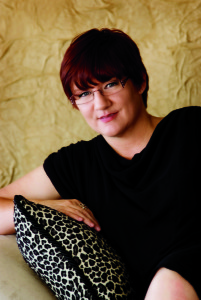 New York Times and USA Today bestselling author DARYNDA JONES won a RITA Award for best first novel for First Grave On The Right. As a born storyteller, she grew up spinning tales of dashing damsels and heroes in distress for any unfortunate soul who happened by, annoying man and beast alike. Jones lives in the Land of Enchantment, also known as Albuquerque, New Mexico, with her husband and two beautiful sons, the Mighty, Mighty Jones Boys. 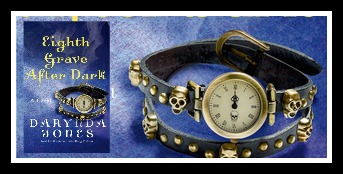 I was lucky to participate in a live conversation with DARYNDA JONES, author of the Charley Davidson series.

Mary: Hi, Darynda. It’s Mary from Book Hounds. Of course, my question is dog related. Were the hellhounds inspired by your own dogs?

Darynda Jones: That’s the best idea I ever heard. You know, I will say that’s very possible. They have put me through heck. I was so excited. I just got my author copies of Eighth Grave, I put the box in my office, and I’m so excited. I get up the next morning and my eight-month-old, Steffy [sp], decided to eat one.

Thank God she only ate one because she ripped through that box and could have had the entire box. So it could very well be. You might be onto something. Thank you.

I have to include a question from Kristie at Dark Faerie Tales  since it leads into my question.

Kristie: I have kind of a two-fold question. You mentioned a possible spinoff in the future. When will that spin–in your planning, how far away is that spinoff going to be? And who is it going to feature? And is that character one of your favorite characters throughout this series? Or is this somebody that you’ve grown to love?

I haven’t been telling people this, but, I love that you asked it. I do want to do it someday, so I thought maybe if I put it out there people would really want it. My plan was to have both the Charley series and the spinoff going at the same time, but because of timelines it wouldn’t have worked. Even my agent was against it. She was like no, you’re just going to have to wait until the Charley books end and then do the spinoff.

Of course, the way my mind is so chaotic and all over the place, I’m already working on the books for this spinoff that can’t happen.

I will say that from Eighth Grave they happen probably about 19 years later, if that gives you an idea of who it might be about. It’s Charley and Reyes’s daughter, and it’s her story.

It does feature a character who I’ve introduced who I’m absolutely in love with. Osh, or Osh’ekiel, is going to be in it too. So that’s going to be their books later on down the line. Keep your fingers crossed.

Kristie: I will keep my fingers crossed for it. Thank you.

Mary: Oh, I just got chills when you said that. I have a follow up.

Mary: I was a huge fan of Dead Like Me. Were there books that inspired you to write Charley or TV shows?

Darynda Jones: I don’t know as far as books. You know, believe it or not, this is going to sound horrible but I didn’t really read that much paranormal before I got published in paranormal. Now I read almost all paranormal, I love it so much.

But I didn’t really read it before then. Honestly, I read historical romance, like, forever. That’s all I read.

I’ve written since I was little, and I realized growing up that I have always written either paranormal or science fiction. So I don’t think hardly any of my stories were just normal.

I think that’s part of it. Also, just a general love of anything paranormal. I’m a huge fan of Joss Whedon. I love Buffy and Angel and all of them. When I originally came up with Charley, that was my plan. I wanted just an ordinary world, an ordinary woman, with a little bit of Buffy in her.

Of course, that has grown and expanded. But, if anything I would probably say Buffy. 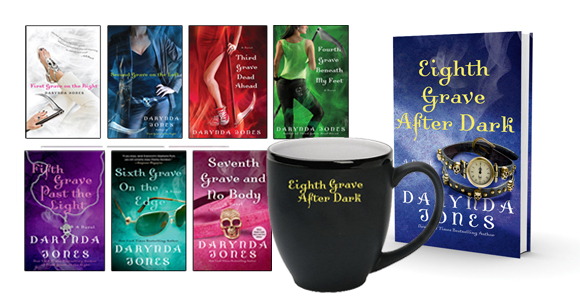 Giveaway open to US addresses only.

Giveaway Ends 5.22.15 and open to all who can legally enter.
US only – must be over 18 or have your parents permission to enter.
An email will be sent and you have 48 hours to reply or a new winner will be chosen.
Winner will be announced within 48 hours at the end of the giveaway. Giveaway is organized by Bookhounds and sponsored by publisher
It has no affiliation with Facebook, Twitter or any other entitiy.
Void where prohibited.
Courtesy of St Martins Press
Not responsible for lost, stolen or damaged prize. 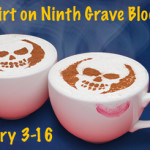 #Giveaway Review THE DIRT ON THE NINTH GRAVE by Da