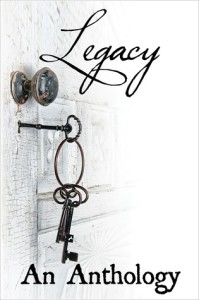 What will you leave behind?

Long after we've left this world, our legacy remains. Or doesn't. Or remains only in the minds of those who knew us, those whose lives we've touched. Those we've written to, or about.

Fourteen authors sat down during the month of January 2015, shut out distractions of the outside world and wrote about the subject. The resulting fiction and nonfiction stories fill the pages of Legacy: An Anthology. The book includes stories from Kristopher Jansma, winner of the 2014 Sherwood Anderson Award for Fiction, New York Times best-selling author Regina Calcaterra and Canadian best-selling author Marissa Stapley among others.

Within these pages, there is laughter, pride and hope. There is romance and rock and roll. Certain messages are eerie, while others bestow a sense of peace. The collection, through the discerning lens of each writer, runs the gamut of the human experience. 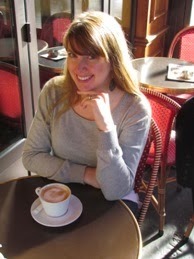 Amazon best-selling author Vicki Lesage proves daily that raising two French kids isn’t as easy as the hype lets on. In her three minutes of spare time per week, she writes, sips bubbly, and prepares for the impending zombie apocalypse. She lives in Paris with her French husband, rambunctious son, and charming daughter, all of whom mercifully don’t laugh when she says “au revoir.” She penned two books, “Confessions of a Paris Party Girl” and “Confessions of a Paris Potty Trainer,” in between diaper changes and wine refills. She writes about the ups and downs of life in the City of Light at VickiLesage.com.

My tiny nightstand in my tiny Parisian apartment is pretty cool, I admit. But did I mention it’s tiny? So that’s one thing that’s NOT cooler about living in Paris! As for what’s on it… an alarm clock I never use because my babies always wake me up first. Oh, you meant books? My Kindle, loaded with a variety of chick lit, humor, and anything France-related.

When someone hops on the Métro just as the doors are closing and almost gets stuck. Watch out, people! Not only can they get seriously injured, but (and I daresay this is more important) it delays the whole Métro line. Of course, I’m just as guilty. Last week I got my hair stuck in the door (but at least I didn’t slow down the train!) and the worst part was it happened at a station where the doors open on the other side, and NO OTHER STATIONS FOR THE REST OF MY JOURNEY opened on that side. So I had to rip my hair out in order to free myself, but had to do so subtly so that no one would know how stupid I’d been.

Speaking French. Life would be so much easier if I could be as funny as (I think) I am in English! Boring administrative tasks would go much more smoothly, and things like explaining to your doctor exactly what’s hurting would be way less embarrassing.

Speaking French. I got off the phone the other day with my son’s school and realized I’d handled an entire 5-minute conversation while walking down a noisy street and hadn’t messed up once. I’d finally succeeded! I was a winner! Then I nearly stepped in a pile of dog poop so I realized I shouldn’t get too cocky.

Adria J. Cimino (co-founder of Velvet Morning Press, which published Legacy: An Anthology) is the force! We make a great team, if I do say so myself. I handle most of the web and graphic design stuff, while she handles all the logistics involved in pairing up so many awesome bloggers with so many awesome authors. I’m happy to be considered “just an author” for this tour and let her manage all the moving parts. I also can’t wait to read everyone else’s interviews! 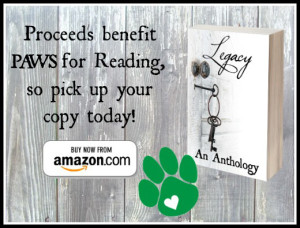