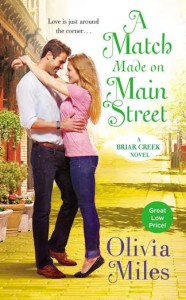 This kitchen isn’t big enough for both of them…

If there’s anything Anna Madison knows, it’s how to turn life’s lemons into a lemonade cocktail served in a vintage glass. So when her beloved Briar Creek café burns down, she sees it as an opportunity to start fresh. But the only kitchen available to her is in the diner down the street—owned by her sinfully sexy ex.

If Anna thinks she can take over his greasy-spoon kitchen with her high-end cuisine, Mark Hastings is about to set her straight fast. Their breakup is his biggest regret—not that he’ll ever admit it to her. Nope, he’d rather show her exactly what she’s been missing. With desire set on a high simmer, their menu is about to get a whole lot spicier…

Mark leaned in, catching a whiff of her sweet scent as he did. He closed his eyes briefly, trying to capture the single sense. When he looked up, Anna was staring at him, her gaze hooded. He could lean in, just another inch, remember what it felt like to kiss her mouth, to feel her soft curves pressed against him.

He pulled himself back in the stool instead. He was here to find her friendship again. Nothing more. “The bookstore’s doing fine now; I see people in there all the time. It’s never looked so great.”

Anna sighed through a small smile. “It does, yes. But…that’s not what has me worried.  I took out a loan to match Grace’s investment. She’s covering rent and the bookstore renovation; I’m covering well…everything else. For now. It was all going to be fine. More than fine. And then–”

He let out a low whistle. It was exactly the kind of situation that made Hastings to appealing. The place was paid up; they owned it outright. A new venture, of any kind, could never offer the same security. One day it could be booming, the next…

He leaned into his elbow. “So what’s your plan, then?”

She looked at him quizzically. “I intend to win this contest!”

He burst out laughing, hearing his own foolish desires in her preposterous statement. Until now, winning had been a vague notion, not something he was banking on, but hearing her say it aloud, a desire to not only compete but to win, made him suddenly believe it was possible. That anything was possible.

“I do intend to win!” Anna cried, but even she couldn’t stop from laughing. The sound rolled through the room and pulled at his heart, filling holes he didn’t even know were there.

He didn’t realize he’d stopped laughing until she did. The air went still, punctured only by the sound of his heart beating in his chest, and he knew he couldn’t hold back any longer. Without thinking, or daring to consider the consequences, he leaned into her and her eyes flashed with surprise, her lashes fluttering quickly as he slid off his stool and closed the distance between them.

A gasp of surprise escaped her throat as he brought his lips to hers and his hands came around her waist, pulling her close to his chest until he felt her body relax on each kiss. He sensed her hesitation, but he couldn’t pull back, not when her lips were on his, her sweet taste filling his senses. She parted her mouth, and he pulled her closer, feeling the soft swell of her breasts against his chest. His groin pooled with warmth as her thighs rubbed against his. He pressed his palms deeper into her back, and lower, resisting the urge to explore her hips, knowing if he did he wouldn’t be able to stop.  And he should stop–he should. But…he couldn’t.

He kissed her, as if for the first time, tasting the forbidden fruit, knowing it was wrong, wrong, wrong, even thought it felt so damn right. He tore his lips from hers, letting his mouth roam her neck, burying himself into her hair, that coconut-scented hair, and breathed into her ear, wondering if she would run, if she’d push him back, tell him to go.

He pulled back, watching the way her eyes searched his. He should say something, explain himself, but there was nothing to say.

Anna’s cheeks were dotted with pink as she picked up a knife and pulled the vegetables from the basket. His gaze lingered her on a few moments more, watching the way she expertly chopped and diced, the way they’d been instructed in school, fingers tucked.

“Anna.” His voice was low and husky.

He should tell her it was a mistake, that it couldn’t happen again. That he wanted to be friends, to make her understand once and for all that it was all they ever should have been.

“We should get to work,” she said abruptly, and he hated the slight quiver in her voice. “We still have a lot do and we leave for Cedar Valley tomorrow afternoon.”

They’d be at the lodge for two nights; he’d have time to talk to her then. For now, she was right. It was time to get to work, put all personal matters aside, and focus on winning this contest. And getting what they wanted at long last. 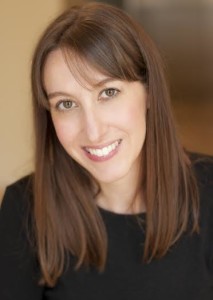 About Olivia Miles:
Having grown up in New England, Olivia Miles attended McGill University in Montreal, Quebec before settling in Chicago where she lives with her husband, their daughter, and two ridiculously pampered pups. When she is not chasing after her little ones, she is hard at work creating feisty heroines and alpha heroes with a heart. A city girl with a fondness for small town charm, Olivia enjoys highlighting both ways of life in her stories.
Olivia on line
Goodreads   – Facebook – Website  Twitter

1. What is on your nightstand?
A lamp, my Kindle, sometimes my glasses, and always a book. I can never be without a book on my nightstand, so when one goes back on the shelf, another comes off.
2 What makes you cringe?
Bad public behavior. Also, typos.
3. Do you obsessively plot out each point or just go with the flow?
I do plot out my books, but not obsessively (though some may disagree!). I usually do a general chapter by chapter outline with one or two lines giving the gist of each scene, but I more or less free write from there. Often this can lead to a new idea or a change in direction, at which point I do make changes to the outline accordingly so that the pacing is consistent, though I typically don’t venture so far off the map that a new ending is discovered 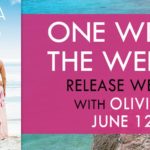 #Giveaway Excerpt ONE WEEK TO THE WEDDING by Olivi 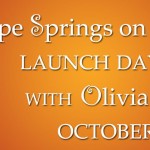