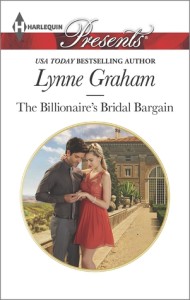 Cesare Sabatino never intended to marry. But if his thoughts did ever stray in that direction, the lucky woman's answer would have been a resounding "yes". Imagine his surprise when Lizzie Whitaker turns him down on the spot!

To get his hands on her Mediterranean island inheritance, Cesare must wed innocent Lizzie…and ensure she's carrying his heir! Luckily the formidable Italian is legendary for his powers of persuasion. With Lizzie desperate to save her family's farm, it's only a matter of time before she gives in…and discovers the many pleasurable benefits of wearing this tycoon's ring.

There were two photos included in the file, one of a nubile blonde teenager called Cristina and the other of her older sister Elisabetta. Was this familial insanity to visit yet another generation? Cesare raked long brown fingers through his luxuriant black hair, frustration pumping through every long lean line of his powerful body. He really didn’t have time for such nonsense in the middle of his working day. What was his father, Goffredo, playing at?

‘What’s up?’ Jonathan, his friend and a director of the Sabatino pharmaceutical empire, asked.

In answer, Cesare tossed the file to the other man. ‘Look at it and weep at the madness that can afflict even one’s seemingly sane relatives,’ he urged.

Frowning, Jonathan glanced through the sparse file and studied the photos. ‘The blonde’s not bad but a bit on the young side. The other one with the woolly hat on looks like a scarecrow. What on earth is the connection between you and some Yorkshire farming family?’

Jonathan hitched his well-cut trousers and took a seat. ‘Interesting?’

Cesare grimaced. ‘Only moderately. In the nineteen thirties my family owned a small island called Lionos in the Aegean Sea. Most of my ancestors on my father’s side are buried there. My grandmother, Athene, was born and raised there. But when her father went bust, Lionos was sold to an Italian called Geraldo Luccini.’

‘Matters, however, took a turn for the worse when Athene’s brother decided to get the island back into family hands by marrying Luccini’s daughter and then chose to jilt her at the altar.’

The other man raised his brows. ‘Nice…’

‘Her father was so enraged by the slight to his daughter and his family that Lionos was eternally tied up in Geraldo’s exceedingly complex will.’

‘The island cannot be sold and the two young women in that file are the current owners of Lionos by inheritance through their mother. The island can only be regained by my family through marriage between a Zirondi and a Luccini descendant and the birth of a child.’

‘You’re not serious?’ Jonathan was amazed.

‘A generation back, my father was serious enough to propose marriage to the mother of those two girls, Francesca, although I would point out that he genuinely fell in love with her. Luckily for us all, however, when he proposed she turned him down and married her farmer instead.’

‘Francesca didn’t settle for long with the farmer or with any of the men that followed him. Goffredo had a narrow escape,’ Cesare opined, lean, strong face grim, well aware that his laid-back and rather naive father could never have coped with so fickle a wife.

Lynne Graham lives in Northern Ireland and has been a keen romance reader since her teens. Happily married, Lynne has five children. Her eldest is her only natural child. Her other children, who are every bit as dear to her heart, are adopted. The family has a variety of pets, and Lynne loves gardening, cooking, collecting allsorts and is crazy about every aspect of Christmas.

Giveaway Ends 4.19.15 and open to all who can legally enter.
US only – must be over 18 or have your parents permission to enter.
An email will be sent and you have 24 hours to reply or a new winner will be chosen.
Winner will be announced within 48 hours at the end of the giveaway. Giveaway is organized by Bookhounds and sponsored by me
It has no affiliation with Facebook, Twitter or any other entitiy.
Void where prohibited. 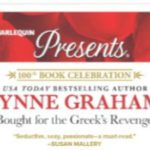 #Giveaway Excerpt BOUGHT FOR THE GREEK’S RE