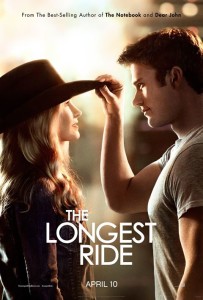 Based on the bestselling novel by master storyteller Nicholas Sparks, THE LONGEST RIDE centers on the star-crossed love affair between Luke, a former champion bull rider looking to make a comeback, and Sophia, a college student who is about to embark upon her dream job in New York City’s art world.  As conflicting paths and ideals test their relationship, Sophia and Luke make an unexpected connection with Ira, whose memories of his own decades-long romance with his beloved wife deeply inspire the young couple.  Spanning generations and two intertwining love stories, THE LONGEST RIDE explores the challenges and infinite rewards of enduring love.

Luke is trying to make a comeback after a horrible bull riding accident that almost took his life.  Sophia is a senior on scholarship at nearby Wake Forest University.  The two have a cute meet when her friends drag her to watch the local rodeo event to have fun.  She ends up with Luke’s hat and the two have an instant chemistry.  Sophia has an internship in New York at an art gallery where she hopes to launch her career.  Luke is just trying to keep the family farm.  Both decide that the fling is just what they need until they have deeper feeling for each other.

On the way back from 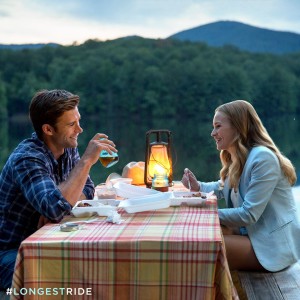 a date, Luke spots a car accident and they drag out the man before it explodes.  Sophia manages to get a box of letters out before the fire.  She returns the letters to the man at the hospital but not before she reads a few of them to Luke while waiting.  Ira, the gentleman that was rescued is recovering develops a frienship with Sophia and she reads the letters to him while he relives his romance with his wife, Ruth.  Now, this is where the famous Spark’s tugs at my heart.  I am so proud of myself for not crying.  Most of the women around me were well prepared with tissues. 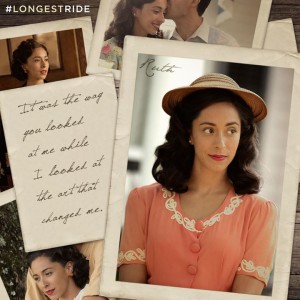 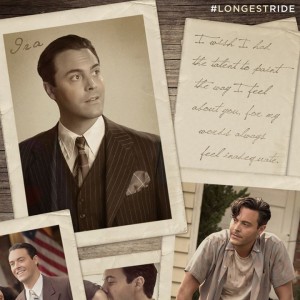 The romance between Ruth and Ira was done really nicely and foretold the young love of Sohpia and Luke. Ruth adores art and since Ira is injured in the war and can’t have kids, the two forge a life together filled with art.   It was really a great balance between the two.  Alan Alda plays Ira in his later years and the ending that truly brings the young lovers together with a very special gift.  Yes, it was a bit predictable if you have read the book but this screen version just did a stellar job of making it real.

Parents:  This is a PG 13 movie.  That being said it is really safe for even young teens.  Yes, there is a ton of kissing and some sexual situations between the main characters but it was done artistically with lots of filters, leaving a lot to the imagination.  It is probably much tamer than what is on cable television.  I don’t remember any obscenities and the only disturbing scene was from the accident when Luke was hurt.  That one made me turn away.  This one is totally SWOON-WORTHY …. 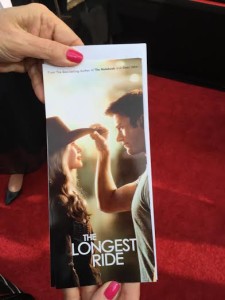 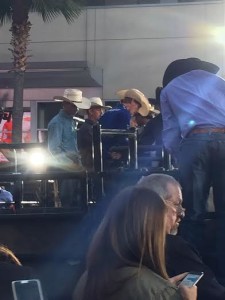 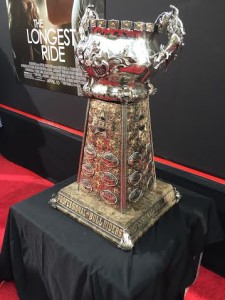 This is the golden ticket that got me into the event!  The pre-show was pretty fabulous as well.  There were bull riders and handsome cowboys galore – although I wish we could have gotten closer to see how cute they were . .

I was also able to stand next to the trophy in the movie – it was stunning and very large!

There were so many incredible things to see on the way into the theater! 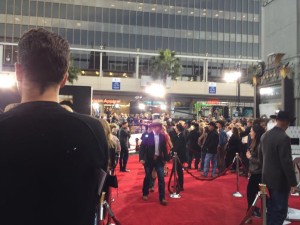 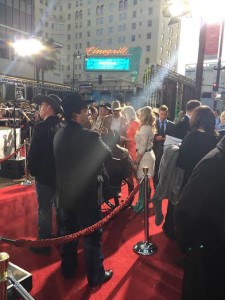 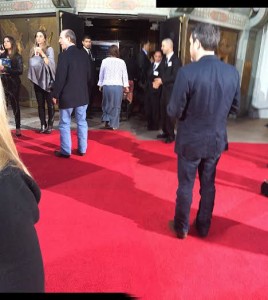