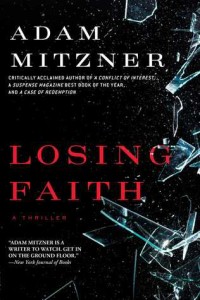 From the acclaimed author Publishers Weekly called “a gifted writer” comes this nail-biting legal thriller in the bestselling tradition of John Grisham and Scott Turow.

Aaron Littmann, the chairman of one of the country’s most prestigious law firms, has just been contacted by a high-profile defense attorney, whose client is Nikolai Garkov, a Russian businessman arraigned on terrorism charges for pulling the financial strings behind recent treasonous acts. The attorney informs Aaron that Garkov is looking to switch representation and will pay one hundred thousand dollars just to take the meeting. But Aaron doesn’t have any choice, as Garkov is ready to go public with the damning evidence that Aaron and the judge in the high-profile case—Faith Nichols—had a torrid affair during another recent case.

WIN IT BEFORE YOU CAN BUY IT!

I grew up in East Brunswick, New Jersey, which is about an hour outside of New York City. I graduated from Brandeis University with a B.A. and M.A. in politics, and from there went directly on to law school at the University of Virginia.

After law school, I joined the litigation department of a large New York City law firm, and after a few more stops, am currently the head of the litigation department of Pavia & Harcourt LLP, which is located in midtown Manhattan. Pavia & Harcourt recently received some fame because it is the law firm where Supreme Court Justice Sonia Sotomayor practiced before she was appointed to the bench. WEBSITE

Giveaway Ends 4.13.15 and open to all who can legally enter.
US only – must be over 18 or have your parents permission to enter.
An email will be sent and you have 48 hours to reply or a new winner will be chosen.
Winner will be announced within 48 hours at the end of the giveaway. Giveaway is organized by Bookhounds and sponsored by me
It has no affiliation with Facebook, Twitter or any other entitiy.
Void where prohibited.