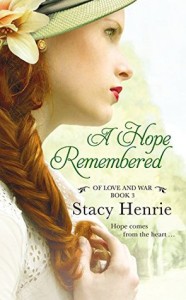 Nora Lewis just wants an escape after losing her fiance in the Great War. When she inherits property in England, she boldly packs up and leaves America for a fresh start. But, if not for her dashing new neighbor, Colin Ashby, she'd be lost. Even as their friendship deepens, Nora knows a British aristocrat would never be free to love an American orphan, no matter how much the war has changed the world ...

After his brother's death in the war and his own experiences as a pilot at the front, Colin returns home broken, only to discover his family's estate is also in ruin. The pressure is now on him to save his home and the Ashbys' place in society with a well-bred match to a wealthy heiress. Too bad he finds more of a kindred spirit in Nora, the beautiful American next door. She, too, has faced the rigors of war and survived. Now the ex-soldier will have one more battle to fight--this time for love

With a glare at both of them, Jack smashed his cap on his head and stalked from the room. He proceeded to slam the door behind him, but it hit the doorframe and bounced open instead.

Nora pushed out a sigh. “You didn’t have to be rude. Jack’s been very helpful to me this past week.” Maybe a bit too much. But she didn’t voice that thought. Colin needed no further ammunition against Jack.

“I’m sure he has,” Colin muttered, his expression as dark as his eyes.

Nora pinned him with a piercing look.

“You’re right.” He finished buttoning his cuffs and slipped on his vest. “That was ungentlemanly of me.”

She ignored his reference to her joke at their first meeting as she put away the corn starch and closed the cupboard. It was easier to keep her heart firmly locked if she held onto her disapproval of Colin’s behavior. Plus it would also stop her from wondering what he’d been about to say before Jack’s arrival.

“How may I redeem myself?” he asked as he pulled on his jacket. The amusement tugging at his mouth contradicted his contrite tone.

Nora folded her arms, contemplating a suitable penance. “I think your punishment needs to be two-fold.”

“Very well.” He nodded. “What is your sentence?”

“First, you must join me for choir rehearsal at the church tomorrow morning.”

The mirth drained from his face. “Nora.” His voice held a note of warning. “That is entirely—”

“Second, you and Perseus can give me a tour around the lake. I’ve already been here a week and haven’t even seen all of it.”

Colin scowled. “A walk around the lake would be acceptable. But the choir rehearsal . . .”

“Please, Colin.” She hazarded a step toward him, hoping he’d relent. “I sang with them last Sunday and they need more male voices.”

She had another reason for wanting him there. Everyone had been kind at rehearsal and at church the following day, but Nora still felt uncomfortable with the continued references to her likeness to Eleanor. Apparently their similarities also included their singing voices. With Colin at the rehearsals, she wouldn’t feel as awkward. She was beginning to think he was the only person in Larksbeck who hadn’t known Eleanor.

Colin’s brow knit in obvious annoyance, while Nora held her breath. Would he accept her proposal? Finally resignation settled over his countenance. “I’ll go, but only once.” He held up a single finger. “Once,” he repeated. “I make no promises after that.”

Grateful, she breached the remaining space between them and put her hand on his sleeve. “I agree to those terms.” She couldn’t hide her smile as she added, “Be careful, though, we might make a regular choir member out of you yet.”

Instead of the light laugh she expected, Colin solemnly watched her. Though he didn’t touch her, she felt as powerless to release his sleeve as if he’d detained her hand. She couldn’t step away—his nearness drew her in like the promising warmth of a fire after being out in a storm.

“You know,” he murmured, his voice low, “you are rather charming when you jest like that.”

Colin studied her lips as Jack had done last week, but this moment couldn’t be more different. A part of her, one growing more insistent by the second, actually wanted Colin to kiss her. How long had it been since she’d last felt the press of masculine lips against hers?

Not since before Tom left.

The memory crashed over her with all the effect of an ocean wave. She felt suddenly ill and cold. Releasing Colin’s sleeve, she stepped back, crossing her arms over her chest for warmth.

She’d done nothing wrong, but even entertaining the idea of Colin kissing her felt like a betrayal. Her heart could never belong to anyone else. And yet, in this moment, the past felt more like a burden than a boon.

“I’ll . . . uh . . . just get my sweater, then we can go on that walk.” Nora went to pull the garment off its usual peg. Her hands shook slightly as she slipped the sweater on over her blouse. “Ready?”

A flicker of emotion gleamed in Colin’s dark eyes. Was it disappointment? Frustration? Would he forgive her abruptness or understand the source of her pain? As quickly as it had come, though, the sentiment faded and Colin shot her a carefree grin. “After you, fair lady.” 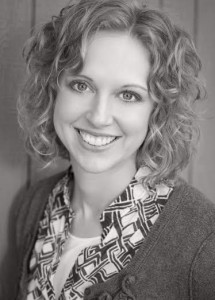 About Stacy Henrie:
Stacy Henrie has always had an avid appetite for history, fiction and chocolate. She earned her B.A. in public relations and worked in communications before turning her attentions to raising a family and writing inspirational historical romances. Wife of an entrepreneur husband and a stay-at-home mom to three, Stacy loves the chance to live out history through her fictional characters, while enjoying the modern conveniences of life in the 21st century. In addition to author, she is a reader, a road trip enthusiast and a novice interior decorator. Her first novel, Lady Outlaw, released from Harlequin Love Inspired Historical in 2012.
Stacy’s Social Media
Goodreads
Facebook
Pinterest
Website
@StacyHenrie