Time travel may be theoretically possible, but is beyond our current technological capabilities, say most scientists. Time travel, is defined as moving between different points in time. It has been and probably will be a popular topic for science fiction for decades. Franchises ranging from  “Star Trek” and my favorites, “Outlander” and “The time Machine” starring Rod Taylor have seen humans enter a vehicle of some sort and arrive in the past or future, ready to take on new adventures.

The reality, however, is more muddled. Not all scientists believe that time travel is possible. Some even say that traveling nearly the speed of light would be lethal. Dying from experimenting with time travel was also a possibility for my hero Doctor Alex Anderson, from my short story, “For the Love of Ginnie.”  This lovesick character, invented time serum, for the sole purpose of returning to the Civil War, and rescuing Ginnie, who according to history books, died from a snipers bullet.

While most people think of time as a constant, physicist Albert Einstein showed that time is an illusion; it is relative it can vary for different observers depending on your speed through space. Einstein called time the “fourth dimension,” which provides direction which only travels forward. Scientists describe space as a three-dimensional arena, which provides a traveler with length, width and height showing location.

Approaching the speed of light, a person inside a spaceship would age much slower than his twin at home. In addition, under Einstein’s theory of general relativity, gravity can bend time.

According to NASA, general relativity provides scenarios that could allow travelers to go back in time.

One possibility could be to go faster than light. (As in “beam me up Scotty”.)

Another theory would be to create “wormholes” between points in space-time. Most scientists though, believe wormholes would collapse very quickly and would only be suitable for very small particles.

Then there’s “Infinite Cylinder”, which is a mechanism where one would take matter that is 10 times the sun’s mass, and roll it into a very long but very dense cylinder.

According to the Anderson Institute, after spinning this up a few billion revolutions per minute, a spaceship following a very precise spiral around this cylinder could get itself on a “closed, time-like curve”. There are limitations with this method, however, including the fact that the cylinder needs to be infinitely long for this to work.

Another possibility would be to move a ship rapidly around a “black hole” that traveled around the speed of light, or too artificially create that condition with a huge, rotating structure.

Another theory for potential time travelers involves “cosmic strings”. Narrow tubes of energy stretched across the entire length of the universe. These thin regions, left over from the early cosmos, are predicted to contain huge amounts of mass and therefore could warp the space-time around them. Cosmic strings are either infinite or they are in loops, with no ends, scientists say. The approach of two such strings parallel to each other would bend space-time so vigorously and in such a particular configuration that might make time travel possible, in theory.

Also, it is generally understood that traveling forward or back in time would require a device a time machine to take you there.

To accomplish this, time machines are believed to need an exotic form of matter with so-called “negative energy density”. Such exotic matter has bizarre properties, including moving in the opposite direction of normal matter when pushed. Such matter could theoretically exist, but if it did, it might be present only in quantities too small for the construction of a time machine.

My curiosity for time travel led me to write “For the Love of Ginnie.” One story in my fantasy anthology, “Loves, Myths, and Monsters.”  My hero Dr. Alex Anderson, from the 30th Century, did not let time keep him from returning to the Civil War to find his soulmate, Ginnie Wade. When love is present, anything is possible. Happy Reading.

Blurbs for “Loves, Myths and Monsters” 11 tales of fantasy, intrigue, and mystery, entwined within the human world

Welcome To Anna-Little does 17 year old Zoe, realize, but the Chupracabra followed her to Ohio from South America. What happens next is a series of chilling mysteries, and unsuspecting friendships and love.

The Hunter’s Bride-When all game warden Daren Abram, had to worry about was which lucky lady to woo, he comes to the realization that his town is being stalked by the reincarnation of the town’s legend.

Moon People-For teenage mermaid Constance, coming to the quaint seaside town of Willowick, is heavenly, until she falls for mortal boy Drake. For the town to survive, Constance is forced to choose between her kind and the boy and town she loves.

The Pack-When young Lycan Sonny Red Blanket, a Shawnee Indian falls for mortal girl Drenda Way, he must save her from his fellow Lycan’s and stop a werewolf uprising.

The Bidding-Apiologist 34-year-old Duncan McPherson goes to Circleville, Ohio, to investigate a series of mysterious bee attacks. What is uncovered proves to be more dark and sinister then anyone imaged.

The Agreement-Incarcerated in the abandoned Roseville jail, is the last thing rich college student and speeder Brice Conrad, needs. With an “agreement” between the town and a permanent demonic “guest”, only the unfortunate ones know the truth, but do not live to tell.

For The Love Of Ginnie-Handsome bachelor and Scientist Alex Anderson from the thirtieth century, returns to the Civil War with time serum to save his beloved Ginnie Wade from a snipers bullet, while finding a roller coaster ride of joy and perils.

Is It Only A Myth?-When 32-year-old Vinton County Sheriff, James “Jim” Connors, discovers he has a Mothman hunting in his county, he stops at nothing to save his citizens.

The Proposition-The rough and ready cowboy John Queenie gets the shock of his life, when the ad to break a “wild filly” turns out to be a fiery Quaker girl named Tess. This is a story proving love conquers all.

The House On Shady Lane-A seemingly loving family turns out to be serial killers in 1873.

Love’s Curse-When an Egypt love curse scroll is stolen from a Dean’s office, persons begin dying in bizarre and grisly ways, with the college’s mascot a Viking King statue jokingly blamed for it.

Excerpt from “For The Love of Ginnie”

I shook hands with my first friend of the nineteenth century and left with renewed hope of saving Ginnie. Yet, sauntering along, I worried: How am I going to survive for the next thirty one days until July 3rd. I have no money I can use in this time period and no contacts in town. I have nothing. I don’t even know where I’m going to sleep tonight, let alone where my next meal is coming from.

Then, suddenly, abject terror stared me straight in the face—a Confederate soldier on horseback came charging headlong over the hill. Even worse, he saw me. A mountain of a man he was. His dark gray jacket adorned with yellow chevrons on the sleeves and collar. His jacket’s shiny gold buttons glittered from the last rays of the day’s sun. His light gray trousers decorated with a yellow strip down each side stood out against his black, knee-high leather boots. He and his chestnut mount were an impressive and terrifying sight, especially charging directly at me. He removed his saber from his belt, and held it high above him. Then with a blood-curdling scream, he jabbed his steel spurs into his steed and drove harder in my direction.

I turned and made a run for a clump of trees. As I ran, I heard the horse’s hooves pounding the hard ground and knew the soldier was closing in on me. I reached the walnut trees and hid behind the largest of the three. I soon realized I had no black powder or mini balls. Turning my musket upside down, I proposed to use it as a club. I wiped the sweat from my forehead and listened for the nearing sound of the horse’s hooves.

When I thought the time right, I jumped out and swung the musket, landing a solid hit on the side of the man’s head. The soldier flew off his mount backwards, landing on the ground, out cold. That was close! I thought. 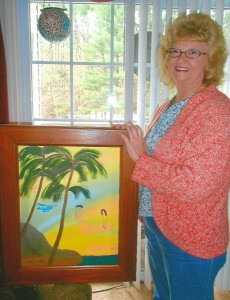 JoAnne lives in Ohio, and works in a nursing home. She is a cross genre author of 7 books and canvas paints. JoAnne believes in family values and following your dreams.

“Why Do People Murder?” by JoAnne Myers 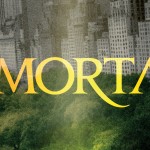