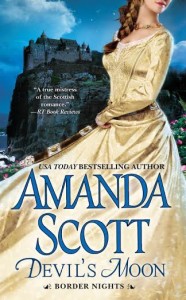 The last place Sir David "Devil" Ormiston expected his moonlight chase of a horse thief to end was in a lady's bedchamber. He is shocked to find that the raider he has pursued is no man, but a defiant beauty in disguise—and the woman he's vowed to protect at all costs. Face to face with a girl Dev thought he knew, the ever confident, marriage-resistant knight may learn that he is defenseless against the desirable woman she has become.

Lady Robina Gledstanes will do anything to keep her family's land out of the hands of her greedy kinsmen—except willingly submit to the handsome, cocksure Devil Ormiston. Dev's help may be just as dangerous as the threats lurking outside her castle. But when enemies scheme to steal the castle's treasure, Robina must risk losing something even more precious—her heart.

Watching Dev, Robina was grateful for his restraint. They reached the graveyard soon afterward and dismounted to look at the grave. She sensed Rab’s presence strongly as they stood there, but he kept silent, too.

“I think you have been pensive since I arrived, or longer,” he said. “Keeping secrets, or thinking about Rab?”

Uncertain how to reply, since the truth was unacceptable, she realized that silence was just as bad. Dev would surely suspect that she was keeping something from him.

She would have liked to tell him about the jar of coins, but Rab’s warning was sensible. And, in truth, whether Dev was currently master of Coklaw or not, the money belonged to Benjy, not to Dev.

The thought was disheartening, and she wished Rab would recall that he had trusted Dev. Confiding in him should be not only safe but sensible.

Rab, however, remained as silent as his grave.

“We should head back down,” she said with a sigh.

“Keeping secrets then,” Dev said grimly. “Don’t you trust me?”

“Oh, Dev, no, don’t think that,” she said, putting a hand to his arm, shocked that he had so nearly guessed her thoughts. “I know I’ve been a bit difficult, but—” Breaking off when he grinned, she said bluntly, “Do you think that was funny?”

He shook his head and bit his lower lip.

“Damnation, David Ormiston, do you dare to laugh at me now?”

“Nay, nay, I’m striving mightily not to laugh or to say what I’m thinking.”

“Just what were you thinking?”

“That when you refuse to tell me what you are thinking and then say that I’m mistaken to suspect a lack of trust, you make me want to kiss you one minute and put you over my knee the next. But, by heaven, if you swear at me again, I’ll—”

“I won’t swear,” she said hastily. “But neither will I tell you all I think. Some things are still private, sir, one’s thoughts especially so. But if you want to kiss me again,” she added, feeling suddenly and strangely shy but determined, “you may.”

“May I?” He raised his eyebrows. “I will admit that I enjoyed your kiss when we were here before. But others would say that I’d taken advantage of you.”

“They would be wrong,” Robina said. “I kissed you first. I wanted to know how it would feel, and now I want to know if it feels the same way whenever one kisses a man. I do trust you with my virtue, Dev.”

“Do you, Robby? You should not be so trusting. Sithee, I’m not certain I can trust myself. You’re a mighty tempting wench. But there are rules.”

“Aye, sure, I do,” he responded, pulling her roughly into his arms.

Uncertain now, but curious, she looked up and tried to gauge his mood. But he allowed her no time for that before his lips claimed hers, hot and demanding.

As he held her close, she heard him moan quietly in his throat.

Dev heard his moan, too, and realized that she had bewitched him. He wanted her in every way—other than marriage, of course, he reminded himself brutally. He suspected, though, that her invitation had just been an attempt to avoid answering his question about the secrets she was keeping from him.

The pliskie lass needed a lesson, and he needed release for his own emotions or whatever it was that enflamed his body, if only to show her the dangers of tormenting men … one man, at least.

Thrusting his tongue into her mouth and finding it hot inside and yet softly yielding, he pressed his lower body tightly against hers, letting her feel his desire.

She was too short, but a flat-topped boulder sat nearby. Without warning or sign, he lifted her to stand on it and did so without releasing her mouth.

For once in her life, she did not fight him but wrapped her arms around him and held him as tightly as he held her. 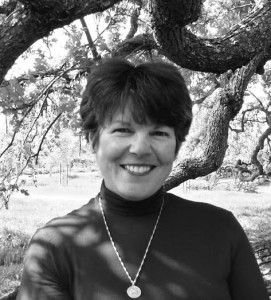 About Amanda Scott:
Amanda Scott is the author of over 62 romance novels and the recipient of the Romance Writers of America’s prestigious RITA Award.  She lives in Folsom, California, outside of Sacramento.  She is a fourth-generation Californian.
Amanda’s Website  & Facebook Page