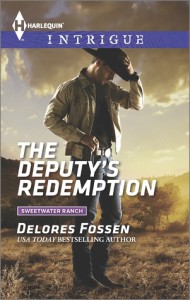 A Texas lawman risks his future to protect a woman from his past in USA TODAY bestselling author Delores Fossen's latest Sweetwater Ranch book.

The woman fleeing a cold-blooded killer is no stranger to Deputy Colt McKinnon. Fourteen years ago, Elise Nichols was the love of his life. Now she's back in Sweetwater Springs—to be the star witness in an upcoming murder trial that could tear the Texas lawman's family apart.

With her explosive revelations certain to rock the town, Elise didn't expect to be welcomed home with open arms. Certainly not by the cowboy with the badge who once meant everything to her. But after being run off the road and shot at, she has no choice but to trust him. Even more dangerous is the desire that's reigniting, making Elise yearn for something she may not live to see.

Texas author, Delores Fossen, wore combat boots. Yep. During her five year assignment at RAF Lakenheath, England, this former Air Force captain often wore not only combat boots but also full chemical gear during simulated attacks. In fact, that’s how she met her husband, Tom, an Air Force Top Gun. They were both in charcoal suits and gas masks, with every inch of their skin covered, and yet Tom asked her out anyway. Delores obviously said yes, and they eventually married. Delores often relies on her military background, world travels and zany life experiences when she writes historical romances for Dorchester and romantic suspense and comedies for Harlequin.

Giveaway Ends 3. 17.15 and open to all who can legally enter.
Open to US residents only – sorry, no po boxes
An email will be sent and you have 48 hours to reply or a new winner will be chosen.
Winner will be announced within 48 hours at the end of the giveaway. Giveaway is organized by Bookhounds and sponsored by CBS Films
It has no affiliation with Facebook, Twitter or any other entitiy.
Void where prohibited. 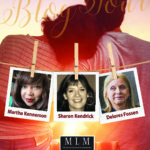 #Giveaway Bon Appétit and a Book LUCAS By Delores