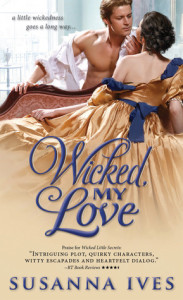 A smooth-talking rogue and a dowdy financial genius
Handsome, silver-tongued politician Lord Randall doesn't get along with his bank partner, the financially brilliant but hopelessly frumpish Isabella St. Vincent. Ever since she was his childhood nemesis, he's tried-and failed-to get the better of her.

Make a perfectly wicked combination
When both Randall's political career and their mutual bank interests are threatened by scandal, he has to admit he needs Isabella's help. They set off on a madcap scheme to set matters right. With her wits and his charm, what could possibly go wrong? Only a volatile mutual attraction that's catching them completely off guard...

Today we are pleased to have Susanna Ives join us for a round of Marry, Kiss or Kill! For this stop, we asked her to choose between Sean Connery, Roger Moore, and Pierce Brosnon:

“Sean Connery would say to me, “I don’t think there is anything particularly wrong in hitting a woman, though I don’t recommend you do it the same way that you hit a man.” And I would whack him.

Daniel Craig. I’ll marry him out of my profound love for intense, blonde men with British accents.  “

An Excerpt from Wicked, My Love:

She stationed herself by the window and scowled as if to say to the people looking in her window for vacant seats, Don’t get in this carriage. It’s occupied by a dangerous, sleep-deprived, hysterical woman who wants to be left alone. Stay away. Stay away. When the conductor’s whistle blew and the train started to rumble underneath her feet, she released her held breath and rested her head against the back of the seat.

Wham! The carriage door flew open and a brown leather bag went flying past her, hitting the opposite wall. Randall leaped in just as the train lurched forward.“Good morning, love.”

“W-what are you doing?” she cried, the great plan that she’d spent the night weaving suddenly torn to shreds. “You’re supposed to be getting your black heart shackled to some beautiful nincompoop.”

“You didn’t really think I was going to let you go alone?”

“No, of course not,” she stammered, feeling stupid. Why was she so terrible at understanding subtle meanings? She took everyone at their literal word. She should have known better from that slippery snake of a man. After all, he was a politician, and a good one, in a profession not renowned for its honesty and forthrightness.

“We’re lovers?” He shot her a sly glance. “Did you get me foxed out of my poor wits, take advantage of me in my defenseless state, and then not have the courtesy to tell me? Did I enjoy it?”

She refused to dignify that bit of lunacy with a direct answer. “Your mother, Judith, everyone thinks that I l-love you. Oh, my throat hurts for uttering such moronic nonsense.”

He extended his legs, cupped his hands behind his head, and let a charming smile laze on his lips. His blue coat molded to his lean, flat belly and the contour of his sex bulged in his brown trousers. “Naturally they think that,” he said. “What’s not to love?”

She averted her eyes, determined not to look at his male part. However, the generous, manly swell in the fabric was now emblazoned on her brain. “I really don’t have the time to discuss all the things that I don’t love about you. The list is quite long, and I’m a bit upset. I didn’t get any sleep, and now you are here to complicate everything. I just…just want to read.” She unfurled her journal and bowed her head, hoping he would take that as a cue to be quiet.

She gently rocked in her seat, as if it were a comforting cradle, trying to keep her curious eyes from roving back to his lap as she read and reread the first paragraph in an article about interest rates in the banks of Holland. She had almost made it to the second paragraph when she felt his shoulder rub against hers.

“Just relax,” he said, settling next to her. “We’re not lovers. I detest you as much as you detest me.”

“I don’t detest you,” she corrected. “I just don’t like you some—well, most of the time.”

“I certainly despise you, no question about that. Now that we have our mutual dislike for each other clarified, I think we should play a little game.”

She looked at him askew. “The our bank fails, we lose all our money, and our names and reputations are ruined game? I hear that it’s great fun until they cart us off to the poorhouse.”

“No, it’s the let’s-invent-false-identities-so-as-not-to-cast-suspicion game.” 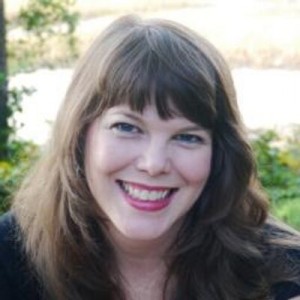 Susanna Ives started writing when she left her job as a multimedia training developer to stay home with her family. Now she keeps busy driving her children to various classes, writing books, and maintaining websites. She often follows her husband on business trips around Europe and blogs about the misadventures of touring with children. She lives in Atlanta. 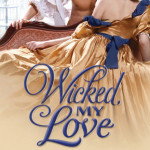