Welcome to my tour stop for A Tangle of Fates by Leslie Ann Moore. This tour runs Feb. 2-13 with reviews, interviews, guest post & excerpts. Check out the tour page for more information. 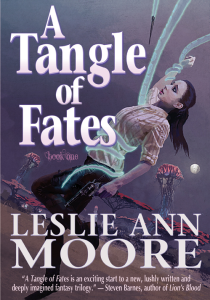 On Nuetierra, four hundred years have passed since the Great War. A new society has arisen on the ashes of the old.

Deanna Hernaan, daughter of Eduard, the former Alcalde of Nue Bayona, spends her days attending university and caring for her mentally damaged sister, Ceilia. Six years ago, her stepmother Lourdessa deposed her father, and now, as Alcalde, rules the city through patronage and oppression. Deanna remains apolitical, fearing Lourdessa’s power. Threatened by Deanna’s popularity with the common people, the Alcalde arranges for her assassination. Deanna survives, but is cast adrift in a hostile wilderness. She is rescued by a band of diminutive hunters—the Tiqui—members of a slave race she has only read about in history books. The hunters bring Deanna to their village, where she meets the Tiqui chieftess Yellow Bird. A remarkable woman, the ithani possesses the shamanic gift of foresight. Her visions have revealed to her that a young woman of the tall folk would come, one whose fate is inextricably entwined with that of the Tiqui—one who would bring disaster or salvation for all of Nuetierra.

Leslie Ann Moore was born in Los Angeles, California at the tail-end of the baby boom and fell in love with the works of Ray Bradbury, Arthur C. Clarke, Andre Norton, and J.R.R. Tolkien at an early age.

A practicing veterinarian since 1988, Leslie put her dreams of writing fiction aside until she attended the Los Angeles Times Festival of Books in 2000. There, bestselling fantasy author Terry Brooks told her, “Don’t ever give up. Keep writing, no matter what.” Those words changed her life.

What is on your nightstand?
A lamp, a box of tissues, a clock radio, a tube of Kiss My Face Organic Coconut-Pineapple lip balm, Buffy the Vampire Slayer Omnibus Vol. 1(Dark Horse Comics), Steampunk-An Anthology of Fantastically Rich and Strange Stories, Kelly Link & Gavin J. Grant, ed., Post Captain by Patrick O’Brien (a Capt. Jack Aubrey adventure), The Onion Presents-Our Dumb Century, and last but not least, my Nook, which has about 20 books on it, not very many when compared to my hard-copy book collection, which numbers in the 100’s.

What author would you totally fan girl?

Kate Elliot. Not only WOULD I go fangirl on her, I actually DID!! It happened at the 2009 World Science Fiction Convention in Anaheim, Ca.-home to Disneyland. It was my first World Con and my very first novel, the romantic fantasy “Griffin’s Daughter” was about to be released. I was very excited to be there and I had a bunch of cards printed up with the cover of my upcoming book and info about me that I was leaving at various spots around the con. It was close to noon, so I decided to take a break, grab some lunch and check out the vendor hall. I had a copy of Kate’s book “Prince of Dogs” with me to read while I was eating.

So there I was wandering the hall when I just happened to pass by a table and        saw, you guessed it, Kate Elliot! She was doing a signing and I came upon her purely by chance! I stopped dead in my tracks, and stood there gaping like a gaffed fish. After a few seconds, I managed to gasp “Oh. My. God. KATE!!!” I snatched the book out from under my arm, and proceeded to gush a continuous stream of adoration. Then, kid you not, I burst into tears. Yes, I did. Burst. Into. Tears.

Kate was wonderfully gracious, though she probably thought me quite mad. After I got hold of myself, I told her that I was a first-time novelist with a new book coming out. She happily took one of my cards, autographed my book and allowed me to have a photo with her. That picture is still up on my website. I’ll never forget that experience. I saw Kate again several years later at the World Fantasy Convention in San Diego. By then, I’d published two more books and won a major award for Griffin’s Daughter, so I was quite a bit more polished and professional. She remembered me-how could she not?- and we both laughed over my little fannish meltdown but in a fond way.

Kate’s writing style, along with that of another author I’d go totally fangirl on, Janny Wurts, greatly influenced me as a new writer and helped me to develop my own unique voice. I owe so much to both these ladies.

I’m probably one of the most pedantic people you’ll ever meet. I love the English language, and I love trivia. My head is chocked full of all sorts of factoids, some useful, some not so much. So, it really chaps my hide when writers don’t do their homework and use the wrong word for something or get a detail in the story factually wrong. It’s so easy to check a dictionary or thesaurus and with the entirety of human knowledge just a mouse-click away, there’s no excuse to put incorrect details in one’s book.

That, and the threatened return of 80’s fashion. I mean, stirrup pants? Really? Uh-uh.

Are you worried that your google history will get you into trouble?

No, because I paid to have it scrubbed and re-written. You can do that when you know the right people.

In other words, am I a plotter or a pantser-a writer who creates by the seat of their pants. I am most definitely a plotter, but that doesn’t mean I’m so inflexible that I can’t or won’t go with a new idea just because it’s not in the outline. I start out writing a quick, point by point summary of the plot. Next, I flesh out the summary into a very detailed outline, then transfer everything to a big day calendar. That way, I can see what each character is doing on any given day and keep all the various plot lines in perfect chronological order. I hate getting my timelines messed up. My system is pretty complex, and may seem like it leaves no room for organic changes, but because I can see the whole story in a day-by-day framework, it actually makes it easier to institute changes in a particular plot line that may ripple up or downstream and require changes in other plot lines.

Besides, being a pantser requires that you don’t mind spending three months working on something, only to find out you’ve got bupkis and have to throw it all out and start over from scratch. That can also happen to a plotter, but not nearly as often.