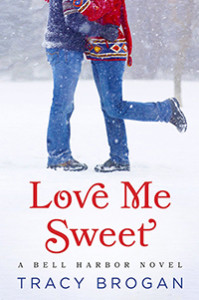 Yes, she has famous parents and a reality TV show, but she’s not the wild-child celebrity the paparazzi have painted her to be. Until…The Scandal. When an old boyfriend releases a private video, Delaney’s name becomes every comedian’s favorite punch line. To escape the media, she sneaks away to Bell Harbor, Michigan—during the worst winter in fifty years.

Adventure show cameraman Grant Connelly has stayed away from Bell Harbor—mostly by choice—but when a family obligation converges with a spontaneous career decision, it’s time to return home.

When bad weather, missing money, honky-tonk musicians, and Elvis impersonators throw Grant and Delaney together on an unexpected road trip, emotions get all shook up. They know only fools fall in love, but they can’t help falling. Still, Delaney has a secret that could tear them apart forever.

Can they weather the storm? Or will this romantic ride end at the Heartbreak Hotel? 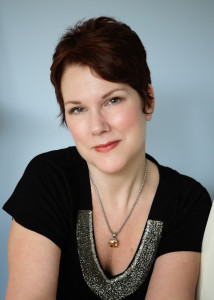 Tracy Brogan is an award-winning, bestselling novelist who writes fun and funny stories about ordinary people finding extraordinary love, and also lush historical romance full of royal intrigue, damsels causing distress, and the occasional man in a kilt. She has been nominated by Romance Writers of America for a prestigious RITA® Award for her debut novel, Crazy Little Thing, and was nominated by RWA for two Golden Heart Awards. She’s a Booksellers Best Award recipient, along with two Golden Quill Awards in both contemporary and historical romance. Unapologetically devoted to romance, Tracy lives in Michigan with her often-bemused husband, their gloriously above-average children, and their two intellectually challenged dogs. Tracy loves to hear from readers, so please visit her website at tracybrogan.com.

What gave you the idea for your newest release Love Me Sweet?

When I was writing my second Bell Harbor novel, The Best Medicine, the hero mentions his older brother Grant. He describes him as “kind of an ass” because Grant has essentially left the family and is off wandering the world. So when I was percolating ideas for a follow up book, I started toying with notion of an anti-hero. Someone who might not be instantly likable to the heroine. As in real life, the “ass” never thinks they’re the ass! So I worked hard to give Grant lots of plausible reasons for him having made the choices he made, and once he arrives back in Bell Harbor, he very quickly starts to see his past mistakes in a new light. He realizes he has hurt people, even though it was unintentional. His emotional growth is one of my favorite aspects of the story. By the end, he’s a brand new man, and a much better man for having met the heroine.

Your heroine is rich and famous – in fact, she even has her own reality TV show. Did you pattern her after a real life person?

Yes and no. I don’t watch reality TV so I had no one to really pattern her after, but I did think about what it might be like for an “average” person to the thrust into the limelight. In the case of Delaney, her dad is an 80’s rocker trying to make a come-back, and her mother was a supermodel, so she has lived her life on the fringe of celebrity but didn’t have much claim to it for herself. The spotlight focusing on her after a scandal catches her completely off-guard and is the impetus for her ending up in Bell Harbor.

On a fun note, I did chat a bit with bachelorette Molly Mesnick and she was a wonderful resource. She was on The Bachelorette the season the bachelor chose another woman, but he soon realized that Molly was actually the one for him. The media gave them a terrible time after that, but the great news is they’re now married and parents as well. They got their happily ever after!

Your heroine works as a cameraman in some very dangerous situations. Is he an adrenaline junkie? (I would imagine this helps with dealing with the ups and downs that comes with Delaney!)

He’s not an adrenaline junkie but he is definitely comfortable taking risks. He left Bell Harbor and his family behind when he was about 19 and never really looked back. But his goal was more about carving out a life for himself rather than escaping his past, or being selfish. Ironically, what drives him back home is his need to make his life have meaning. He finally realized it was time to start giving back and he wants his work to have a deeper purpose. He starts out as one of my most enigmatic heroes, but in the end, he’s really the most generous.

Readers just love characters on a road trip – nothing to do but get to know each other 🙂 What is the most surprising thing that Delaney and Grant learn about each other?

They end up in a situation where really all they have to rely on is each other. Neither of them is particularly prone to trusting strangers but they have to take the leap of faith and trust each other. It doesn’t take long for them to feel very connected, and quite dependent. But I think the part of this that surprises them is how easy it feels, and how much fun they are having together in spite of some pretty awful (and awfully funny!) circumstances.

If you had to pick the most romantic scene in the book, which would it be?

I hope the whole thing is romantic, and then funny, and then romantic again! But I think the most romantic scene occurs about two-thirds of the way through the story. Grant and Delaney have gotten, shall we say Biblically acquainted? Both have realized that whatever is between them is more than just a fling, but neither has admitted that to the other. They’re on a crowded dance floor and the scene is in Grant’s point of view. He’s thinking of how hard he’s fallen for her, and he knows he just has to kiss her. Right there, right then. And so he does.

What is the funniest line in the book?

Context is a big part of humor. A lot of the funniest bits take some building up to achieve the best result. So it’s hard to pick one funny line. Although I am partial to this one: “A man without his pants was a man willing to negotiate.”

Grant and Delaney face a snowstorm in one of the coldest parts in America. Do they have any advice for readers trying to keep warm this winter? 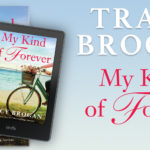 $25 #Giveaway The Risks (and Rewards) of Dating in