Blessed of the Gods

From the award-winning author of the Cornerstone Deep saga, comes a story of love, devotion and courage.

Chad Aumelan is in love, but his world isn’t right. Not when he’s forbidden to have Dae just because she’s his slave.

When Salana Goffin meets Chad, she’s faced with the unbelievable: a man who must take energy from a host to survive. He wants to find a cure to free the woman he loves. How can Salana turn away such a noble cause?

Together, they search for answers, but fate has another plan.

“Aumelan is much more than a love story. Ms. Wilson has crafted a masterpiece in which she closely examines the human condition: How far will we go as a society to survive? How far will we go as individuals for compassion? The literary genus is covertly wrapped in a delicious genre romance where readers are submerged in the lives of her characters and the fantastic sci-fi backdrop of their imperfect world. Make no mistake, Aumelan may easily become a classic to transcend time. A definite recommended read!” ~ J.D. Brown, author of Dark Heirloom series.

Styne’s thrill of adventure diminished as a howl reached into the narrow vein of the cave. He lifted his crystal-lit torch as if it would hush the mourning sound, but the light seemed to pulse with each beat of his heart. Gathering his nerve, he inched down the steep trail. Pebbles rolled beneath his feet, and he grasped at the granite wall to secure his balance.

A clash echoed through the catacomb, and he angled the beam down, squinting his eyes to see the bottom of the tunnel better. Water rose and then ebbed at the threshold, a tall stalagmite breaking the flow. His stomach knotted. No wonder the Chambers haven’t come to serve us yet. They must be scared to death.

Trotting down the pitch, he rode the gravel giving way to his quick pace. As he entered the hollow’s belly, waves crashed against the bluff. Bolts of light flashed beyond thick sheets of water like strobes. The fallout pounded onto the landing. Waves swept along the cave’s tongue and filled the gullies in a rush. Mats and crystals swirled with loose rock as the flow carried away the remnants from their earlier gathering.

He inched into the wide dome, gaze glued on the panoramic view. Awe locked logical thought as he scanned the vast World Above. Confusion passed his lips in a low mumble. “Chad said there would be stars, a moon…” It’s the real reason I agreed to come back down here and get the Chambers!

His steps slipped on the slick rock as he approached the open stage. He reached for the wet boulder at his side and braced his stand, digging his boot into the crevice at its base. Lifting his torch beyond the ledge of the ceiling, he drew it across the upper scope. The illumination from the crystal did nothing to penetrate the ominous cover. “What…what is this?”

Light shot across the horizon, and then a web of silent flares netted the expanse, highlighting the battle among the crests of the black sea. The sky turned musty gray as thick vapors morphed into engorged billows. Shock quaked his stomach as he tried to make sense of it all.

The heavens clashed, shaking the world around him. His heart jumped to his throat, and his arms flew over his head. A salty scent assaulted his nasal cavity as water clashed against the mountain. Thick sheets sprayed skyward and pelted him with heavy falls. He threw his hands out at his sides to keep balanced and then swiped his palm down his face.

The sky flashed white. Blinded, Styne shot his gaze toward the back of the cave, to the safety of the World Beneath the Rock. Fear held him rooted.

From the far left corner, a small light bobbed within the blob of white branded in his retinas. He scrubbed his eyes with the heels of his thumbs to clear his vision and then squinted in the same direction. Stafford waded through the waist-high current, his torch casting light across his pale face. The servant’s voice reached Styne in spasms. “Master Styne! They…taken! I tried… Great waters!”

Styne stepped toward him, an urgent command to halt on his tongue. His footing slipped. “Stafford, don’t… ”

Reaching the open cave, and free of the water, Stafford’s feet hit gravel. His long legs launched into a sprint. “Master Styne! They are gone!”

“Wait! It’s… ” Styne threw his hands out for balance and struggled to gain composure. “Don’t… ” Desperate to warn Stafford of the slick surface, his demand roared from deep in his chest. “Stop!”

Stafford jarred to a halt, his last stride slapping against the landing. His feet flew from under him, and his crystal torch clattered on the ground. The light flashed in his frantic eyes as he skidded past Styne, his master, his Keeper…the one entrusted to guide and keep him safe. Clawing at the wet surface, he disappeared over the ledge of the cliff.

He blinked and scrubbed his eyes with his palms. Another wave clashed into the bluff, and as it rose before the cave, a hungry howl moaned throughout the hollow.

Scrambling back into the depths, Styne swung himself past the stalagmite to the steep tunnel. Wild shadows danced around him as his torch revealed every frantic lunge up the rocky pitch. Flashes of the wild World Above swirled in his mind.

He fell against a boulder and squeezed his lids shut, heart pounding. Choppy breaths punched from his cheeks. His arms and legs shook, and he bunched his shirt with his fist to control the quakes in his stomach.

How could such a change take place in the short time they’d been in the upper chamber of the cave? The evening had been pure beauty, pink and orange ribbons trying to trap the sun as it descended beyond the horizon. Soft waves had lulled them as they sat around the crystal fire.

Shaking his head, Styne willed himself to master his actions. He filled his lungs with the familiar scent of sediment and focused on the safety around him. Fortification. Security. Control.

He opened his eyes to the reliable environment of the World Below. Silence rested on him. Soft light flowed from the crystal torch, illuminating the climb to his family camp. Lifting his chin, he set his resolve to maintain a dignified demeanor and reached to heave himself up the rocks. A cluster of crickets sprang from the ledge.

Shock rushed his edged nerves, and he threw his hand to the side. Stafford’s panicked face crossed his inner eye. Tremors returned. Sliding down the rough wall to the ground, he allowed the juts to graze his shoulder.

How could he not show strength during chaos for his server’s sake? He was frightened and I couldn’t warn him. What Keeper shows such weakness? He pressed his fists to his head and knotted his fingers in his hair. Irritation boiled in his gut as shame riddled his heart. Temper this! You’re not a child.

Clutching a fistful of gravel, he cast it at the wall to expel the guilt of his failure. What would his family think? They can’t see me like this. Not now. I’m to be a Father of the Nation. He shoved himself to a stand and then strode into the pass. I’ve got to gain control before I stand before Father.

Author Charlene A Wilson
Charlene A. Wilson is an author of tales that take you to other dimensions. She weaves magic, lasting love, and intrigue to immerse you into the lives of her characters.
She began writing in her early teens when her vivid dreams stayed with her long after she had them. The characters and worlds were so amazing she brought them to life through her books.
Charlene resides in a small community in Arkansas, USA, with her two beautiful daughters, husband, a cuddly Pekingese, and a very chatty cockatiel named Todder.

Oh my goodness! Of all the unexpected questions! I would have cleaned it if I knew I’d be asked something like that. Lol! Everything is on my nightstand, from tissues to rocksalt. (Well, you asked. Lol)

New shoes in an inch of mud….

4.       Are you worried that your google history will get you into trouble?

Everyone already knows how spacey I am. If they see my dingbat stories from the past, they’d just say, “Yeah, that’s the Charlene we’re looking for.”

I go with the flow or I’d be a case. I do obsess over details, but that comes later with revisions and edits…and galleys. 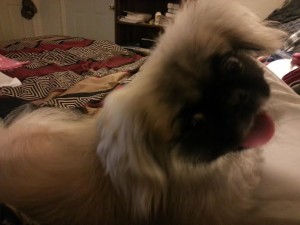 Now, that is a pose!