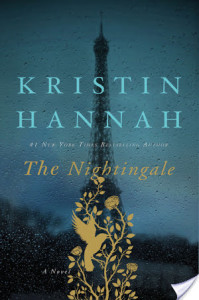 In the quiet village of Carriveau, Vianne Mauriac says goodbye to her husband, Antoine, as he heads for the Front. She doesn’t believe that the Nazis will invade France...but invade they do, in droves of marching soldiers, in caravans of trucks and tanks, in planes that fill the skies and drop bombs upon the innocent. When France is overrun, Vianne is forced to take an enemy into her house, and suddenly her every move is watched; her life and her child’s life is at constant risk. Without food or money or hope, as danger escalates around her, she must make one terrible choice after another.

Vianne’s sister, Isabelle, is a rebellious eighteen-year-old girl, searching for purpose with all the reckless passion of youth. While thousands of Parisians march into the unknown terrors of war, she meets the compelling and mysterious Gäetan, a partisan who believes the French can fight the Nazis from within France, and she falls in love as only the young can...completely. When he betrays her, Isabelle races headlong into danger and joins the Resistance, never looking back or giving a thought to the real--and deadly--consequences.

With courage, grace and powerful insight, bestselling author Kristin Hannah takes her talented pen to the epic panorama of WWII and illuminates an intimate part of history seldom seen: the women’s war. The Nightingale tells the stories of two sisters, separated by years and experience, by ideals, passion and circumstance, each embarking on her own dangerous path toward survival, love, and freedom in German-occupied, war-torn France--a heartbreakingly beautiful novel that celebrates the resilience of the human spirit and the durability of women. It is a novel for everyone, a novel for a lifetime.

Vianne kisses her husband goodbye when he leaves for the front and her sister, Isabelle runs off to join the fight on her own terms after her boyfriend betrays her.  Now, on her own, Vianne must deal with the enemy on her doorstep and is not given any choices about what she must do to survive and protect her children.  Each sister fights this war in their own way.  Isabelle must grow up quickly and does what she can to rescue airmen and get them to safety.  Because she is so young, she tends to take chances that if her luck would run out, she would be dead.  Vianne, on the other hand, is more mature and knows how to survive.

The story goes into detail, sometimes a bit more violent than I would expect from Hannah, but in keeping with the time period, there is no other way for this to be told.  The book ties in the start of the book’s narrator in 1995 to the ending in quite a nice twist.  Even though it does change pace from modern to historical viewpoints, the story stays constant.  The details about life in general at this time period are at time difficult to read, but so worth it.

Wow.  Kristin Hannah does it again!  This story about two sisters in France during World War II should come with 2 boxes of tissues.  I have always adored the emotional stories of Hannah but this one wrung me dry.  My husband’s uncle was one of the two worst things you could be during this war:  Jewish and French. He survived the war but barely.  My father fought in Germany and my mother used to tell me he woke up at night after horrible nightmares visibly shaking.  Hannah captures that horror and the humanity all within the pages of this book.

Kristin Hannah is the New York Times bestselling author of twenty-one novels, including the blockbuster Firefly Lane and #1 bestsellers Night Road and Home Front. She is a former lawyer turned writer and is the mother of one son. She lives in the Pacific Northwest and Hawaii with her husband.