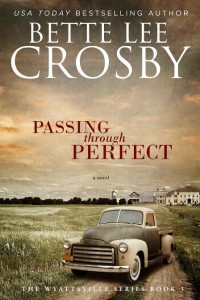 It’s 1946. The war is over. Millions of American soldiers are coming home and Benjamin Church is one of them. After four years of being away he thought things in Alabama would have changed, but they haven’t. Grinder’s Corner is as it’s always been—a hardscrabble burp in the road. It’s not much, but it’s home.

When Benjamin attends a harvest festival in Twin Pines, he catches sight of Delia. Before their first dance ends, he knows for certain she’s the one. They fall madly in love; happily, impatiently, imprudently, in love. It doesn’t matter that her daddy is staunchly opposed to the thought of his daughter marrying a cotton farmer, never mind a poor one.

It’s true Benjamin has little to offer; he’s a sharecropper who will spend his whole life sweating and slaving to do little more than put food on the table. But that’s how things are in Alabama. Benjamin is better off than most; he has a wife, a boy he adores, and a house that doesn’t leak rain. Yes, Benjamin considers himself a lucky man until the fateful night that changes everything.

“Passing Through Perfect is not the kind of novel that excels in pat answers, simple characters, and calm progressive events – and this is evident from the first paragraph, which opens with a punch and keeps on emotionally slugging… Southern fiction writing at its best: spiritually infused, warm, and family-oriented…” Midwest Book Review, Diane Donovan’s Shelf

“A heartwarming tale that shows both the good and bad found in mankind… Highly Recommended to those who enjoy historical fiction.” Inspired Kathy, I am a Reader

“Author Bette Lee Crosby’s characters take on heartbreak and oppression with dignity, courage, and a shaken but strong faith in a better tomorrow” Indie Reader

An uplifting story of family, love, kindness and hope, despite some people’s less than commendable behavior and attitudes.” Between the Lines

“When the heart of a man gets pulled loose he starts dying. I started dying a year ago, and I’m still working on it. I ain’t going all at once; I’m going piece by piece.”

“The sheriff recognized Benjamin. He’d done work for Missus Haledon, and he’d done a good job. He painted their back fence and repaired a broken window in the storage shed. He was blacker than most but known for being polite, unlike the smart-mouthed coloreds who lived on the far side of Bakerstown.”

“As he sat at the kitchen table and drank a glass of sweet tea with his daddy, her ghost slid in alongside of them. It was a sadness neither of them wanted to speak of.”

Award-winning novelist Bette Lee Crosby shares the storytelling charm of her Southern Mama in tales that are both heartrending and heartwarming. She is best known for her creation of characters that readers find unforgettable.

Passing through Perfect is Crosby’s tenth novel and the third book in the Wyattsville Series that began with the USA Today Bestseller Spare Change. Her work was first recognized in 2006 when she received The National League of American Pen Women Award for a then unpublished manuscript. Since then, she has gone on to win another twenty literary awards, including the Royal Palm Literary Award, the Reviewer’s Choice Award, the FPA President’s Book Award Gold Medal and the 2014 Reader’s Favorite Gold Medal.