2015 is all about minimalism, except when July rolls around. At that point it’s pretty safe to assume that this will be a moot point. But, for now . . . my nightstand is not cluttered with the usual loose change, scattered jewelry, and earplugs (snoring husband, need I say more?).  Instead, I have a pretty basket that holds two notebooks, a pen, and my Kindle. I love keeping notebooks nearby so I can jot down ideas when they come to me, usually when I am falling asleep. I also keep these notebooks nearby so I can write my morning pages. This technique was introduced to me by Julia Cameron, author of The Artist’s Way, and when I regularly write my morning pages, it helps me prep my mind for creative thought the rest of the day.

Are you worried that your google history will get you into trouble?

Oh, my goodness, absolutely! If I ever lost my computer or someone nabbed my phone, I would be in big trouble. Between searching for information on how to buy an illegal glock and texting myself to remember to hire the assassin, I wouldn’t blame the police if they made me a person of interest in any number of crimes. Thank goodness my books are my alibis, right?

Like nearly everyone else, I am reading Unbroken. It’s interesting. I’ve just started and so far I am intrigued, which surprises me because I am not big on non-fiction in large quantities. I prefer to get my dose of reality from magazines and news outlets, sticking with fiction when I read for pleasure.  However, prior to reading Unbroken, I finished Wild by Cheryl Strayed and loved the way she told her story. When non-fiction reads like fiction, I get hooked.

Hell, no! Oops – can I say that? While I may start out with the intention to create an outline, my brain rebels against organization. With my upcoming book, 60 Days, the story is complex and I wish I could have trained myself to plot out each point. It would have made writing much easier, and it probably wouldn’t have taken me months longer than intended to finish. In fact, I’m a couple months away from releasing the title and I still have bits and pieces that need to be added to the story. But, no, I go with the flow. I play out scenes in my head while taking a shower or driving a car and they aren’t always in a sequential manner. Usually, I will print out all these different scenes and then put them together like a puzzle. It’s not always pretty, but it works for me.

What author would you totally fan girl?

Khaled Hosseini, author of The Kite Runner, A Thousand Splendid Suns, and And the Moutains Echoed. He is someone who I would stand in line hours to meet, but would rather sit down to lunch and talk about his experiences and how they influence his novels. I love literary reads that have historical and political backgrounds, but tell stories through from perspective of ordinary people living in extraordinary conditions.

Piper Punches grew up in a rural Missouri town in the far west suburbs of St. Louis. As early as kindergarten, she began her adventure as a storyteller. It wasn’t long before others caught on that her talented storytelling was actually a disguise for her tendency to be a pathological liar. Luckily, by the time high school rolled around she got her act together and began to channel her bad girl tendencies into something constructive.

By the age of 16 she had written her novel, Silent Witness; a John Grisham- like tale about the treachery and brutality of the Colombian cartel. Before ever hitting the bookshelves, Silent Witness was adapted into a screenplay that was picked up by a major Hollywood studio, although not everything was it seemed. It was at this time that Piper learned the harsh lessons of Hollywood and the literary world. NEVER pay an agent one measly dollar until you have a contract in your hands and listen to your parents when they advise you against blindly sending $500 to a shady so-called agent to have your dreams come true overnight.  Sometimes parents actually know what they are talking about.

For the next several years (okay, about 20 years) Piper held onto her dream of becoming a published novelist, but decided to take up procrastination instead. It didn’t pay well, but it sure felt great to get nothing accomplished and pursue other random dreams. Finally, in 2012, after an eight year period as a social worker and a seven year stint as a business owner, Piper decided it was time to get back into the habit of storytelling . . . err, writing. She began freelancing and ghostwriting for several popular websites, while continuing to postpone writing her original work.

Piper’s mother had told her during her teenage years that writers write what they know. Of course, she didn’t take her mother’s advice back then and continued to write about drug cartels (because didn’t you know that every 16 year old living in rural Missouri knows about drug cartels? Meth – maybe. Colombia drug runners – no). However, in true Piper fashion, after 20 years she finally took that parental advice.

In late fall of 2013, Piper debuted her first novel as a bona fide adult. The Waiting Room is a novel that started as the title of a short story collection, but quickly proved it could be so much more. It evolved into a story about the complexities of family, the invisible bonds that connect people, and the pain that can reverberate through the choices we make.

In January 2014, Piper’s second published work, a novella entitled, Missing Girl, released. This short story proved to be a pivotal moment in her young career, where she found herself pointed in the direction of becoming the human interest writer she always longed to be. A story about sacrifice and bravery in the world of sexual slavery and trafficking, Missing Girl, albeit fictional, reaches deep into your soul and wakes you up to the injustices that are right under your nose.

Piper Punches lives 45 minutes from downtown St. Louis with her husband and two daughters. She continues to procrastinate and write on a daily basis and is excited to share her stories with new readers each and every day! Her newest novel, 60 Days, an extension of the story and themes of Missing Girl, will release in spring of 2015. 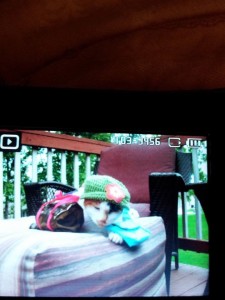 Here’s a photo of my cat, Lacee. She was a stray that showed up on our deck one night nearly three years ago. I told my daughter she could feed her if she came back. She came back and never left. This is the “love” she endures from my youngest daughter for food and a warm bed. 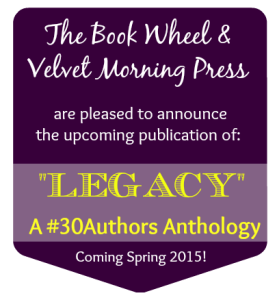 From the Book Wheel

I have very exciting news! September’s #30Authors event was such a success that I’ve teamed up with Velvet Morning Press to bring you the #30Authors anthology! Velvet Morning Press is the brainchild of two American authors living in Paris, Adria J. Cimino (an original #30Authors contributor) and Vicki Lesage. VMP takes a unique approach by investing in new authors who haven’t been picked up by a major agency but want the added professionalism that comes with having a publisher (learn more about them here). It’s very exciting and I’m honored to be a part of one of their early ventures.

So what is this anthology all about? Well, imagine a handful of authors locked in a castle for a month with one mission: to write a short story on the theme of legacy. Many of the authors participating are original #30Authors contributors and others are new or previously published authors you will be delighted to discover. Once the stories are complete, The Book Wheel, in collaboration with Velvet Morning Press, will publish the anthology “Legacy” in spring 2015. It will be available in print and ebook form. All author proceeds will benefit the charity Paws for Reading! Thank you, authors!

The writing process will be completely interactive with participating authors tweeting their writing experiences. Of course, it wouldn’t be a #30Authors event without the bloggers, so stay tuned for some amazing exclusive content from participating authors and bloggers throughout the event. You’ll be able to find out what inspires them, what their biggest challenge is, and how their writing is going. Be sure to follow the #30Authors hashtag on Twitter from Jan. 9 through the end of the month to find out – and don’t forget to tweet along with us!