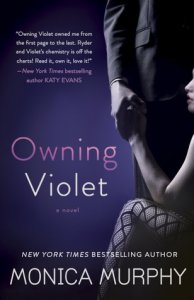 I’ve moved through life doing what’s expected of me. I’m the middle daughter, the dutiful daughter. The one who braved a vicious attack and survived. The one who devoted herself to her family’s business empire. The one who met an ambitious man and fell in love. We were going to run Fleur Cosmetics together, Zachary and I.

Until he got a promotion and left me in the dust. Maybe it’s for the best, between his disloyalty and his wandering eye. But another man was waiting for me. Wanting me. He too has an overwhelming thirst for success, just like Zachary—perhaps even more so. He’s also ruthless. And mysterious. I know nothing about Ryder McKay beyond that he makes me feel things I’ve never felt before.

One stolen moment, a kiss, a touch . . . and I’m hooked. Ryder’s like a powerful drug, and I’m an addict who doesn’t want to be cured. He tells me his intentions aren’t pure, and I believe him. For once, I don’t care. I’m willing to risk everything just to be with him. Including my heart. My soul.

My iPad mini which has my Kindle app which is full UP of an endless bunch of books. I buy way too many. I can’t help myself. Books are my drugs.

I have totally fan girled Jude Deveraux at the RT Convention in 2013. When I was young, I read her for the first time and I swear she changed my life. Rocked my world. Made me want to be a writer. So when I finally met her at RT, all I could say to her was, “I love you!” as she signed my book. I’m an idiot. LOL

When my kids fight! They don’t do it often, but when they do it’s cringe worthy. Ugh.

Oh my word, YES. I have Googled everything from how to poison someone to how long does it take to kill someone with your bare hands to kinky sex positions. I have a rather…varied Google history.

No, I can’t plot out every point, that would bore me to death. Plotting too much just doesn’t work for me (and that probably drives my editor crazy so I’m sending her my apologies right now). Takes all the fun out of it. I’ll outline the story, sort of like a map. I know I need to start at point A, get to points B, C, D until I finally get to E or whatever, but then I just let it flow. It’s a lot more interesting to me that way.