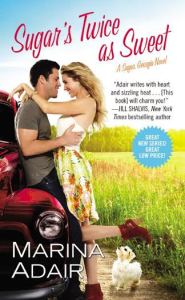 He's trouble she doesn't need . . .
Thanks to a cheating fiancé, Josephina Harrington's perfect life just crashed and burned. Moving in with her overbearing parents is definitely not an option. No, she needs to prove she can make it on her own. And she will-by turning her great-aunt's old plantation house into a destination getaway. She's just not expecting her contractor to be so hands-on-and so totally irresistible.

. . . but everything she wants
Bad-boy golf champion Brett McGraw figured his hometown of Sugar, Georgia was the perfect place to lay low and get his life back up to par. The leggy blonde with a pint-sized pup is the kind of sweet 'n sassy trouble he never saw coming. She doesn't know a nut from a bolt and before long, he's renovating her house . . . as she steals his heart. Can he convince Josephina that his womanizing ways are in the past and he's ready for forever?

For three weeks, she’d stared at the door, thinking this had to be some kind of mistake and that at any minute Wilson would walk in and everything would go back to the way it was supposed to be. Then, last night, while watching Under the Tuscan Sun and inhaling a red velvet cake, she realized that she didn’t want to go back to the way things were.

Even scarier, no matter how hard she tried, she couldn’t pinpoint the exact moment she’d lost balance in her life and in turn lost herself. Which was why she was moving out. It was clear that Wilson wasn’t coming back. And every moment she stayed there, in the place she thought she’d grow old and raise babies, the regret ratcheted tighter around her chest, until breathing hurt.

No, she needed to leave—and pronto. Problem was, the only place she had to go was her parents’ house, where the couture décor and upstate judgment would be equally suffocating, just in a different way. Even thinking about it gave her hives.

“Your mother pays me.” Rosalie narrowed her eyes. “She says to come here and help you. You say you need to move. So I fill boxes. What about this?” Rosalie held up an old shoebox covered in stickers and glitter and enough memories to make her heart jerk painfully. Then jerk again until it somehow landed in her throat, creating a whole new set of problems. Because there, in Rosalie’s pudgy hand, was a part of Josephina’s past that she hadn’t thought about in years.

“Where did you find that?” Josephina gently took the box and walked over to the couch.

She’d cried so much over the past few weeks, she assumed more tears would be impossible. Yet as she slipped open the lid and saw the photo resting atop a pile of letters and keepsakes, her eyes went blurry. This pain was different, as though it originated from someplace old and forgotten, and it packed the kind of power that made breathing almost impossible.

Josephina didn’t know how her life had spiraled so far from center, but she did know that she hadn’t felt as free as the girl smiling back at her in years. She picked up the photo and traced a finger over the rolled edge. It had been taken the summer she’d turned ten and her parents had gone on one of their trips to Europe, leaving her, once again, with her aunt.

It was one of the best summers of her life, spent making mud pies and learning from Letty how to

make real ones. Which was why she was standing on a wooden chair in pigtails, pearls, and a too-big apron, with flour down her front, a whisk in her hand, and a smile of sheer pleasure on her face.

If she closed her eyes she could almost smell the bite of lemons and hear Aunt Letty’s voice: “Careful, child. If you have to beat it that hard then you’re missing an ingredient. Might look perfect today but come morning that meringue will be a big pile of trouble, stinking up the fridge for days to come.”

Josephina placed the photo on the coffee table and carefully thumbed through the box. She dug past drawings and sketches—mostly in crayon and big swirly letters with hearts over the i’s—through magazine clippings and all of the ideas and dreams she and her aunt had cooked up for the old boardinghouse that Letty had called home, stopping when she found what she was looking for. At the bottom, postmarked six weeks before Letty had passed, sat a yellow envelope.

With a shaky breath Josephina opened the flap and pulled out the letter. The paper smelled like lilac and mothballs, and Josephina wanted to press it to her face and breathe in. A faded photo of Letty, standing on the front steps of Fairchild House in mud boots and a rain slicker, holding a jug of her finest moonshine, fell to the couch.

She remembered that last summer, sitting curled up in Letty’s arms while looking out the windows of the salon as a summer storm blew past and listening to Letty recount the story about how her great-great-aunt, Pearl Fairchild, came to call the magical boardinghouse home.

According to legend,  Letty had said, the two-story Plantation-style house was built in the mid-1800s by the first mayor of Sugar, Jeremiah Sugar. It was a masterpiece designed to win the heart of the beautiful socialite Pearl Fairchild, who, moved by his romantic overture and promises of a life filled with adventure, left her family and New York behind to become Mrs. Jeremiah Sugar.

Even the name sounded perfect. But after two months of travel, first in a train and later in a horse-drawn wagon, finally walking the remaining eight miles to the house, Pearl realized there was nothing sugary about her husband-to-be.

The man whom she had defied her parents for, had given her heart to, stood in the foyer. His slacks hung around his ankles, his face blotched red, while his pale backside engaged in rapid undulation under the housekeeper’s smock, so engaged that he failed to notice her enter the residence or even pick up his beloved mayoral gavel.

Pearl never took his last name, the mayor’s body was never found, and the housekeeper—prone to gossip—never had to work another day in her life, instead spending the rest of her days as Pearl’s handsomely paid companion.

Thus, the Fairchild House, boarding for the adventurous, was born.

Josephina turned the photo over and on the back, Letty had simply written: Come home, Fairy Bug. Your adventure is waiting for you.

Fairy, she remembered, clutching the photo to her heart to keep it from breaking, was because Letty swore Josephina was born to fly. The bug part was to remind her that sometimes she had to get dirty to really live.

And more than anything Josephina wanted to live again—really live. She tucked the photo into her pocket and looked at Rosalie. “I need a car.” 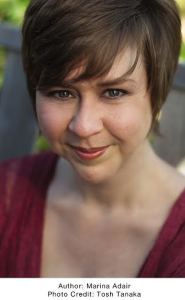 Marina Adair is a lifelong fan of romance novels. Along with the Sugar series, she is also the author of the St. Helena Vineyard series. She currently lives in a hundred-year-old log cabin, nestled in the majestic redwoods of the Santa Cruz Mountains, with her husband and daughter.

As a writer, Marina is devoted to giving her readers contemporary romance where the towns are small, the personalities large, and the romance explosive. She also loves to interact with readers and you can catch her on Twitter at @MarinaEAdair or visit her at www.MarinaAdair.com.

1. What is the first book you remember reading by yourself as a child?
Green Eggs and Ham by Dr. Seuss.

2. What are you reading right now?
I just picked up TAKEN BY TUESDAY by the wonderful Catherine Bybee.

3. What is the last thing you Googled?
“Sounds armadillos make”

4. What makes you cringe?
Teeth scraping on a metal utensil. I just shivered thinking about it. .