Can a battle-scarred warrior . . .

Stay sober. Get deployed. Lead his platoon. Those are the only things that matter to Sergeant First Class Reza Iaconelli. What he wants is for everyone to stay out of his way; what he gets is Captain Emily Lindberg telling him how to deal with his men. Fort Hood's newest shrink is smart as a whip and sexy as hell. She's also full of questions-about the army, its soldiers, and the agony etched on Reza's body and soul.

Emily has devoted her life to giving soldiers the care they need-and deserve. Little does she know that means facing down the fierce wall of muscle that is Sergeant Iaconelli like it's just another day at the office. When Reza agrees to help her understand what makes a soldier tick, she's thrilled. Too bad it doesn't help her unravel the sexy warrior in front of her who stokes her desire and touches a part of her she thought long dead. He's the man who thinks combat is the only escape from the demons that haunt him. The man who needs her most of all . . .

Reza felt Emily hesitate before she climbed the hill toward the MOUT site behind him. His gaze fell to his gloves on her hands, and an unexplained warmth spread somewhere in the vicinity of his belly as he watched her.

Now she was out at the range with him, wanting to know about the world he lived in.

A world he didn’t want her to know. The scars on his body were testament to the ragged ugliness of war.

She’d watched movies about combat. He’d led men in combat. Bled with them.

What on earth had possessed him to bring her out here?

He knew what it was and it pissed him off. If she was going to deploy, maybe something she learned today would save her life later. He hated to think of her in a bunker with rockets landing all around. His stomach twisted hard. He wouldn’t be there to keep her safe.

People like her simply didn’t recognize the world for what it was: a cruel, hard place that would crush the best of them. It was a world that required exactly what they were about to do: train.

If he couldn’t protect her, he could train her. At least a little. A little was better than nothing.

If she backed away from the shoot house, he wouldn’t let her go. She needed to do this, to see this in training where it was safe. No matter how much he wanted to protect her from the smoke and chaos of war—even a mock war like they were getting ready to wage today—the simple fact was she was going to deploy. Better to learn what she could here today rather than head to the desert with zero training. The threat of violence was a very real thing in his daily life and if she was going to deploy, she needed to understand that.

He watched her as she approached, careful to keep his expression neutral.

Part of him wanted her to run, to turn away from the violence of his life.

But another part of him, the dark part, wanted her to join him in the muck and the mire. That darkness held a powerful lure, a quiet shame mixed with the pride: he was good at what he did.

She flexed her hands in those gloves and his guts clenched. Down, boy.

“You ready for this?” he asked as she stopped next to him.

She peered up at him intently through her army-issued protective glasses. They were at least three sizes too big. “Is one ever really ready for something like this?” She didn’t look nervous but he heard the stress in her voice.

“Would it help you to know that I’m looking forward to this? This is the fun stuff I signed up for.” Not the killing parts. No, not those. But the force-on-force mock fights? That was the fun stuff.

“Hey, Sarn’t Ike, check this out!” One of his old lieutenants, Miller, ran up from the entrance to one of the blown-up windowless buildings of the mock city. He lifted his shirt, showing a brilliant purple and red welt on his side.

“That shit’s going to hurt like hell tomorrow,” Reza said with a low whistle. “Did the medics check you out?”

“I’m not fu— Nah, I’m good,” Miller said, stopping himself once he realized there was an officer present. “Ma’am.” He saluted and Emily returned the courtesy.

Reza almost shook his head at the sharp perfection of her salute. She obviously hadn’t learned the half-assed officer salute that so many officers passed off as real customs and courtesies. He watched her expression change from horror to pure curiosity.

“Some of the guys were screwing around, Ma’am. Doesn’t hurt that bad.” Miller had turned about as red as the bruise on his side.

“How did that happen?” she asked, peering closer.

Miller glanced at Reza for permission and Reza nodded. Unless he was mistaken, that bruise had come from an epic case of fucking around and he didn’t mind Emily hearing that. She needed to see the fun side of the guys in addition to the fucked up stuff inside their heads. Maybe if he could get her to see them as people, she’d stop thinking of them as victims.

“Couple of the guys cornered me. I let my guard down and well…there you have the results.”

Reza grinned, feeling the warm comfort of familiarity slip around him as Miller ran back toward his boys. This, Reza knew. This was the only thing that kept him from crawling back into the bottle. A chance to lead his boys again.

He wasn’t in charge today. No, that day was still a long way off. But he wanted—no, he needed—to be back with guys like Foster and Miller. With captains like Teague.

“Just follow me and stay close. It might get a little loud.” Reza watched as she tried to get her bearings over the sounds and the movement and the noise.

People who had never been to combat didn’t understand the chaos on the battlefield. It was oh so easy to second-guess the actions of the men and women on the ground when the videos captured everything, but in the thick of the fight? Yeah, it was never as easy as the video games and armchair quarterbacks made it seem. There was too much smoke, too much yelling, far too many people.

One wrong choice and the squeeze of the trigger ended a life. It might be fun, what they did in the shoot house, but that fun ended the minute they rolled with real rounds in the chamber.

“A little loud?” She was shouting. “I’m not sure it can get any louder.”

“If you’re still talking to me in a few months, I’ll take you out on an op in the tunnels. You want to talk about loud.”

“We do tunnel training because we never know when we have to go below the cities, or literally in tunnels.”

Her eyes widened slightly as though she was only just starting to grasp the variety of situations his boys faced. It was fascinating watching the scales fall from her eyes. She took everything in. Watched with a fascination that told him she wasn’t missing anything.

Her brows drew down in a slight frown. “What?” he asked.

“Nothing. You’re just…You’re different out here.” She tipped her chin at him. “More intense. You really do enjoy this stuff, don’t you?”

The strange feeling in his belly unfurled completely, spreading warmth wide through his blood. “There is nothing better than leading men in combat,” he said over the noise.

Nothing until he held that experience up next to the possibility of touching Emily again.

What would he give up for a few more minutes alone? To touch her the way he wanted, to feel her soften beneath his mouth and his fingers.

An explosion ripped through the noise and he ducked, more on instinct than anything else. When he looked over at her, her jaw had tightened in determination.

And Reza fell a little harder. 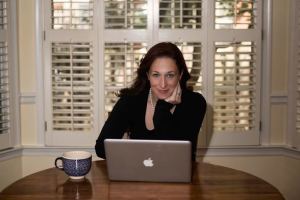 USA Today bestselling author Jessica Scott is a career army officer; mother of two daughters, three cats and three dogs; wife to a career NCO and wrangler of all things stuffed and fluffy. She is a terrible cook and even worse housekeeper, but she’s a pretty good shot with her assigned weapon. She’s currently pursuing a PhD in Sociology in her spare time and most recently, she’s been featured as one of Esquire Magazine’s Americans of the Year for 2012.

She’s written for the New York Times At War Blog, PBS Point of View: Regarding War Blog, and Iraq and Afghanistan Veterans of America. She deployed to Iraq in 2009 as part of Operation Iraqi Freedom/New Dawn and has served as a company commander at Fort Hood, Texas.
Social Media Links:
Website
Facebook
Twitter
Goodreads

1. What is the first book you remember reading by yourself as a child?
Fish is Fish. It was about a fish and a tadpole and the tadpole grows up into a frog and they have to figure out if they can still be friends.

2. What are you reading right now?
Emile Durkheim On Morality and Society

3. What is the last thing you Googled?
I really can’t share that, lol. Let’s put it this way, I’m glad I’ve got the excuse of being a writer to explain it if the NSA ever comes calling.