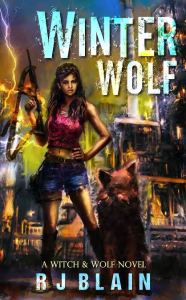 When Nicole dabbled in the occult, she lost it all: Her voice, her family, and her name. Now on the run from the Inquisition, she must prove to herself—and the world—that not all wizards are too dangerous to let live.

The savage murder of a bookstore employee throws Nicole into the middle of Inquisition business, like it or not. Driven by her inability to save the young man’s life, she decides to hunt the killer on her own. Using forbidden magic to investigate the past, she learns that the murderer is in fact a disease that could kill the entire werewolf race.

Forced to choose between saving lives and preserving her own, Nicole embraces the magic that sent her into exile. Without werewolves, the power of the Inquisition would dwindle, and she could live without being hunted.

But, if she fails to find a cure, her family—including her twin sister—will perish…

I slammed my car’s door, spun on a heel, and swore I would have a perfectly normal visit to the mall. All I needed was one little book. Even I could walk into a bookstore, pick up a novel, and leave without causing any trouble.

This time, I wouldn’t blow out the lights. There wouldn’t be a single power surge. I wouldn’t turn on every unplugged device in the electronics store on my way across the mall. In the ten minutes it would take me to get in and out, the only thing anyone would notice about me was the fact that I wore a high-collared sweater in late summer. I had a mission, and I would complete it without fail. The novel my agent insisted I read would be mine.

For a long moment, I considered turning around and getting back into my car. Dominic would forgive me if I didn’t start reading the book until tomorrow. I could call in a favor and ask someone to pick up a copy for me. Then I definitely wouldn’t run any risk of blowing anything up. If I had been smart, I would’ve just ordered the damned thing on the internet, but I had waited too long.

Fishing my cell out of my pocket, I unlocked the screen with a swipe of my finger. The charging icon mocked me. Despite running every battery-draining app I could find, the battery held a full charge. I opened another app, a devilish program capable of killing the battery in ten minutes. It wouldn’t, not with me around, but if I was too busy keeping my phone topped up, maybe my mall shopping trip would prove to be mundane.

I shook my head, laughing at my foolishness.

I had no reason to worry. Even if I managed to embarrass myself yet again by losing control of my powers, no one would know I was the cause of unplugged electronics turning on or unusual power surges.

Straightening my shoulders, I fixed my eyes on the line of glass doors and marched my way across the parking lot.

In and out. No blown lights. No power surges. No feeding power to unplugged electrical devices. No charging batteries for strangers. I was in control, and I would charge only my phone.

Making my way to the entry, I paused long enough to hold the door for a little old lady who insisted on making her way through the regular doors despite her walker. I couldn’t blame her. If I lived to be her age, I wouldn’t want to rely on automatic doors either.

She thanked me with a pat on the arm. Flashing her my best smile, I slipped inside.

I could handle ten minutes in the crowded corridors. Maybe if I told myself that enough times, I’d believe it.

RJ Blain suffers from a Moleskine journal obsession, a pen fixation, and a terrible tendency to pun without warning.

When she isn’t playing pretend, she likes to think she’s a cartographer and a sumi-e painter. In reality, she herds cats and a husband. She is currently on a quest for a new warrior fish.

In her spare time, she daydreams about being a spy. Should that fail, her contingency plan involves tying her best of enemies to spinning wheels and quoting James Bond villains until she is satisfied.

In no particular order: