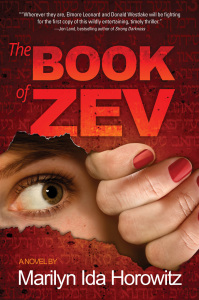 The Book of Zev is a black-comedy thriller that tells the story of two gentle people who change the course of history. Zev Bronfman, a strapping 32-year old-virgin, angry atheist, refugee from a religious Jewish life, and former engineer for the U.S. Patent Office in Alexandria, Virginia, drives a cab and sleeps around in New York City. After a bitter divorce, Sarah Hirshbaum, a beautiful, redheaded, depressed, God-hating kosher chef, seesaws between yoga and too much red wine. Independently, the two consult the same psychic who inadvertently sends Sarah Zev's session tape. When Sarah contacts Zev to pick up the cassette, he discovers that she has been recruited by the Mossad to play Mata Hari with the current president of Iran, Mahmoud Zarafshan, who believes he is the 12th Imam, and must instigate Armageddon in order to facilitate the Second Coming. It is up to Sarah and Zev to thwart his plans.

Click here to read an Excerpt of The Book of Zev 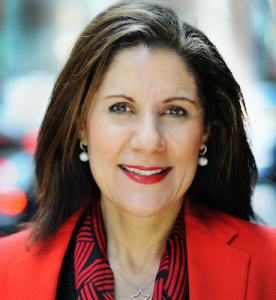 Marilyn Ida Horowitz is a producer, writing coach, and award-winning professor of screenwriting at New York University. From her books on her trademarked writing system—now standard reading at NYU—to her appearances at Screenwriters World and The Great American Screenwriting Conference & PitchFest, Marilyn has guided the careers of literally hundreds of writers. She is currently featured in the Now Write! Screenwriting Anthology (Tarcher/Penguin) and in the upcoming The Expert Success Solution (Morgan James). Her production credits include And Then Came Love (2007), starring Vanessa Williams.

Q: Who or what influenced you to write it?

I met a man on a train – a religious Jew who was having a crisis of faith. After a three-hour talk in the café car, I came home and started writing.

Q:  Do you obsessively plot out each point or just go with the flow?

I go with the flow, though I try to understand the consequences of the character’s choices before I begin.

Q:  Do you have a favorite author, book series, or book?

Arthur Conan Doyle. I am mad for Sherlock Holmes. Also Breakfast At Tiffany’s by Truman Capote, Play It As It Lays by Joan Didion, and The Great Gatsby by Fitzgerald. And many more!

Q:  What is a pet peeve or makes you cringe?

I am not of what context to answer: As a human being, cruelty of any kind. As a writer, long-winded descriptions and shallow characterizations.

Q: If you could have any accent from anywhere in the world, what would you choose and why?

Q: What type of music, if any, do you listen to while you write?

I created a Book Of Zev playlist on ITunes with 40 songs and often listened to that when I wrote. Sometimes I blast 9 Inch Nails, which forces me to concentrate.