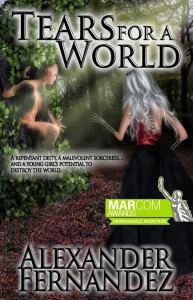 Tear for a World by Alexander Fernandez
The holy artifact bonded around Marisylia Malludar’s neck gives her incredible physical and magical powers—at a price. The bloody piece of vein is consuming Marisylia’s body inch by inch, her skeletal hands and feet only the beginning of a slow death. A cruel sorceress and her assassins are on the hunt for Marisylia to steal the artifact. Religious fanatics, volatile and unstable in their blind faith, also seek her to exploit the vein’s most dangerous purpose—liberating the erratic Creator of the World, Lysielle, from her 1,000 year incarceration. With the vein the key to Lysielle’s freedom, Marisylia must use her abilities to survive long enough to find Lysielle first. Then her most grim challenge awaits—deciding if the Creator has truly repented for attempting to destroy all life. To achieve global peace, Marisylia must discover faith in the unpredictable Lysielle or rely on her own instincts to set the world’s fate.

Excerpt:
Marisylia blinked and rubbed milk out of her eyes, but the mob wasn’t finished. A stiff hand shoved her from behind and she stumbled against the table. Unfinished slices of pie and rolls of bread pelted her.

With nowhere to hide, she dove into the horde and tried to shove her way out. Most of the people only yelled insults as they let her pass. Others bumped her roughly with their shoulders, tried to trip her, or pushed her around so she bounced back and forth between pairs of hands.

One woman caught Marisylia and carefully steadied her. She peered into the woman’s eyes, one friendly person amid the riled swarm. The lady smiled softly, then suddenly spit into Marisylia’s face.

When the saliva splattered her cheek, Marisylia stopped caring why the citizens acted like this. Whether due to fear of the religious power, worry that it would infest Three Fingers, or simply senseless anger, none of it mattered anymore since the time to quit had arrived.

All of her determination to succeed had been ripped to shreds by the crowd. Each hand that shoved, every object that struck, drained her enthusiasm. Her devotion to the religion had drowned in the woman’s spit. It was all too much. Marisylia didn’t have Milick’s iron skin or Shri Lilyn’s boldness. She had nothing, only the desire to run away and forget everything.

Praise:
“This is a fantastic story, and the various characters will blow you away. It’s one of the best reads I’ve had in a long while.” ~ Author Trana M. Simmons

Author Alexander Fernandez
Alexander Fernandez was born in Santa Monica, CA and grew up in Rancho Cucamonga. Currently serving over 20 years in the United States Air Force, he lives with his wife Helem in Rocklin, CA.
Alex has been writing fantasy stories since early childhood for both school and for pleasure. He hopes to make a lasting emotional impact in his readers. He thrives in the exhilaration of creating memorable characters and adventures that become a part of the reader’s life.