The publisher of the media / book has provided me with a review copy at no cost. Opinions are my own. Sealing the Deal by Sandy James
Published by Grand Central Publishing on 2014-11-04
Genres: Contemporary, Contemporary Women, Fiction, Romance
Pages: 320
Goodreads

After losing her sister, Bethany Rogers needs a shoulder to lean on more than ever-though she never expects that shoulder to belong to her new boss . . . Bethany has been in love with Robert Ashford since they were teachers at the same high school. After Robert leaves to start his own construction company, Beth puts her feelings aside to focus on her goals. When she finally lands a gig as a part-time designer, she is shocked to find her new boss is none other than Robert . . . and he's hotter than ever. But Bethany's happiness is short-lived when she receives word that her sister has been killed in combat. With the success of building homes for one happy family after another, Robert is finally ready to settle down. When Beth is left to care for her nine-month-old niece, Robert can't help but step in. And before long, the trio are inseparable. Yet convincing the cautious, bereaved Beth of letting him in proves difficult-but Robert will give everything he's got for the chance at his own happily ever after.Don't miss other titles in the Ladies Who Lunch Series!The Bottom Line, Book 1Signed, Sealed, Delivered, Book 2

I remember by elementary school I was ripping through the Nancy Drew series of mysteries. I also loved the Little House on the Prairie series. I’m sure there were earlier stories—especially Little Golden Books—but those two series leap out in my memory.

I just finished Hannah Howell’s six Wherelocke book, If He’s Daring. She is one of my favorite authors, and I tear through her books when they’re new. Now that I finished that book, I’m transfixed by Nora Robert’s third O’Dwyer story, Blood Magick. The first two were splendid stories!

Supermax prisons. Weird, right? I needed some research for the new romantic suspense book I’m writing. I imagine if I’m ever missing and law enforcement goes through my browser history, they will believe I was some sort of psychopath, considering the types of research I’ve done for my books over the years.

Predictable plots. Having been a writer for so many years, I find that I don’t enjoy many books or movies because I can often predict what will happen early on in the story. I love stories that take me by surprise! They are truly rare. 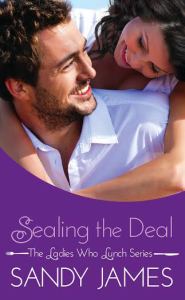 After losing her sister, Bethany Rogers needs a shoulder to lean on more than ever-though she never expects that shoulder to belong to her new boss . . . Bethany has been in love with Robert Ashford since they were teachers at the same high school. After Robert leaves to start his own construction company, Beth puts her feelings aside to focus on her goals. When she finally lands a gig as a part-time designer, she is shocked to find her new boss is none other than Robert . . . and he’s hotter than ever. But Bethany’s happiness is short-lived when she receives word that her sister has been killed in combat.With the success of building homes for one happy family after another, Robert is finally ready to settle down. When Beth is left to care for her nine-month-old niece, Robert can’t help but step in. And before long, the trio are inseparable. Yet convincing the cautious, bereaved Beth of letting him in proves difficult-but Robert will give everything he’s got for the chance at his own happily ever after.

“Why does everyone think I can’t raise Emma?”

She looked so damned forlorn. “Jules. My parents. You.”

With a shake of his head, he tried to set her straight. “First off, I have never—I repeat never—said you can’t raise Emma. In fact, I think you’re doing a fantastic job with her.” He glanced at the munchkin. “Look at her.” Emma smiled on cue, all tiny teeth and drool. “She’s doing really well with you. What did your parents say?”

Beth’s pouty lips strongly tempted him to kiss her again. “They told me it might be better to put her up for adoption.”

“Are you serious?” What kind of grandparents would say something so cruel? How could they even consider giving up their only grandchild?

“Dead serious. They made such a fuss over how much taking care of her while Tiffany was gone inconvenienced them. I was going to take her this summer, maybe even longer.”

What did a person say to something like that? “That’s cold.”

“I know, right? Besides that, my folks are really old-fashioned. They think a child should have both a mom and a dad.” A smile threatened. “I think Tiffany had Emma as a way to piss Mom off. Kind of her way of saying, ‘I’m a single mom. Take that, Carol.’ ”

“They’re wrong. You know they are.”

Although she glanced away, he saw the hurt in her eyes. “They’ve never really had a lot of confidence in me.”

Since his parents always encouraged their gaggle of children to reach for the stars and told them they all had the ability to do just that, he had a hard time picturing what it must have been like to grow up with parents like Beth’s. “Then they’re not too smart, ’cause you’re somebody who deserves their confidence. You’re amazing.”

Her gaze came back to his, but there was disbelief in her eyes.

“I mean it, B. Look at all you’ve done at school. Everyone admires you.”

She gave him a small snort.

One thing he’d have to do when they lived together was help give her more self-esteem. But he had to convince her to move into this house with him first. “What did our ever-tactful Jules have to say?”

“It was wrong to tell you she said I wasn’t good with Emma.”

“She didn’t say that?” Robert asked. He still stood in front of Beth, and now he held both her hands in his. It felt so natural. So right. Like two people in love sharing a conversation.

But Beth didn’t love him, and he was still pretty mixed up about how he felt about her. That was why he thought she and Emma moving in would be so great. He would have Emma in his life, and he and Beth would have time to share their lives, to see if the kisses and caresses led to—or away from—something special.

Beth shook her head. “She got weird when I asked if her nanny could watch Emma when I go back to work next week.”

“You’re going back so soon?”

This time, she nodded. “I’m out of paid time off.”

“Why not take a leave of absence?”

Her laugh was always so sweet to his ears. “ ’Cause I like to eat, and I imagine Emma does, too.”

“Didn’t Tiffany have life insurance? I thought all soldiers did.”

“I won’t touch that money. Not unless I absolutely have to. It’s a nest egg for Emma. She can pay for college and maybe even buy her first home with it.”

The response was pure Beth. Always putting others before herself. She was going to raise that baby on a teacher’s salary, a salary that seldom saw increases. She’d have her work cut out for her being a single mom who got paid diddly-squat.

“Well, then,” Robert said. “That seals the deal. You move in here. There’s one less expense.” She had to agree. She just had to.

“The hell you will!”

She jerked her hands free. “I’m not a charity case, Robert. Emma and I aren’t living in a homeless shelter or anything. I already told you Jules is looking for a house for us.”

Why had everything he said in this conversation come out wrong? After raking his fingers through his hair, he tried again. “B, p-please. Please move in with me. I want Emma here. I want you here.”

A man could only take so much provocation. Her belligerent frown that wouldn’t scare a fly. Her brown eyes that flashed with fire. The way she crossed her arms under her full breasts. Everything about her made him want to kiss her.

Robert grabbed her hand and tugged Beth into his arms. He stopped when his lips were almost touching hers. “Because of… this.” 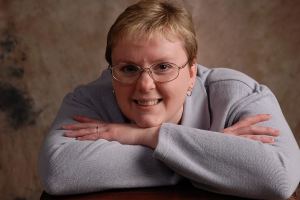 About the author:
Sandy James lives in a quiet suburb of Indianapolis with her husband. She’s a high school social studies teacher who especially loves psychology and United States history. Since she and her husband own a small stable of harness racehorses, they often spend time together at the two Indiana racetracks.
Social Media Links:
Website
Facebook
Twitter
Goodreads 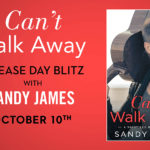