Bookhounds is excited to announce the new release from David Hair!

Scroll down for a chance to win my ARC! 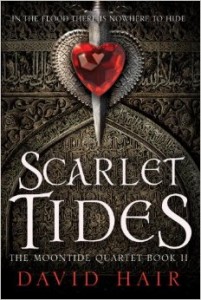 With the Leviathan Bridge now uncovered from the sea, it re-opens the East to the Rondian legions and the Third Crusade ensues in the name of Emperor Constant.

The Rondians are determined to succeed in their latest Crusade and have recruited the strongest and most lethal magi of the Church’s Inquisition to lead the way— and to leave nothing but blood and ruins in their wake.

While most of the Rondians have their sights set on gold, one fraction of the Inquisition is set on finding a more important treasure – the Scytale of Corneus.  As the source of all magical power, the Scytale is a sure game-changer, and it is imperative that the power-hungry and ruthless Rondians to keep it out of the hands of their enemies if they wish to maintain their growing empire.

Yet, as the Inquisition marches forward, conspiracy to overthrow the new emperor lurks in the shadows in both the East and West.

With the unlikely heroes of Alaron, a failed mage; Ramita, a lowly market maid; and Cymbellea, the daughter of a gypsy set on ending a world of war, SCARLET TIDES is an impressive world-building feat that proves that sometimes even weapons and magic cannot overcome the power of love and loyalty.

Click on the link below to read the first chapter:

Chapter One Excerpt of Scarlet Tides 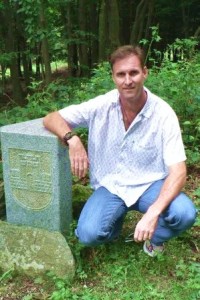 The Aotearoa Series is a YA series published by HarperCollins in New Zealand. The first novel, The Bone Tiki, won Best First Book at the 2010 NZ Post Children’s Book Awards. The series is built around the concept of two parallel New Zealands — the modern world, and another magical world peopled by legends, historical personages, and the ghosts of ordinary New Zealanders. There are six books in the series, which concluded in 2014 with Magic and Makutu.

Hair has also written a four book YA series, The Return of Ravana, set in India and published by Penguin India. The series tells the story of a group of people whose lives are linked by one tragic past life, the consequences of which resonate in every subsequent life, with horrific results. Book One, Pyre of Queens, won the LIANZA award for Best YA Novel in 2012. The series is set to be re-released in the UK in 2015 through Jo Fletcher Books.

SCARLET TIDES, to be published in October by Jo Fletcher Books (an imprint of Quercus), will be the second book in his fantasy series The Moontide Quartet. Four books are planned for the series, and a four book sequel series, The Lodestar Quartet, will follow.

“Hair’s novel swerves into J.K. Rowling territory, while in its mystical geography and anthropology, it often recalls Frank Herbert’s Dune novels…Hair is adept at character building as well as worlds, and his attention to his female players is welcome in a genre that too often excludes them.”

turning the pages until late into the night.”

Open to anyone with a US mailing address, PO Boxes OK!
Open only to those who can legally enter
Winning Entry will be verified prior to prize being awarded. No purchase necessary.
You must be 13 or older to enter .
The winner will be chosen by rafflecopter and announced here as well as emailed and will have 48 hours to respond or a new winner will be chosen.
This giveaway is in no way associated with Facebook, Twitter, Rafflecopter or any other entity unless otherwise specified.
The number of eligible entries received determines the odds of winning.
Giveaway was organized by BookHounds and sponsored by the publisher.