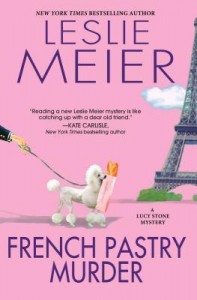 Tinker’s Cove is abuzz with excitement when Norah, the queen of daytime TV, comes to town and selects Lucy and her pals to be featured in her “Women Who Make a Difference” episode. In recognition for their charitable work, the ladies and their husbands are awarded a dream vacation in Paris, complete with classes at Le Cooking School with renowned pastry chef Larry Bruneau. But their bon voyage is cut short when Lucy discovers the chef in a pool of blood on the second day of class… If she’s going to enjoy her vacation, she’ll have to unpack her sleuthing skills and clear her name. But will she be able to track down a killer more elusive than the perfect macaron?

Leslie Meier lives in Harwich, Cape Cod, Massachusetts. She is the creator of ‘Lucy Stone’, a reporter and amateur sleuth in New England.

Lucy Stone’s daughter eldest daughter, Elizabeth received a promotion that included a new job in Paris.  She is having a rough time adjusting and Lucy is worried about her.  When a famous talk show host, much like Oprah, is prompted by one of her staffers to honor the Mittens and Hat committee of Tinker Cover, which Lucy is a founding member, she is overwhelmed and receives a trip to Paris and cooking lessons.  Of course, one of her friends’ daughter is the staffer so it isn’t that out of the blue.  It comes at a perfect time, just when Lucy needs to find out if Elizabeth is exaggerating her problems.  So the group of four women and their husband embark on the trip of a life time.  After settling in the apartment, the group starts with pastry lessons, learning the fine art of French cooking.

Sue, mother of said staffer and a bit of a braggart, was my first death wish for a character.  She became so annoying with her know-it-all attitude that I really wished she would have been silenced.  Rachel and Pam are fine back up characters, much like back up singers, they are necessarily visible at all times, but you would miss them if they were gone.  The mystery surround the stabbing of the chef giving the group lessons, which Lucy stumbles upon when she forgets her umbrella. She summons the police and is told by them the group can’t leave until the investigation is settled.  With not much else to do for two weeks, Lucy begins to ferret out clues, starting at her daughter’s work place which is hosting the former king of Egypt, the plot grows around a group of Elizabeth’s coworkers.

Meier does a great job of writing mysteries that keep your attention in a light and easy to read style. They are addicting like cream puffs, but without the weight gain.  I have tried to read all of her work and I think I am around seventeen books so far.  The best part of this series is that you can pick these up in any order and start anywhere. 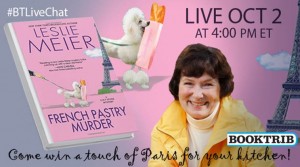 Open to anyone with a US mailing address,  sorry no PO Boxes
Open only to those who can legally enter
Winning Entry will be verified prior to prize being awarded. No purchase necessary.
You must be 13 or older to enter .
The winner will be chosen by rafflecopter and announced here as well as emailed and will have 48 hours to respond or a new winner will be chosen.
This giveaway is in no way associated with Facebook, Twitter, Rafflecopter or any other entity unless otherwise specified.
The number of eligible entries received determines the odds of winning.
Giveaway was organized by BookHounds and sponsored by the publisher.