Blanche’s pretty forehead puckered with a slight frown. “You don’t like Fox as much as he likes you, do you, Calliope? You’re not in love with him.”

Calliope silently scolded herself for having let her countenance and words reveal her secret to Blanche. The truth was that she was not as sweet on Fox Montrose as he was on her. Yet there were secrets in her heart that could never be revealed to anyone—not even to Blanche, not even to Calliope’s own sisters.

Therefore, she chose a counter maneuver with which to distract Blanche and said, “Oh, I adore Fox! I just think these things may take time, you know, for me to…to…”

“To really fall in love with him, you mean,” Blanche finished.

“Yes. Perhaps that is what I mean,” Calliope responded.

Yet as they neared the Montrose house, trepidation welled up in Calliope’s bosom, for she knew that if she hadn’t fallen in love with Fox Montrose by now, she never would. Furthermore, she didn’t want to.

A secret bliss was nestled deep inside Calliope Ipswich. It had been nestled there from nearly the moment the Ipswich family had arrived in Meadowlark Lake all those months past. And though it was a bliss she owned in knowing something about herself that even her own sisters did not know, it likewise brought her pain at times—for it was the very reason she knew she would never fall in love with Fox Montrose. Calliope’s love was already spoken for—and no one in all the wide world, save Calliope Ipswich herself, would ever know it. 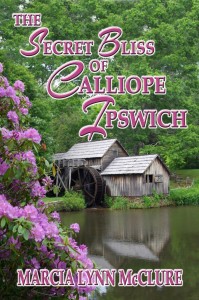 The Secret Bliss of Calliope Ipswich by Marcia Lynn McClure

“Oh! Do link arms with me, Calliope,” Blanche whispered, her brown eyes widening with apprehension. She took Calliope’s arm, tightly linking it with her own. “The old Mulholland house still gives me the willies every time I walk past it. I hate to think on what might have gone on inside. It’s truly terrifyin’!”
“Oh, don’t be silly, Blanche,” Calliope said, feigning calm. “Poor Prudence’s lunacy…it’s sad. And besides, her fiendish acts were not committed inside the house. There’s nothing wrong with it. It’s just…it’s just a sad, empty building.” Calliope Ipswich felt the hypocrite, however, as an uncomfortable shiver of residual dread and unease shuttered down her spine,

More than six months had passed since the All Hollow’s Eve when the dangerous state of Prudence Mulholland’s fracturing mind had been revealed to the townsfolk of Meadowlark Lake. And now, each time Calliope thought of poor Prudence and her family, not only did her heart ache for their family’s unhappy lot but a chill of lingering horror rippled through her being.
In truth, at times Calliope wondered if it had all been simply a bad dream—a nightmare. But it hadn’t. It really had happened—all of it. 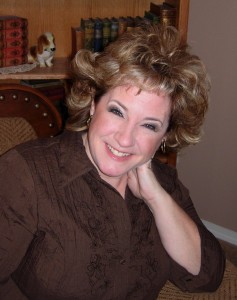 Marcia Lynn McClure’s intoxicating succession of novels, novellas, and e-books, has established her as one of the most favored and engaging authors of true romance. Her unprecedented forte in weaving captivating stories of western, medieval, regency, and contemporary amour void of brusque intimacy has earned her the title “The Queen of Kissing.”

Marcia, who was born in Albuquerque, New Mexico, has spent her life intrigued with people, history, love, and romance. A wife, mother, grandmother, family historian, poet, and author, Marcia Lynn McClure spins her tales of splendor for the sake of offering respite through the beauty, mirth, and delight of a worthwhile and wonderful story.