Paranormal Suspense with a dash of Sci-Fi 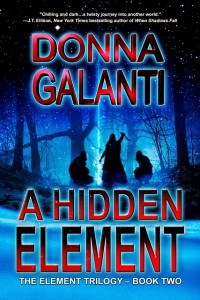 Enter A HIDDEN ELEMENT Release Giveaway here or below to win books, $100 Amazon gift card, movies and more!
A HIDDEN ELEMENT EXCERPT
Caleb walked down the open corridor to the prisoner’s room. He hesitated at the door, unlocked it, and pushed it open with conviction. She sat on the concrete floor, naked and small,
knees drawn to her chest. Her golden brown hair flowed around her, strands of pure bronze covering her in light. She looked up, eyes wide with fear. Tears dropped like clear pearls from her emerald eyes. Eyes he had looked into with desire and yearning long ago.
“Caleb,” she whispered. “Help me.”
“My father says you must pay for your desertion.”
She put her head on her knees.
“What will happen to all of my children? I wanted them to know I was their mother. I wanted to save all of them, but I could only take two. They were my first and I always knew they were mine.”
Like I know they are mine, he wanted to say. Instead, he narrowed his eyes at her and walled himself off from her plea. “They aren’t your children. They belong to the community.”
“Mine.”
“Not according to my father.”

ABOUT A HIDDEN
ELEMENT: Evil lurks
within…

When Caleb Madroc is used against his will as part of his father’s plan to
breed a secret community and infiltrate society with their unique powers, he
vows to save his oppressed people and the two children kept from him. Seven
years later, Laura and Ben Fieldstone’s son is abducted, and they are forced to
trust a madman’s son who puts his life on the line to save them all. The
enemy’s desire to own them—or destroy them—leads to a survival showdown. Laura
and Ben must risk everything to defeat a new nemesis that wants to rule the
world with their son, and Caleb may be their only hope—if he survives. But must
he sacrifice what he most desires to do so?

“Will keep you up long past your bedtime...a
pulse-pounding read.“—Allan
Leverone, New York Times and
USA Today bestselling author of Final Vector
ABOUT DONNA: Donna Galanti
writes murder and mystery with a dash of steam as well as middle grade
adventure fiction. She is an International Thriller Writers Debut Author of the
paranormal suspense novel A Human Element, A
Hidden Element (August 2014), the short story collection The Dark Inside, and Joshua and The Lightning Road (Books 1
and 2, 2015). She’s lived from England as a child, to Hawaii as a U.S. Navy
photographer. She now lives in Pennsylvania with her family in an old
farmhouse. It has lots of writing nooks, fireplaces, and stink bugs, but she’s
still wishing for a castle again—preferably with ghosts.
Website: www.ElementTrilogy.com

Purchase Book 1 in the Element Trilogy, A
Human Element: