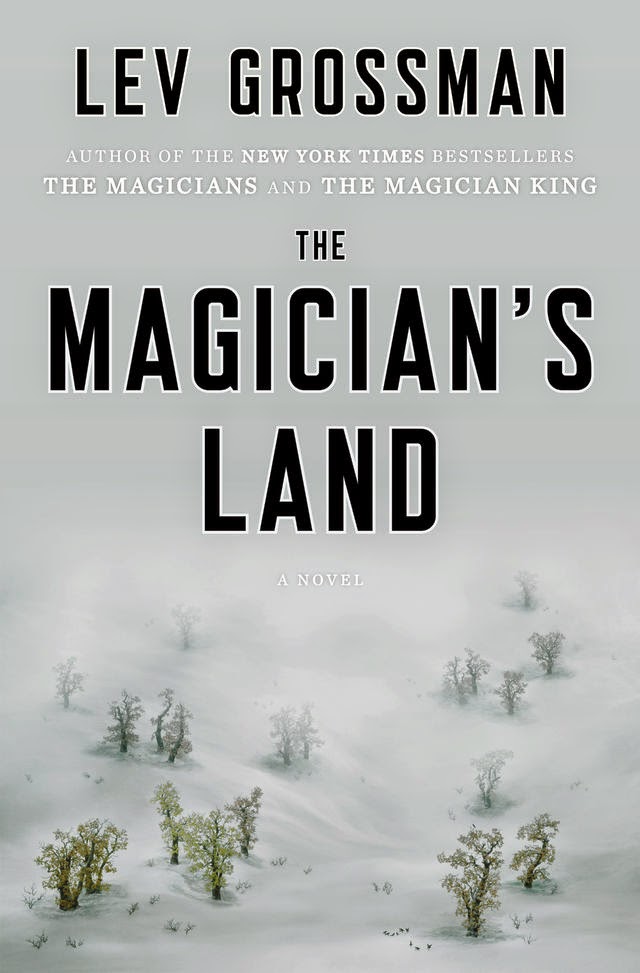 Julia’s Review
If The Magicians is an adult riff on Harry Potter, and The Magician King is Lev Grossman’s take on a classic Narnian quest, then The Magician’s Land truly defies expectations. While reading The Magician’s Land, it becomes apparent how not only Quentin Coldwater, our now-30 emotionally grown main character, has matured, but also how the writing skills of Grossman have matured. Completing Quentin’s story in The Magician’s Land, Grossman not only takes a strong stance in challenging what exactly a fantasy novel can discuss– creating a complex, magical, and modern bildungsroman—but also explores Quentin’s growth and actualization by finally opening up the narrative and creating a thick, suspenseful plot using a host of characters and their points of view.
In what is probably the best aspect of the novel, Grossman flexes his now well-practiced perspective writing in The Magician’s Land by constantly passing the point of view, and creates a more interesting read because of it. Reading through the perspectives of characters previously only seen through Quentin is fresh, showing much more of Grossman’s examinations of magic and mental health, and goes a long way towards showing exactly what it means for Quentin to have grown up. Janet’s story of what she did in The Magician King in particular is chilling and terrifying and absolutely too true to her, satisfyingly showing the strength of her character, but the new character, Plum, has her own secrets, trauma, and growth that stand as a gratifying counter to Quentin.
Starting a little rocky with Grossman juggling an extended flashback through multiple perspectives on Quentin’s time as Brakebills faculty, along with a plot involving the apocalypse of Fillory and the former Physical Kids, it comes off as questionable about how everything comes together, or matters at all. But as the book progresses, especially by the end of Quentin’s stint at Brakebills, all Grossman’s tricks become apparent as he skillfully dodges expectations and tropes, and through the twists and turns within this seeming maze of a novel, the pay-off is huge.
Once again Lev Grossman has shown the pains and realities of growing up and living a fantasy, but this time shows the utter joy of magic—watch for the fantastic scene built on the question “Why not turn into whales?”— as well as the fulfillment of growing up, leaving The Magicians Trilogy with a capstone that will satisfy fans and skeptics of the series exactly how they need it.
About the Book

The stunning conclusion to the New York Times bestselling Magicians trilogy
Quentin Coldwater has lost everything. He has been cast out of Fillory, the secret magical land of his childhood dreams that he once ruled. Everything he had fought so hard for, not to mention his closest friends, is sealed away in a land Quentin may never again visit. With nothing left to lose he returns to where his story began, the Brakebills Preparatory College of Magic. But he can’t hide from his past, and it’s not long before it comes looking for him. Meanwhile, the magical barriers that keep Fillory safe are failing, and barbarians from the north have invaded. Eliot and Janet, the rulers of Fillory, embark on a final quest to save their beloved world, only to discover a situation far more complex—and far more dire—than anyone had envisioned.Along with Plum, a brilliant young magician with a dark secret of her own, Quentin sets out on a crooked path through a magical demimonde of gray magic and desperate characters. His new life takes him back to old haunts, like Antarctica and the Neitherlands, and old friends he thought were lost forever. He uncovers buried secrets and hidden evils and ultimately the key to a sorcerous masterwork, a spell that could create a magical utopia. But all roads lead back to Fillory, where Quentin must face his fears and put things right or die trying.The Magician’s Land is an intricate and fantastical thriller, and an epic of love and redemption that brings the Magicians trilogy to a magnificent conclusion, confirming it as one of the great achievements in modern fantasy. It’s the story of a boy becoming a man, an apprentice becoming a master, and a broken land finally becoming whole.
About the Author

Lev Grossman is the book reviewer for Time magazine. In 2011 Grossman won the John W. Campbell Memorial Award for Best New Writer from the World Science Fiction Society. A graduate of Harvard and Yale, he lives in Brooklyn with his wife and three children.

Disclosure  I received this book from the publisher at no charge and in no way influenced my review.  If you are considering purchasing this book or anything else from Amazon, please use my link above since I earn a very small percentage of the sale which helps pay for shipping my giveaways!  You can also support the blog by clicking on the ads at the top of the page.