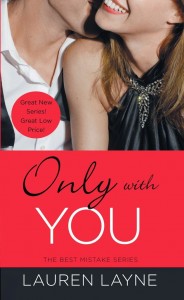 About ONLY WITH YOU
Getting mistaken for a prostitute is not part of Sophie Dalton’s life plan. Not that Sophie even has a life plan. She’s perfectly happy being everyone’s favorite party girl. But then a Las Vegas bachelorette party goes awry, and an uptight businessman gives Sophie a new label: hooker.

Unfortunately, what happens in Vegas doesn’t always stay there. When the same jerk who mistook her for a prostitute shows up as Sophie’s new boss and her perfect sister’s new boyfriend, Sophie’s carefree existence is turned upside down. Grayson Wyatt may have infiltrated family dinners and her professional world, but Sophie’s not about to let a judgmental prude anywhere near her personal life.

As Gray’s icy stares give way to quiet smiles, Sophie realizes that the one man she’s been so desperate to get away from just might be the one she wants to keep around forever.

Amazon
B&N
iTunes
BAM!
Indiebound
EXCERPT
Gray cleared his throat roughly. “Ms. Dalton, it doesn’t sound like a career in hotel hospitality holds much interest for you, but I’d be happy to discuss the possibility of employment with you should you change your mind.”
Sophie was so startled to hear Gray addressing her directly that it took a few moments for the actual words to sink in. She stared at him. “You want me to come work for you?”
His wince said it all. No.
“If you would like,” he replied, giving her an intent look with a hidden message.
Ah. There it was. He wanted her to get them out of this mess so he could save face. Here the perfect CEO was,
throwing a bone at the pathetic, loser sister.
And his expression made it clear that as the poor loser sister, Sophie was supposed to do what her family was expecting her to do: refuse the responsible option.
For once, they were in agreement. Refusal had been on the tip of her tongue from the moment she’d realized where Brynn was going with her well-meaning interference. The whole point of quitting Stump’s was to regain some self-respect. And working for a man who despised her was not the path to emotional validation.
Except . . .
“I accept,” she heard herself say.
Five pairs of startled eyes stared at her. Even Brynn looked surprised, and she was the one who’d engineered this whole disaster.

“Are you sure, Soph?” Will asked, looking uncharacteristically
somber.
Not at all.
“Mr. Wyatt here offered me a great opportunity,” she said with a calm she didn’t feel. “As my parents so gently pointed out, I’d be a fool not to take it.”
She met Gray’s eyes as she said this, and the stormy disbelief she read there made her realize exactly why she’d done it.
Revenge. 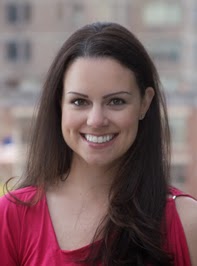 After dabbling in an e-commerce career in Seattle and Southern California, Lauren moved to New York City where she now writes full time.

Lauren graduated from Santa Clara University with B.S. in Political Science that she has yet to put to good use. She lives with her husband and plus-sized pomeranian in a tiny Manhattan studio.