Feast your eyes on this epic creepy cover for A HUMAN ELEMENT – book 1 in Donna Galanti’s Element Trilogy! This paranormal suspense officially hits shelves July 28th! Get your dark on with murder and mystery with a dash of steam. 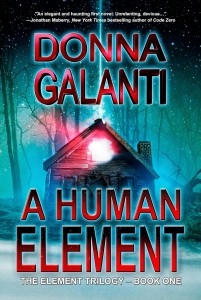 PLUS there’s more feasting to be done with this awesome giveaway jam-packed with prizes! Enter A HUMAN ELEMENT Release Giveaway now!

Felix ran from the cabin toward the trail down. “Come on!”

Ben followed close behind, panic hitting him. Why did Laura leave? They were here to help defend her. Damn her! He never should have left her alone.

“Felix, why didn’t you see this happening?”

Ben grabbed the back of Felix’s coat and lunged at him. Felix turned on one heel and swung his arm out, holding Ben off like a child.

Ben struggled to break free. “What the hell is wrong with you? Why didn’t you stop her? She’s gonna die. I need to protect her.”

“She’s the one person I’ve cared about in a long, long time. Please, don’t let her die.”

Felix released him. “I don’t intend to. Now come on.”

Felix turned away and ran fast down the trail. His massive body moved nimble over the rugged ground. He looked like a giant, dark beast lunging toward its prey. Ben could only run after him. There was nothing else he could do.

They hadn’t run far when a deafening blast pushed them to the ground. The cabin exploded behind them in flames. Fire devoured old wood and metal, dancing upward toward the sky. The heat grabbed at them with fiery intensity. Ben could feel it burning his face and hands.

“Laura,” he whispered, stunned by the violence aimed at them. Their enemy was real. And he was here. Felix and Ben turned and both ran faster down the mountain, lunging down the trail, grabbing branches to push themselves along.

Felix had to be right. Please, let Felix be right.

ABOUT A HUMAN ELEMENT:

Evil comes in many forms…

One by one, Laura Armstrong’s friends and adoptive family members are being murdered, and despite her unique healing powers, she can do nothing to stop it. The savage killer haunts her dreams, tormenting her with the promise that she is next.

Determined to find the killer, she follows her visions to the site of a crashed meteorite in her hometown. There, she meets Ben Fieldstone, who seeks answers about his parents’ death the night the meteorite struck. In a race to stop a madman, they unravel a frightening secret that binds them together.

But the killer’s desire to destroy Laura face-to-face leads to a showdown that puts Laura and Ben’s emotional relationship and Laura’s pure spirit to the test. With the killer closing in, Laura discovers her destiny is linked to his, and she has two choices—redeem him or kill him.

**Get your evil on with this re-release by Imajin Books! Newly edited, new scenes, new cover!**

PRAISE FOR A HUMAN ELEMENT:

“Be afraid. Be very afraid. And be utterly absorbed by this riveting debut that had me reading till the wee hours of the night. A thriller star is born. Don’t miss A Human Element.” —M.J. Rose, International bestselling author of The Collector of Dying Breaths

“Lyrical and creepy, Donna Galanti’s A Human Element tugs on our heartstrings and plucks the gut-strings of horror. This debut thriller author is a true storyteller, highly reminiscent of Dean Koontz.” —Dakota Banks, Award-winning author of Deliverance

Donna Galanti writes murder and mystery with a dash of steam as well as middle grade adventure fiction. She is an International Thriller Writers Debut Author of the paranormal suspense novel A Human Element, A Hidden Element (August 2014), the short story collection The Dark Inside, and Joshua and The Lightning Road (Books 1 and 2, 2015). She’s lived from England as a child, to Hawaii as a U.S. Navy photographer. She now lives in Pennsylvania with her family in an old farmhouse. It has lots of writing nooks, fireplaces, and stink bugs, but she’s still wishing for a castle again—preferably with ghosts.